Danville school board gives itself good marks for transparency 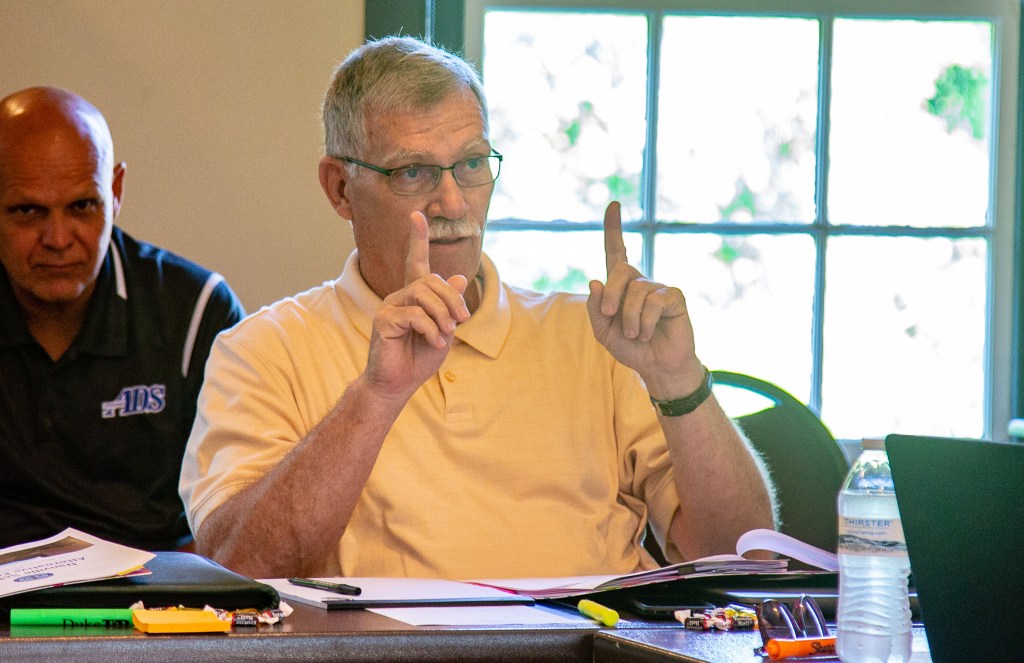 Danville school board members say they do a good job of maintaining transparency and following laws concerning the limits of board power.

But Danville community members don’t always understand why the board can’t take certain actions; or they believe the board is making illegal decisions out of the public eye, board members alleged during a six-hour board “retreat” this week.

One of the last agenda items for the marathon meeting — held at Shaker Village in north Mercer County Tuesday — concerned “expectations for board members” and planning for board meetings.

Board member Paul Smiley took the opportunity to list three areas in which he believes should be “points of information” for the board:

“I do not have any negative things to say about anybody, about anything. My purpose in presenting this is kind of a review of how we operate,” Smiley said. “We’re going down a good road and we don’t want to get off on a bad road. … We are a good board, but we want to be a great board.”

Smiley emphasized that none of his points were being made concerning the actions of any person currently on the board.

“Do not interpret a couple things I’m going to mention as though it’s happening. It is not happening,” he said. “These things are not happening. There is no evidence to that type of thing. … I think in a board retreat, we need to discuss and make sure that we continue on, don’t let other folks pull us in to start doing things that just isn’t right.”

Smiley said he believes the board is doing just fine on following the rules of order for meetings. There are no illegal meetings occurring and board members are keeping closed-session discussions confidential, he continued. 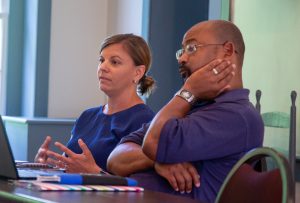 Board member Lori Finke agreed the board does a good job and took issue with members of the public who think otherwise.

“It’s always baffles me since I’ve been on the board — everybody thinks, ‘Oh, these two are talking about this, this is —’ and they want more transparency. I feel like we’re as transparent as we can be,” she said. “… I try and tell those people, ‘Come to the meetings.’ … All our meetings are open, so come. Come and see them.”

Board Chair Steve Becker said he thinks it can be hard for the general public to understand that the board of education cannot get involved with personnel decisions.

“The most difficult thing is not necessarily are we communicating, it’s what other people expect our communication should be,” he said. “When I get a call from a person that says, ‘You need to write a letter to the editor explaining everything that’s going on in the district right now,’ I try to explain to them nicely that I can’t do that because there are things that are going on right now that are personnel issues. And I said, ‘It’s not for the protection of the board; it’s for the protection of the people — the staff and the teachers and the students. It’s really a hard thing for the public to understand that by law, we cannot get involved in personnel issues.”

Becker said members of the public sometimes think the board has sway over what Superintendent Tammy McDonald decides to do with school-district staff; it does not. He drew a line between the board being informed about staffing decisions and having influence over staffing decisions.

“We don’t sit in executive sessions and we look at Dr. McDonald and say, ‘Nope, that’s not happening,'” Becker said. “That has never happened. She has her job to do. But she also feels like there are times we need to be informed.”

Becker and Finke did not mention any specific examples of their points during the discussion.

Local residents publicly expressed displeasure earlier this year over Superintendent Tammy McDonald’s decision not to keep Haley Ralston as principal at Danville High School; no explanation of the reasons for that decision have been provided to the public and McDonald has said she cannot and will not be providing information about the reasons.

Last year, there was also a public outcry when the school board voted 3-2 not to renew Keith Look’s contract as superintendent. At that time, a group of more than 100 Danville residents organized to oppose the move, claiming board members had discussed or even decided what to do with Look’s contract illegally, outside of public meetings. Three current board members — Becker, Finke and board member Troy McCowan were on the board at the time of that vote. Becker and McCowan voted against the move away from Look; Finke voted in favor.

Later in the conversation, Finke said, “I just also think it’s the nature of the world we’re in these days, with everybody has a comment on something. There are a lot on social media … it’s interesting what people will say on there and then I call or reach out and say, ‘Hi, do you want to talk?’ And they’re like, ‘Oh no, I’m good.’ It’s like, OK, then we’re not talking.”

“But as far as transparency, no one showed up today,” Finke continued. “For the crowds that want to know everything, this would have been a really valuable one to come to.”

“Well for some, it’s easier to post something on social media than it is to appear as a concerned citizen and have that same thought come across to the board in person,” Becker said. “I would really rather folks would start doing that.”

Finke suggested publishing audio or video of board meetings for the public to watch could help; Becker tentatively agreed. McDonald said that could be good, but noted people post false things online about board meetings even when the real information is available.

“I agree, I think the more we can put it out there, the better, and I’m willing to do all those things — but realistically realizing that people will still post inaccurate information,” she said.

“I don’t think it’s wrong of us to reach out to folks … we always have to regard folks, whether they have children in the school district or not, they are stakeholders in our district. So their opinions are valuable,” Becker said.

“That’s the point — it’s public education,” McDonald said. “What we do is for the good of our community, not just a family with young children. The students that graduate from the high school are going to come back and live and work in our community … and whether it’s the hospital emergency room, helping us there, or down the road and we’re 95 and living in an assisted living facility, and they’re helping us there.

“All of these students that graduate will touch our lives — every one of them — at some point in our life. That’s why it’s called public education. It’s for everybody and absolutely every person in our community is a stakeholder and should have say in and be invested in what we’re doing.”