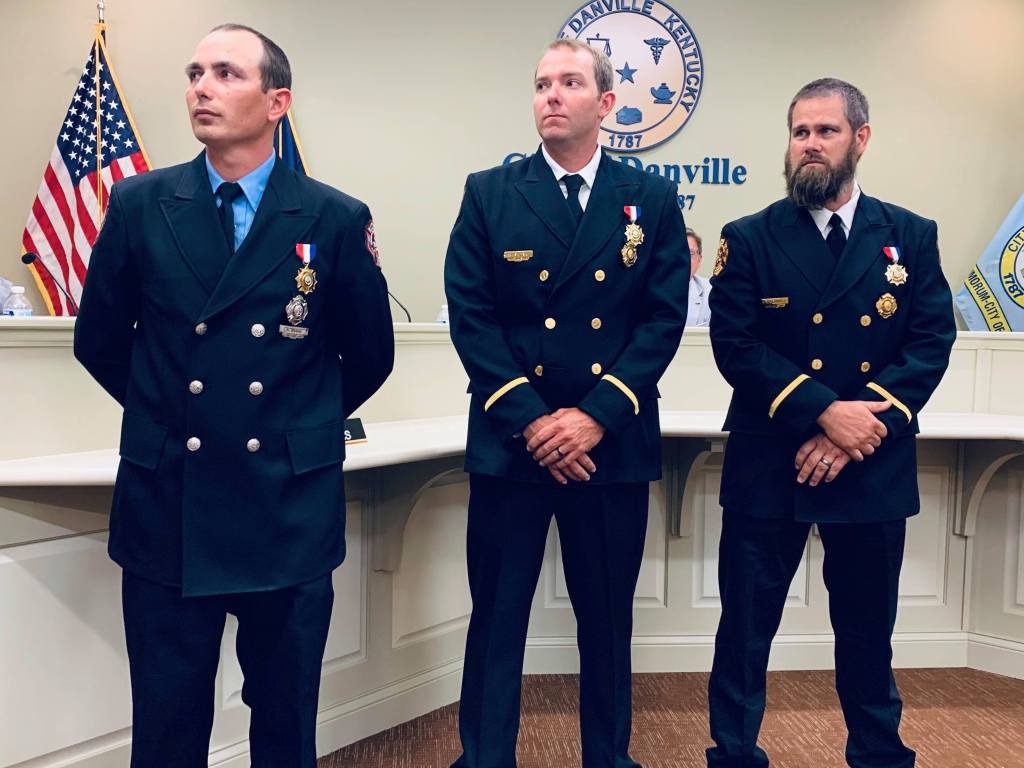 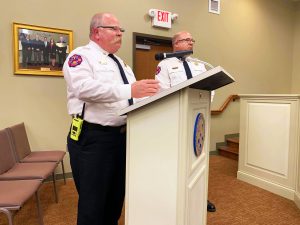 Mayor Mike Perros said their service is so incredibly valuable, but it’s underestimated “and sometimes unappreciated.” He was talking to three Danville firefighters who were pinned Monday night with the Life Saving Award medal.

Firefighter Michael Bugg, Lt. Matthew Groves and retired Lt. Scotty Caldwell stood at the front of the room in dress uniforms as Deputy Chief Tim Brumfield introduced them. “You may recognize Scotty — the last time he was here was to celebrate his retirement, and he still had a couple of shifts left to go.”

Then, on the morning of Dec. 19, at 2:14 a.m., Danville 911 received a call about a six-unit apartment building on Nokomis Street, with smoke and fire coming out of one unit.

“The caller believed that the apartment was still occupied at that time,” Brumfield said.

He said that prior to the Danville Fire Department’s arrival, some of the neighbors had kicked the apartment door in, attempting to rescue the occupant.

“Shortly thereafter, the Danville Police Department had arrived on scene, and also attempted to rescue the occupant. They were pushed back by the heat and smoke, and were unable to reach the victim,” Brumfield said. He added that they sustained minor injuries in the attempted rescue.

He said the police went from door to door in the apartment building, to make sure everyone was evacuated from the structure. “When Engine 12 arrived on the scene and Battalion 2, Engine 12 pulled a hoseline and made entry into the apartment. They were faced with heavy smoke and heat conditions,” Brumfield said.

But they made their way through the apartment, searching, and found an unconscious victim at the foot of the bed, on the floor of a bedroom that was on fire. 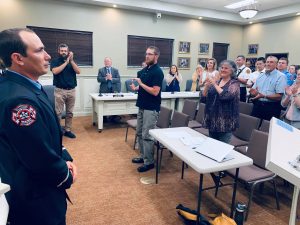 “Under these fire conditions, they removed the victim from the building and began patient care. Once Boyle EMS arrived on the scene, Troy Gammon and Andrew Green were on that unit,” Brumfield said, explaining that Gammon previously was a part-time firefighter with the city, and Green still is.

He said the patient was transported to Ephraim McDowell Regional Medical Center, then flown via helicopter to a Louisville hospital and was treated within the burn unit.

“Due to the heroic rescue of that night of Caldwell, Bugg and Groves, the victim survived. A few months later, they were released from the hospital and came home.”

The trio received a standing ovation, and Perros commended them, saying he knew their jobs could sometimes feel unappreciated. “But there are occasions like this that become a reminder to us, and hopefully to you, as to how much we do value and appreciate all that you do, sometimes unknown,” he said. “So, thank you.”

Perros said the praise was “on behalf of the city commission … and as well as all Danvillians.”

Commissioner J.H. Atkins said he’d like to offer “an amen, but also I think what they did is worth another round of applause.”