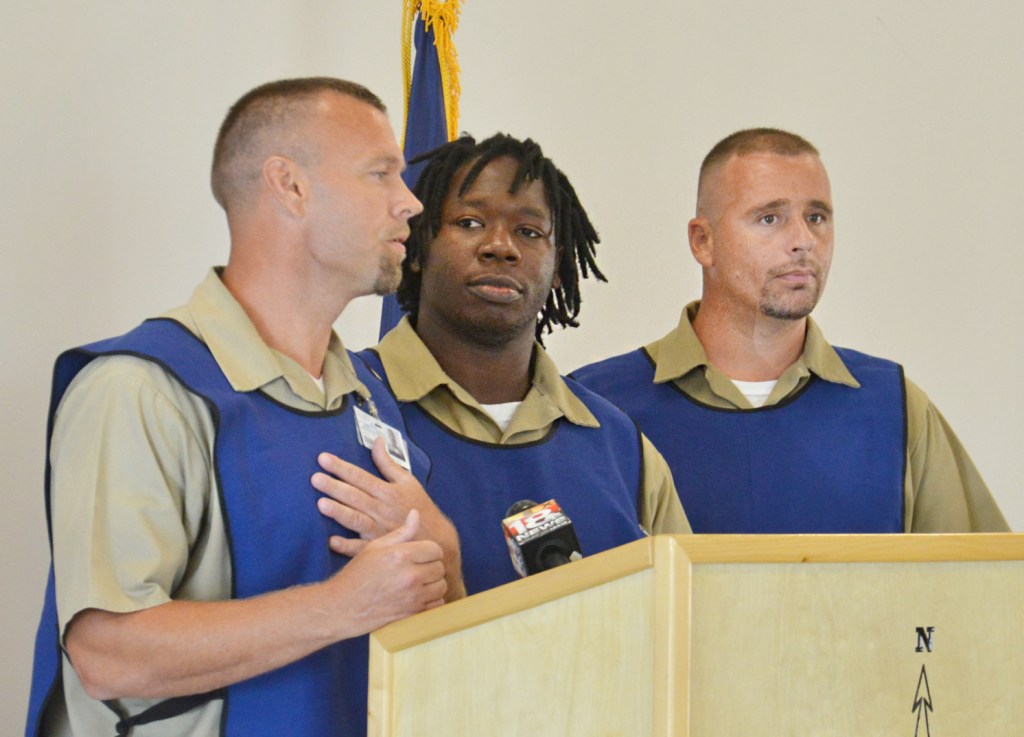 A new and innovative program to help inmates at Northpoint Training Center adjust to life after their substance abuse recovery is the first one of its kind in any Kentucky prison. 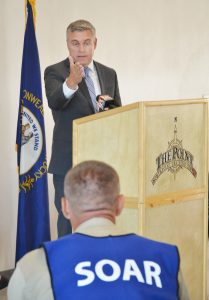 Kentucky Justice Secretary John Tilley points to an inmate during the announcement about the innovative, substance abuse aftercare program for inmates at Northpoint Training Center. SOAR stands for Supporting Others in Active Recovery. (Photo by Robin Hart)

On Tuesday, Kentucky Justice Secretary John Tilley, along with NTC Warden Brad Adams and Substance Abuse Division Director Sarah Johnson announced the first ever aftercare program within a Kentucky prison, providing a new system of support, mentoring and peer accountability for offenders in recovery from a substance use disorder, according to a news release from the Kentucky Department of Corrections.

The program, known as SOAR (Supporting Others in Active Recovery), focuses on relapse prevention, education and re-entry skills based on the Therapeutic Community Model — a group-based, residential approach to treating substance abuse. The evidence-based strategy seeks to reduce recidivism and set the stage for long-term recovery before inmates return to communities, according to the release. It is being funded in part by a $300,000 grant from the Kentucky Office of Drug Control Policy and was made possible with opioid-response appropriations in the state budget.

As he was welcoming a group of visitors to NTC for the announcement, Warden Adams said Danville was “The City of Firsts,” boasting of the first courthouse in Kentucky; the first U.S. post office west of the Allegheny Mountains; the first state-supported school for the deaf; and the world’s first known successful ovarian surgery. “I say that because Northpoint Training Center strives to be the first in noble causes.”

The SOAR program actually began three months ago and has 44 participants. They’re easily identified from the general prison population because of the royal blue vests they wear with the word “SOAR” written in large white letters on their backs. There are slots for 44 more inmates, Tilley said. 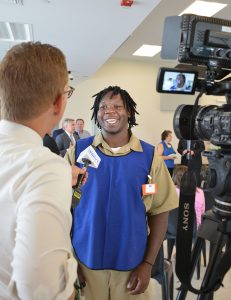 Gevoyl Beauchamp speaks with members of a news station. (Photo by Robin Hart)

The program is available to inmates who have completed a substance abuse program or graduated from Moral Reconation Therapy (MRT). They must also have 60 days of clear conduct, meet the appropriate risk classifications and maintain a voluntary job assignment within the program, which could include tutoring and mentoring to the inmates who have recently started the six-month recovery program.

Each participant is assigned to a social service clinician who assists with the development of an individually tailored treatment plan. Upon completing the My Ongoing Recovery Experience (MORE) Curriculum — developed  by the Hazelden Betty Ford Foundation — participants will receive 90 days of good time credit. The program takes a minimum of six months to complete. However, they may request to stay in the program until their release date, Tilley explained. “Often when they return to general population after substance abuse recovery program, they face the same difficulties as they would on the outside … We have treatment. The key difference here is this is about the aftercare.”

While living in the SOAR dormitory, inmates can engage in other evidence-based programs to earn good time credits of at least 120 days by completing such programs as MRT parenting, MRT anger management, soft skills boot camp and “new directions,” which provide valuable skills that help support a successful transition back into the community, according to the release. 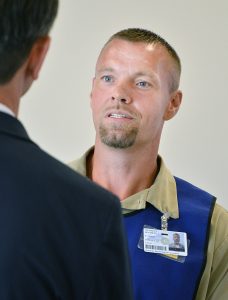 Michael Reynolds talks about why it is important for him to participate in Northpoint Training Center’s new SOAR program on Tuesday. (Photo by Robin Hart)

The Department of Corrections “has made tremendous strides over the past three years to strengthen treatment behind prison walls,” Tilley said. “Drug treatment is one of the most effective tools we have to reduce recidivism and protect public safety, and I’m incredibly proud  of DOC’s leadership and innovation on this front. We must always seek to set the highest policy standards, both for Kentucky and the nation.”

Tilley said studies have shown that more than half of Kentucky’s prison inmate population are incarcerated because of the drug epidemic.

“It takes about eight and a half years with four or five attempts of recovery to gain one year of sobriety,” Tilley said. “That’s why this program is so critical. It doesn’t look at treatment as some 28-day program or a six-month program or a year-long program. It looks at it as a life-long commitment to clean and sober living. That’s what this is.

“The aftercare model is so important. It’s a life-long commitment to recovery. You don’t complete a recovery and just walk out the door … and plan to start living and it’s over. That’s the key. We hope to replicate this program in all of our facilities and we’d love to incentivize county jails to do 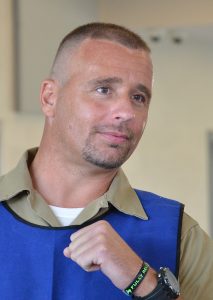 Deputy Warden Shea Carlson said NTC is “trying to be proactive” in helping inmates become productive citizens after serving their time. “If the community is doing it, the prison should do it too,” she said. “… This is important because they are going to be our neighbors one day. We’re not doing our part in just locking them up.”