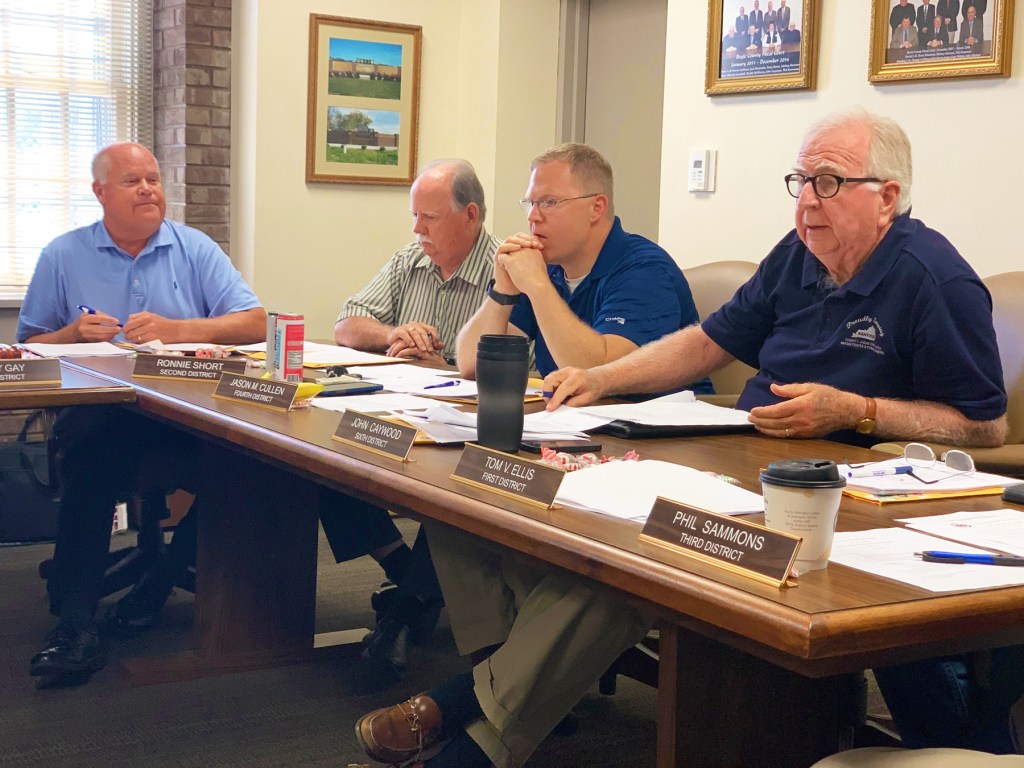 Boyle County Fiscal Court will provide $2,500 to help land a spay/neuter grant for the local humane society. But one magistrate expressed frustration with the approval outside of the budgeting process, and the county treasurer cautioned the court about “getting into the business” of spaying and neutering animals.

The matching grant is through the Kentucky Department of Agriculture’s Spay/Neuter Kentucky Program, to be used mostly at Happy Paws, which provides low-cost services based on income.

John Turner, a Danville-Boyle County Humane Society board member who also volunteers for the Mutts with Manners program, appeared before the court Tuesday after he’d just found out about the grant the night before.

“I’m the one they talked into coming,” Turner said, which received laughter. He explained the humane society has seen a big decrease in puppy litters brought in, “but we still have a ton of cats coming in every year.” He said last year’s grant paid for 118 spay/neuter surgeries.

Treasurer Mary Conley said in the past, Happy Paws has always taken advantage of the state grant, but it had never required matching until last year. She said the fiscal court considered the grant at the last minute and participated in it.

“I administered the grant and did the follow-up documentation in a timely fashion,” she said. For this year’s grant, Conley said she was made aware of it “four days before our second reading of the budget,” and she needed additional information, like why the grant went from requiring a minimum of $2,000 to now $2,500. She said she didn’t receive what she needed in time to include it within the appropriations.

“But I think it’s important Happy Paws also be here to talk about their program,” Conley said. She said the question for Fizzy Ramsey, president of the humane society, is, “So, we’re considering this again at the last minute? Because it’s due July 15.”

Thursday, Ramsey said the humane society received the information about the grant around mid-June. And although Happy Paws is doing the work, she said it’s the humane society board’s responsibility to help them continue that through adequate funding.There are also other area vets who perform surgeries paid for through the grant, as well.

Tuesday, Conley reiterated that the county has never contributed to this grant until last year. “So they’ve been doing spay and neuter in Boyle County for many many years, it’s just been funded by different agencies and different areas and donations. Now we’ve got a change in the way we’re doing business. Is this the business we’re going to get into, spay and neuter?”

She said perhaps the grant is something the county and city could rotate sponsoring.

Magistrate Ellis announced that he is “the most fiscally concerned person in this room with taxpayers’ money, maybe besides Jason,” then spoke John Hambel’s praises (shelter manager/animal control director) due to a situation in his district with 12 dogs found in an abandoned trailer.

“They gathered them up in 36 hours,” Ellis said, then calculated the amount it would take to spay/neuter just those 12 dogs. “You’re talking over $700, plus any upkeep and vet bills, treating diseases …”

Cullen asked Turner, “How much money did we spend on neuters last year? Did we spend $5,000 on spay and neuter?”

The county does pay the shelter’s electric and water bills.

Cullen pointed to the fiscal court’s agreement that “we don’t approve out of the budget … And now they’re asking for $2,500 when this could’ve been handled two weeks ago.”

Conley explained that because she received first notice of the grant on June 20, she had too much on her plate to deal with it when the information she needed was returned on June 24, the day before the fiscal court meeting. “I apologize,” she said.

Cullen told her there was no need. “It’s not your job to chase down every person that wants a grant out there. Two years ago, this probably sounded like a good deal, because we didn’t have to kick into it. I don’t think it’s a good deal right now.”

“It’ll be cheaper than dealing with a bunch of unwanted animals,” Turner said. “And the toll it takes on your staff euthanizing animals … So there’s a benefit from the money for the county — they’re your all’s employees. They don’t work for me.”

“Well, the people we have out there don’t like it, either. And it takes a toll,” Turner said. He added he can understand the amount not being in the county’s budget, “but there are benefits to the county from this.”

“So, I’m going to finish what I was saying,” Cullen said. He said there is a large, local community giving to the humane society, so the court “can’t just keep throwing public tax dollars at every entity we have. At some point, there needs to be some fundraising that happens. While I don’t want to have animals killed or whatever, there’s no guarantee … that we’re not going to end up euthanizing anyway.”

“Hey,” Sammons said to Cullen. “This came up and this guy didn’t know anything about it.”

“Let me clarify something,” Conley said. “This is an annual budget that’s done every, single year and everybody knows when it comes around. There just needs to be better communication. And I understand we’re dealing with volunteers versus paid personnel, but …”

“We do a lot of fundraising,” Turner said.

The humane society brought in $4,000 from the Doggie Dash 5K; pet sponsorships brought in $2,400; miscellaneous T-shirt sales go on year-round and vary; $8,000 was raised during the last Pints for Pets; around $24,000 has been obtained through PetSmart grants and programs; and monthly donations are accepted, including some due to a regular fundraising letter. They get some kennel sponsorships, and participate in Kroger and Amazon rewards programs for non-profits.

Cullen said while $2,500 is “not going to break the bank on its own, we have a whole list of appropriations that we just went through … $700,000 and we’re already in a shortfall. … So, if it’s important, then we need to get this in on time, not last minute.”

“Everybody knows this was not John’s issue of it being late,” Hunt said.

“Of course not. John, I appreciate you being here and speaking up, but if this was really this big of a deal, we should’ve had people here from the humane society to take care of this, not the last minute,” Cullen said.

Turner said, “We were supposed to come a couple of weeks ago, and got canceled.”

“I’m sorry, what?” Cullen asked, and Turner repeated himself.

“That was because of me,” Conley said. “I didn’t get the information until 12 hours before the meeting. I have to sit down and redo the whole budget …”

Sammons said if Cullen thinks the grant will “break the bank, I’ll write a check for $2,500.”

The matching grant was passed 5-1, with Cullen voting against.

“Stuff like this is going to cause a tax increase, we just gotta remember that,” Cullen said. “And that’s the last thing I’ll say.” He then asked Turner, “Where are we on licenses?” referring to making sure when dogs are “collected and returned that they have a valid license.” He said he was told the humane society doesn’t enforce this.

Cullen said not to compare the two, but if the sheriff picks someone up, they run their identification to find out if they have any warrants. “I’m just saying. If we’re looking for money from the fiscal court and missing opportunities to collect money …”

Turner said if someone reclaims a dog from the shelter, it must have a valid license before leaving. Cullen asked about the cases where a dog is picked up and has an ID tag on it, and it’s taken back to its home.

“You mean, if I was out and found a dog and took it home? I’m sure they don’t go around just checking for licenses,” Turner said. He said the humane society doesn’t sell a whole lot of licenses.

“Guess you don’t need to when the bank of the county is open,” Cullen said.