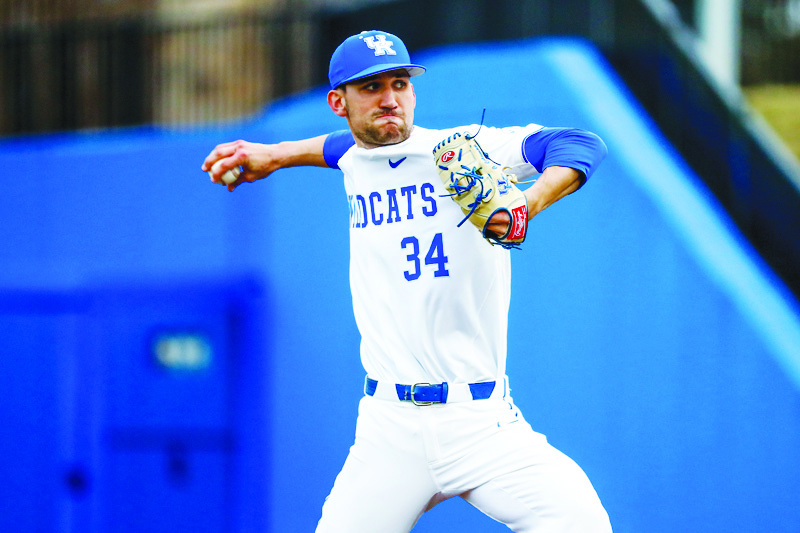 The right-handed Coleman has elected not to sign professional contract after being selected by the Tampa Bay Rays in the 2019 MLB Draft. (Photo by Chet White | UK Athletics)

LEXINGTON, Ky. – Kentucky right-handed pitcher Carson Coleman will return to Lexington for the 2020 season, opting not to sign a professional contract after being selected by the Tampa Bay Rays in last month’s 2019 Major League Baseball Draft, it was announced Friday. Coleman will be a redshirt junior with two years of collegiate eligibility remaining.

Coleman, a Lexington native, led the Wildcats with five saves during the 2019 season while appearing in 23 games. In 28.0 innings of work he allowed just 24 hits and struck out 36, posting an average of 11.57 strikeouts per nine innings. Opponents hit just .235 against him overall with left-handed batters mustering a .191 mark (9-of-47). He is on track to graduate next spring.

“Playing professional baseball has been a dream of mine since I was a kid and I can’t thank the Tampa Bay Rays enough for giving me the opportunity to make that a reality,” Coleman said. “However, I believe there is more for me to accomplish and more growth to experience before I begin that journey. As such, I’m excited to say that I’ll be returning to the University of Kentucky for my junior season. Our job is not finished in Lexington, and I can’t wait to get back to work with the boys. Go Cats!”

With a fastball that routinely sat 92 to 94 miles per hour, Coleman was a handful on the mound for opponents. He caught the attention of the Rays, who selected him in the 33rd round of the draft. In 43 appearances over two seasons, he has gone 5-5 with a 4.31 earned run average, striking out 68 against 37 hits allowed in just 48.0 innings.

Coleman earned two wins on opening weekend at Austin Peay last season and had a stretch from March 10 to April 14 where he did not allow a run in nine of 10 appearances.  He earned a critical save on May 5 vs. fifth ranked Arkansas by inducing a game-ending double play to strand the tying run at third base after entering with one out. He also struck out a season-high five hitters on April 5 at Missouri in two innings of work to earn a save and on four occasions he struck out the side in an inning.

This summer, Coleman is playing with the Brewster Whitecaps of the prestigious Cape Cod League, his second such summer with the club. He has recorded two saves in three appearances.