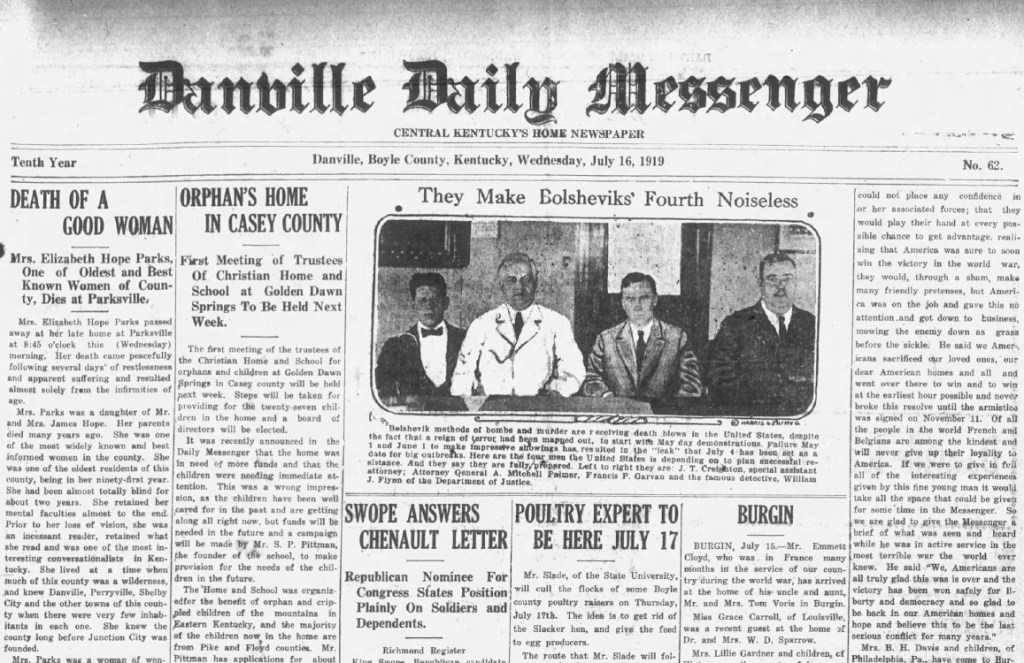 The front page of the Danville Daily Messenger from 100 years ago — July 16, 1919. (Advocate-Messenger archives)

The history on Danville-Boyle’s front page 100 years ago reached another 91 years into the past. The lead story on July 16, 1919, was the death of Elizabeth Hope Parks, “one of the oldest and best known women” in the county.

Parks was 91 years old when she died, placing the day of her birth in the late 1820s.

“She lived at a time when much of this county was a wilderness and knew Danville, Perryville, Shelby City and other towns of this county when there were very few inhabitants in each one,” the paper reported. “She knew the county long before Junction City was founded.”

Parks may have lived an exceedingly long life, but The Danville Daily Messenger as the paper was known at the time reported that “she never grew old.”

“She had been almost totally blind for about two years,” according to the story, but “she retained her mental faculties almost to the end. Prior to her loss of vision, she was an incessant reader, retained what she read and was one of the most interesting conversationalists in Kentucky.

“… While her memory ran back to the long, long ago and her recitals were extremely interesting, she looked to the future and continued to mention the possibilities of the years to come.”

The paper also reported that Parks had been “a woman of wonderful courage and a woman of convictions. She never hesitated to express her opinion on all questions. … If she approved of one’s conduct, she let it be known. She was equally as candid if she thought one was in the wrong.”

Alice Brownfield, Parks’ only surviving child out of five who grew to be adults, was listed as the only survivor; Parks was buried in Parksville Cemetery.

Other items on the front page 100 years ago included:

• A new device that routed steam from a steam engine out the back instead of “allowing it to be exhausted against the ceiling of the tunnels a few feet in front of the cab” was likely to help prevent a major railroad strike.

• A poultry expert would soon visit Boyle County to help cull farmers’ chicken flocks. “The idea is to get rid of the slacker hen and give the feed to egg producers.”