Barbasol Championship near and dear to Hunter Stewart 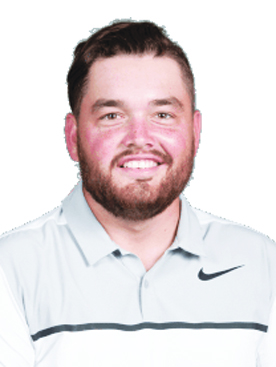 NICHOLASVILLE – When Hunter Stewart tees it up in the Barbasol Championship next week, it will be an experience he has fantasized about since he was first learning the game on the very course that is now home to Kentucky’s only PGA TOUR event.

“I grew up playing Champions (at Keene Trace),” Stewart said. “My parents live two miles down the road, and they joined there in 2004, and that’s when I started playing.

“So, obviously, this event is near and dear to my heart.”

Stewart, who figures he’s played Champions a thousand times, remembers as a kid imagining what it would be like to play in a PGA TOUR event on his home turf.

“So when they announced (in the fall of 2017) that they were bringing the Barbasol here, it was awesome,” he said. “(Co-owners) Evan Mossbarger and B Frye have put their heart and soul into Keene Trace. It’s great to see the fruits of their labor.”

Stewart hoped to play in last year’s inaugural Barbasol Championship at Keene Trace, but he wasn’t offered an exemption. He wasn’t sure it would happen this year until Mossbarger called him in early June to tell him he was in the field for the $3.5 million tournament.

“It’s a dream come true for me getting to play under the lights at home,” he said.

His dad is just as thrilled.

“Hunter grew up playing out there, and it’s where we kind of grew up as a golfing family,” Jon Stewart said. “I think he was 14 when he finally beat me for the first time, and I don’t know if I’ve beaten him since.

“I’m just thankful for him to get this chance on a course he grew up on, and the course I love. There’s a little bit of satisfaction after all the hard work he’s put in, to get a chance to do something he’s dreamed of doing.”

Hunter Stewart should be familiar to golf fans in Central Kentucky. He is one of the most accomplished high school and college players Lexington has ever produced.

As a junior at Lexington Christian Academy, he was runner-up in the KHSAA state tournament, losing in a playoff to Justin Thomas of St. Xavier. (Thomas is now the 9th-ranked player in the world.)

As a senior at LCA, Stewart was individual state runner-up again and led the Eagles to their first state championship.

He went on to have a standout career at Vanderbilt. He was SEC Player of the Year, finished third in the NCAA Tournament, and was a first-team All-American.

After playing in the prestigious Walker Cup, he turned pro in the fall of 2015.

Stewart had some early success on the PGA TOUR, including a top-10 finish in the 2015 Mayakoba Classic where he pocketed $137,433.

He looked ready to make a steady living on the highest level of professional golf.

But, so far, it hasn’t turned out that way.

“I’d say my pro career could be characterized by near misses,” Stewart said.

Over the past few years he’s just missed qualifying for the Web.com Tour (now the Korn Ferry Tour) and the European Tour, and he has failed to get out of Q school.

“After I first turned pro in 2015, I had a great finish (at Mayakoba) and I think my expectations got a little out of whack,” he said.

“When you show up for a tournament and expect things to go a certain way, and then they don’t, it’s pretty easy to get disappointed or frustrated. I think that happened to me. I didn’t play great golf for a while.”

Lots of players he competed against in college are thriving on the PGA TOUR, which gives Stewart positive thoughts.

“I know I have that in me,” he said. “It’s just a matter of getting the opportunity, being patient, continuing to get better, and then making it happen.

Stewart can’t wait to get back home for the Barbasol Championship.

“I’ve shot some low numbers at Champions,” he said. “I shot a bunch of 64s there over the years. That was always my magic number.

He knows it’s a double-edged sword playing on your home course in front of family and friends.

Stewart certainly won’t lack for fan support next week. His parents (Jon and Melissa) and sister (Annie) along with aunts, uncles and grandparents, and high school and college buddies, will be there to cheer him on.

“It’s not just another golf tournament,” Jon Stewart said. “But we want to keep the home environment as normal as possible for him, try not to get too worked up or keyed up about everything. I’m not sure that’s going to be the case, but we’ll try.”

Hunter was in town a couple weeks ago and got a chance to play Champions again for the first time in a couple years.

“I played some casual rounds with my dad and couple of his friends, and we had a good time,” he said. “There’s definitely still a lot of comfort being around Keene Trace for sure, and I’m looking forward to that comfort when I play in the Barbasol.”

For complete information on the Barbasol Championship please visit: www.barbasolchampionship.com