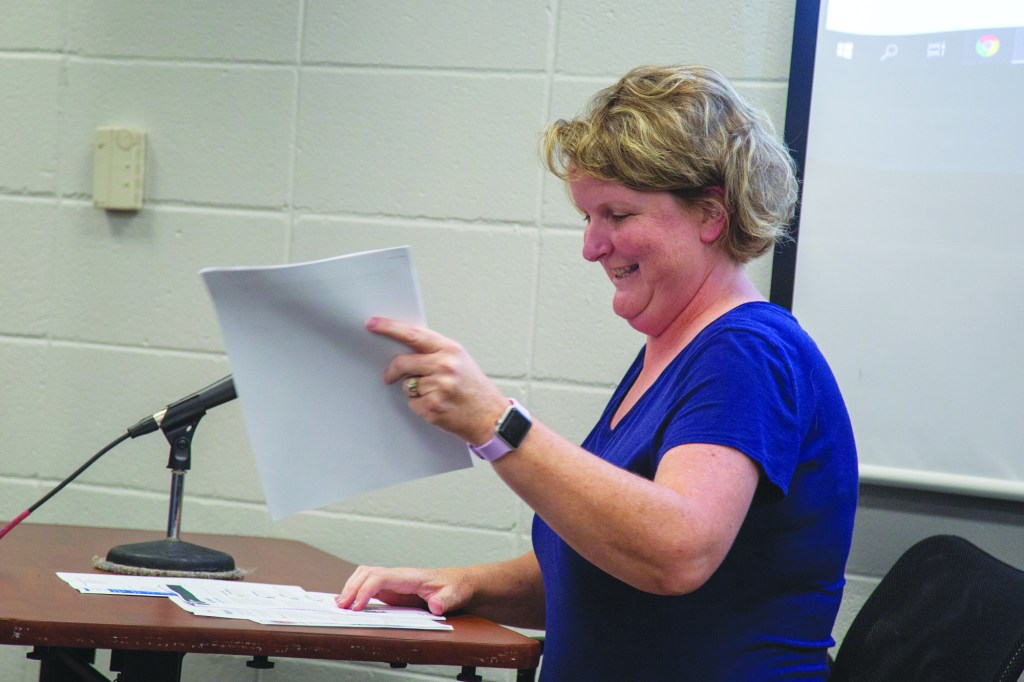 Danville Athletic Director Lisa Fisher presents to the school board a proposal to create an eSports program. The board voted to fund the program Monday night.

The Danville Board of Education voted unanimously Monday night to create eSports as a sport in the school district and provide stipends for a coach and assistant coach.

The total annual cost of the program is expected to be around $5,000 to $5,500, according to Superintendent Tammy McDonald and Athletic Director Lisa Fisher.

“The biggest thing I’ll need help with is realizing that eSports is just so much more than video games,” Fisher said. “… eSports has just blasted the country in the last little bit. There’s a lot of scholarship opportunities for kids.”

Fisher said there is a good amount of interest in eSports among Danville students already, and there have been some test games played over the summer months. Fisher told board members the high school’s computers are largely already powerful enough to run the games that students compete in. A few computers may need RAM upgrades or other small improvements.

eSports is sanctioned by the Kentucky High School Athletics Association. Fisher said there is a $65 registration fee for each competitor and the district is planning to spend $15 or $20 per player to get them a quality pair of gaming headphones. Outside of those costs and the coach stipends — $1,500 for the head coach and $1,250 for the assistant coach — there really isn’t much cost to the program, she said. It’s similar in cost to the school district’s bass fishing, bowling and archery programs.

But with eSports, there’s no travel costs unless a team makes it to the post-season — all regular-season games will be played right from schools in the district, either Danville High School or Bate Middle School, Fisher said.

The school board approved creating 25 slots in the program initially, which would allow for up to five teams of five players to participate. Students at the middle and high schools could participate. Fisher said she thinks the district will probably wind up with two to three teams at first.

“There’s a lot of excitement about eSports amongst our kids and I think we will be targeting different kids than the kids that are already on our athletic teams,” she said. “I think that’s important.”

Right now, Boyle County Schools is the only other district near Danville with an eSports program; a Boyle County team earned the state eSports championship last year. Fisher said Fayette, Jefferson and Oldham counties have all fielded eSports teams previously.

Board Chair Steve Becker said eSports is growing in popularity.

“It’s going to happen,” he said. “Talking to other boards (of education), they’re more than interested.”

Board member Lori Finke said she’s read there are concerns about the level of violence in League of Legends, the game played in the fall eSports season. Fisher said she’s aware of the concerns and the district plans to address those by requiring parent permission slips for the fall season, which acknowledge the parent is aware of the level of violence in the game and is OK with their child playing.