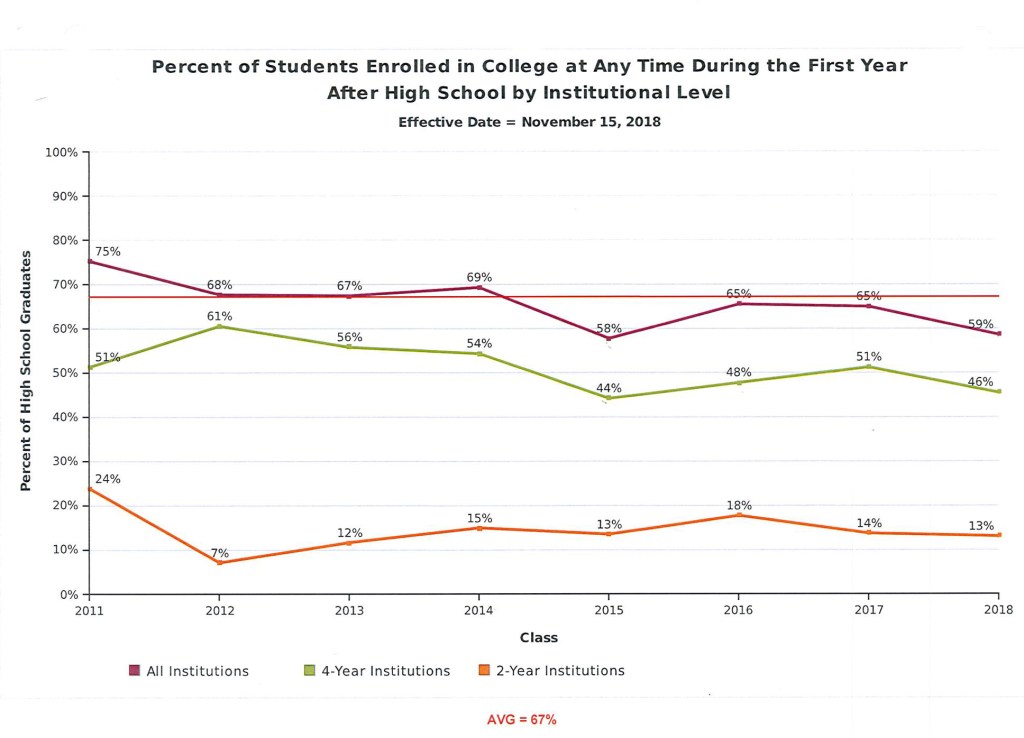 Data from Danville Schools shows a downward trend in the percentage of high-school graduates pursuing post-secondary education after graduation. The rates of enrollment in both 4-year and 2-year institutions were lower in 2018 than they were in 2011. (National Student Clearinghouse)

The percentage of Danville High School students pursuing further education the first year after graduating fell by 16 percentage points from 2011 to 2018, according to data from the National Student Clearinghouse.

That’s a stat the Danville Board of Education hopes to change. Out of the gates, officials want to help students better find the funding they need to pursue more education. 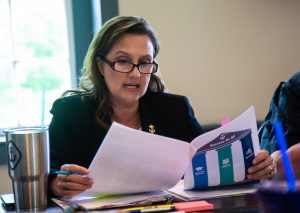 “This is not a Danville problem; this is a national problem that you see that trend,” Superintendent Tammy McDonald said. “But we want to turn it around for ourselves.”

The NSC data shows that in 2011, 75 percent of Danville graduates were enrolled at a post-secondary institution at some point during their first year after high school. That means about three out of every four DHS grads attempted to further their education after high school.

The percentage has trended downward since. In 2018, just 59 percent enrolled in a program after high school — closer to just two out of every four graduates.

McDonald said the “number-one barrier” for many of Danville’s grads is financial — they simply don’t have the money to enroll. That’s why the school district wants to do a better job helping connect students with available scholarships. And it wants to walk students and their families through the complicated, oftentimes painful process of applying for federal education loans and funding, which is known as FAFSA.

McDonald said she has gone through the FAFSA process with her son, who is in his second year of college. “It was exhausting for me,” she said. “… I’ll admit — FAFSA is complicated and it’s a pain to deal with. … I get irritated every year with it.”

So, the school district hopes to offer “FAFSA nights,” when parents and aspiring graduates can come and learn how to move through the process and avoid sketchy, “fly-by-night” websites that may not have a student’s best interests at heart, McDonald said.

The district also wants to improve communication about many of the community scholarships that are available in smaller amounts. There’s a “huge misconception” that scholarships offered by local businesses in the amount of a few hundred dollars, for example, are only for students attending four-year colleges. That’s simply not true, McDonald said.

As a result of that misconception, many students interested in two-year colleges or pursuing a professional certification don’t apply, even though those local scholarships can go a long way toward covering the cost of attending a technical school.

“Students that leave high school with no post-secondary training — not just college, but no training — their average income five years out is around $11,000 to $12,000,” McDonald said. “… That is very alarming. That is well below the poverty line. You’re not going to support your family, let alone yourself. You’re definitely not going to be able to earn a living that lets you care for your family. So some type of post-secondary training is extremely important.”