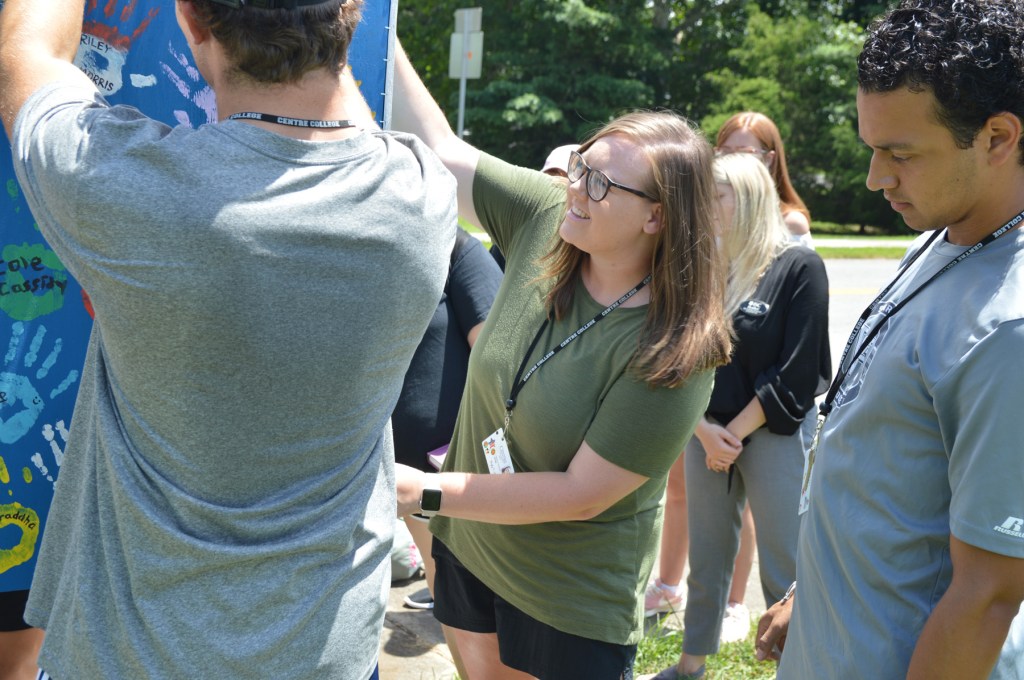 Hayley Hoffman, center, works with her students in the Governor’s Scholars Program for the Arts Tuesday as they install a Little Free Library in front of Toliver Elementary School. The project was part of the children’s literature course she is teaching. (Photo by Bobbie Curd)

Although Hayley Hoffman graduated from Centre College in 2016, she found herself back on campus this summer — this time, as a Governor’s Scholars Program instructor. In between classes, she took a quick break to discuss what the last five weeks teaching at GSP has meant to her. 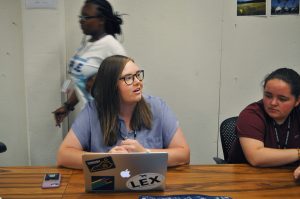 After obtaining a bachelor’s in English and a master’s in communications, Hoffman is now working on a Ph.D. in communications at the University of Kentucky. She was looking for something to do over the summer.

“A fellow grad student at UK told me about a great summer job she had, where they really valued experimental and innovative teaching,” Hoffman said.

She said she “went ahead and applied, and somehow, I got it.” Applicants don’t always get to be a faculty member on their first time around, Hoffman said.

“And that I got to be at Centre was just incredible.”

“Just incredible” is the way Hoffman continues to describe her time as a GSA instructor. She teaches a journalism class and one on general studies. She has 19 scholars, which are high school students, in each class.

For general studies, instructors were encouraged to teach something that is important to them. Hoffman chose children’s literature, which is a passion she discovered when going to school at Centre.

As their last project, the class worked together to create a Little Free Library. The neighborhood book exchange locations are in front yards and communities across the nation, and millions of books are shared through them every year.

Hoffman’s class installed the library box Tuesday morning at Toliver Elementary School, then filled it up with books later in the day.

“Each scholar got to pick out a book, and they each wrote letters to the readers,” Hoffman said. She decided on the project because she often uses the Little Free Libraries located throughout Lexington.

“There wasn’t one here that was registered through the organization,” Hoffman said, referring to the online map at littlefreelibrary.org, where all registered boxes can be found worldwide. “Ours will be the first that appears on the map of Boyle County.” 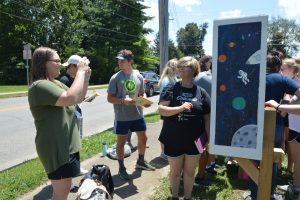 To document the full project, instructor Hayley Hoffman videos her GSA scholars as they place books inside the Little Free Library they designed, built and installed in front of Toliver Elementary School. Each scholar also included a letter to the reader inside the book they chose to include. (Photo by Bobbie Curd)

Hoffman also led the class on studying what makes a good and a bad children’s book. “For instance, picture books specifically are important to childhood development. It’s a passion of mine.”

Reading has always been an important part of Hoffman’s life, she said, beginning when she was very young.  “The things you pursue in your life — the things I’ve been inspired to do certainly come from the books I’ve read.”

In the journalism class she teaches, the scholars have been putting their own paper together every week in an online version. The students produced and edited all of the content themselves.

When the class began, Hoffman said there were many who were unsure if they wanted to pursue journalism as a career. “Now, a lot of them are thinking they want to do that major, or at a minimum, write for a college paper. That made me really happy.”

Hoffman interned at The Advocate-Messenger in 2014, writing everything from hard news to entertainment features and covering sports. She went on to become the editor of The Cento, Centre’s college newspaper, her senior year.

“We’ve discussed in our classes that journalism is a way we distribute knowledge to communities, inform voters and uphold the foundation of democracy,” Hoffman said. “Without budding journalists, I don’t know how that would continue to go on.”

She said she tried to impress upon the scholars how “our country needs responsible journalists. So hopefully, this has opened their eyes as to why it’s important, and even inspired some of them to do it.”

Hoffman said the high school students have taught her a lot, too.

“Oh, I’m constantly learning from the scholars, every day. They bring all sorts of ideas into the class, all new perspectives, spin it in new ways. They constantly surprise me,” Hoffman said, adding that they renewed her passion for teaching. 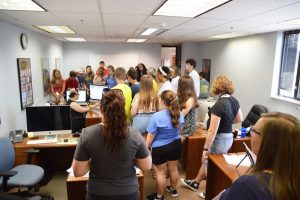 Hoffman, who is originally from Ohio, said she would eventually like to be a college professor. “And I love Danville. I’d love to come back here and work.”