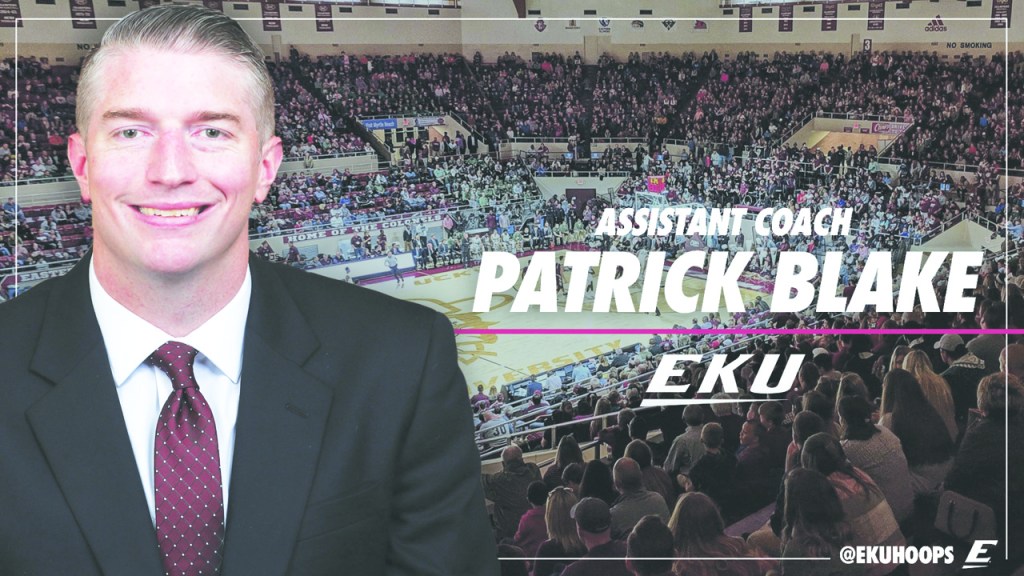 “It’s with great excitement we welcome Patrick Blake into our basketball family at EKU,” Hamilton said. “I’ve admired Pat for a long time. He was one of the best junior college head coaches in the country during his time at Chipola. As an assistant at Coastal Carolina, he recruited several of my players at Hargrave that were a cut above the league they were in. I was also blown away by his professionalism and work ethic during each recruiting process. He gives us another tremendous coach that is well rounded in all the areas that impact winning.”

In his first season with the program (2015-16), Blake helped guide Coastal Carolina to a 21-12 record and a berth in the CollegeInsider.com Postseason Tournament. On March 15, 2016, CCU defeated Mercer, 65-57, for the Chanticleers’ first-ever national postseason victory. CCU won two more games before falling to UC Irvine in the semifinals of the tournament.

In 2016-17 (Coastal Carolina’s first season in the Sun Belt), Blake and the Chanticleers went 20-19 and qualified for another postseason tournament, the College Basketball Invitational (CBI). CCU made an even deeper run in that tournament, winning four games and advancing all the way to the CBI Championship before falling in a three-game series to Wyoming. Over the course of the season, the Chanticleers set program records for points scored (2,833), field goals made (1,021), three-point field goals made (318), rebounds (1,574) and rebounding average (40.4)

Blake helped lead Coastal Carolina back to the CBI in 2019, where the Chanticleers stunned West Virginia, 109-91, in a second-round game in Morgantown. The 109 points were the most ever scored by a West Virginia opponent in WVU Coliseum. In a season that had Sun Belt Freshman of the Year Devante Jones and stellar freshman guard Ebrima Dibba sidelined with injuries for most of the year, the one constant was the play of senior Zac Cutherbertson, a second team All-Sun Belt forward who averaged 18 points and 8 rebounds-per-game and became only the third Chanticleer ever to score 1,000 points in only two seasons.

Before arriving at Coastal, Blake was the head coach at Chipola College in the Florida panhandle from 2012 to 2015. In his time as head coach, he compiled an overall record of 62-30 and was named the 2013-14 Panhandle Conference and state coach of the year.

During the 2012-13 season, the Indians posted a 26-5 record and a second-place finish in the Panhandle Conference. Blake’s first recruiting class produced three Panhandle All-Conference selections and was comprised of five of the nation’s top-40 players, including the No. 1 and No. 4 ranked players overall.

In addition to his work on the court, Blake led the Indians to an improved performance in the classroom and in the community. The Indians posted a team GPA of greater than 3.0 and saw the largest turnout for Chipola’s Basketball Camp.

Blake served as an assistant at Chipola from 2010 to 2012. He was on staff when the Indians won the 2011 Panhandle Conference Championship.

Prior to Chipola, Blake was a graduate assistant under head coach Andy Kennedy at the University of Mississippi (2008 to 2010), helping guide the Rebels to the 2010 SEC Western Division title.

Blake graduated from the University of Louisville in June 2009 with a degree in business marketing. At Louisville, he was a student manager for head coach Rick Pitino for four years, serving as head manager the last two. He was with the team during the 2005 Final Four run and 2008 Elite Eight run.

Blake is a native of Evansville, Indiana.