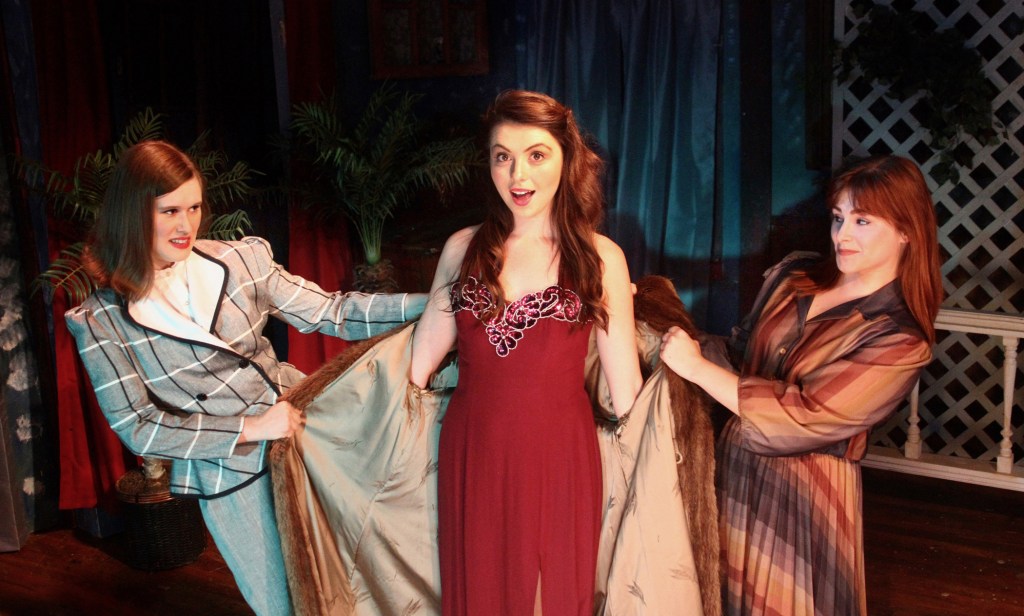 Pioneer Playhouse continues its 70th season under the stars with “Not Now, Darling,” a fast-paced comedy set in swinging 1960s London.

The plot of “Not Now Darling,” written by Ray Cooney and John Chapman, centers around a London shop that sells top-end fur coats. One of the owners of the shop, Gilbert Bodley (Drew Sutherland) plans to sell an expensive mink to London mobster Harry (Eric Hedlund), dirt cheap for his wife, Janie (Katherine Rose Reardon.)

Janie is actually Gilbert’s mistress, and he wants to “close the deal.”  But instead of doing his own dirty work, he gets his nerdy, reluctant partner, Arnold Crouch (Forrest Loeffler) to do it for him. Things start to go awry when Harry tries to buy the same mink at the same low price for his own mistress, Miss Lawson (Bailey Angel.)

“We’re going for ‘retro’ here,” says Heather Henson, managing director of Pioneer Playhouse. “It’s an old-fashioned farce with lots of door-slamming and mistaken identity. It’s something like the comedy ‘Boeing Boeing,’ which patrons absolutely loved when we did it a few years ago. Just a lot of running around and silly situations.”

“It takes you back to swinging London,” says Robby Henson, artistic director of the 70-year-old summer stock theater. “We always like doing plays with costumes from that era. It’s always stylized and over the top.”

“Lots of fur,” Heather Henson adds. “Since it’s about a salon that makes stylish fur coats.” She says of course, it isn’t “the most popular play” with their actors.

“We’re asking them to wear fur in the middle of summer. But the fun thing is, they’re constantly taking the fur on and off, so I guess you could say, the fur really flies in this one,” she says.

Directing “Not Now Darling” is longtime Pioneer Playhouse favorite, Daniel Hall Kuhn, who is often seen on stage rather than behind the scenes.

“Daniel is a terrific director,” Heather Henson says. “We thought he’d be great for this kind of crazy hijinks play, and then, of course, he’s staying on to star in our last show of the season, ‘Red, White and Tuna.’”

“Daniel has starred in our ‘Tuna’ shows before, and audiences just love him,” Robby Henson says. He’s referring to the plays written by Ed Howard, Joe Sears and Jason Williams, all centered around a group of folks from Tuna, Texas, the third smallest town in the Lonestar state. “Daniel and one other actor will be playing about 30 characters. Lots of quick costume changes,” Robby Henson says.

“Not Now Darling” opens July 23 and runs through August 3 at Pioneer Playhouse, 840 Stanford Road. Shows are 8:30 p.m. Tuesday-Saturday, with an optional home-cooked BBQ dinner served at 7:30 p.m. Reservations suggested for the play, required for dinner.

Shows are nightly, Tuesdays through Saturdays, at 8:30. An optional home-cooked dinner of BBQ pulled pork or chicken is available at 7:30 before the show. Cost is $35 for dinner and show, or $20 for show only. For tickets, call (859) 236-2747 or visit pioneerplayhouse.com.