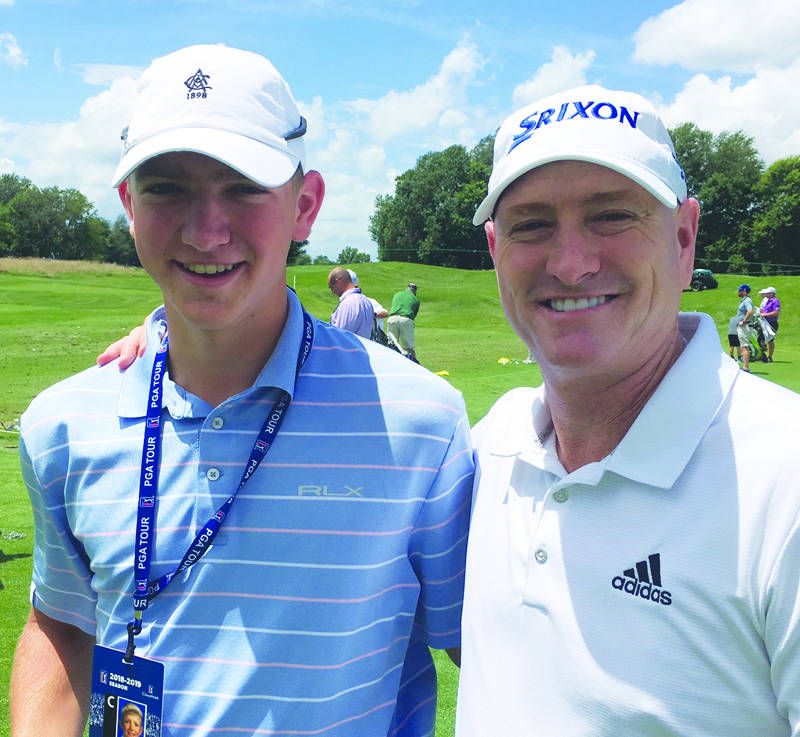 Steve Flesch (right) with son Griffin. Flesch is excited to return to the course where he first made his mark as a pro. (Photo submitted)

NICHOLASVILLE, – When Steve Flesch played in the 1989 Kentucky Open at Champions, the Arthur Hills-designed course was barely two years old.

Flesch was just 22 and competing in his last tournament as an amateur.

The former University of Kentucky golfer played well but lost in a five-hole playoff to Rob McNamara.

Two years later, Flesch returned to Champions as a pro and fired a course-record 62 in the opening round and went on to win the title.

That victory was a significant stepping-stone to a solid career on the PGA TOUR.

“If you want to play as a pro and make it,” he said at the time, “you have to beat everybody in your state.”

Flesch is back at his old proving grounds this week to play in the $3.5 million Barbasol Championship.

“Champions is always going to be a special place to me,” he said while standing on the practice green Tuesday afternoon.

Of course, a lot has changed over the last 30 years.

Flesch is now 52 and a card-carrying member of the Champions Tour. He’s won once on the senior circuit after winning four times on the PGA TOUR.

When he arrived at Champions (at Keene Trace) on Tuesday, Flesch was accompanied by his 20-year-old son Griffin, who occasionally caddies for him.

While Flesch is one of the oldest players in the Barbasol’s 132-player field, it wouldn’t be a surprise if he put up a fight against the younger guys.

“I expect to play well because I know the course, and it’s not ridiculously long,” he said.

“But I also know it’s not going to be easy. The PGA TOUR is cutthroat, man; it’s serious business, and these guys are long and they’re good.

“I hope the city comes out to see them because their talent level is unbelievable.”

Champions at Keene Trace has undergone some changes the last couple years, with several holes getting stretched to better challenge the long hitters.

Flesch got a look at the added length two weeks ago when he played here with longtime buddies Tim LeRoy and Billy Lewis.

“It does play differently,” Flesch said. “Before those changes I think the scores would have been really low. But they’ve maintained the integrity of the golf course and it’s in great shape. Hopefully the rain stays away this year.”

Flesch is thrilled that the PGA TOUR has found a home in Central Kentucky. He would’ve played in the inaugural Barbasol here last year but he couldn’t pass up the chance to compete in the Senior British Open at St. Andrews.

“I was sad to miss it last year but I’m glad it worked out this year,” he said. “To me, the biggest thing is we have another PGA TOUR event in Kentucky. It’s fantastic that we get the Ryder Cup and PGA Championship at Valhalla, but I think we were a little starved for golf in this state.

“Having a PGA TOUR event in Lexington is great, and it’s cool to be part of it.”