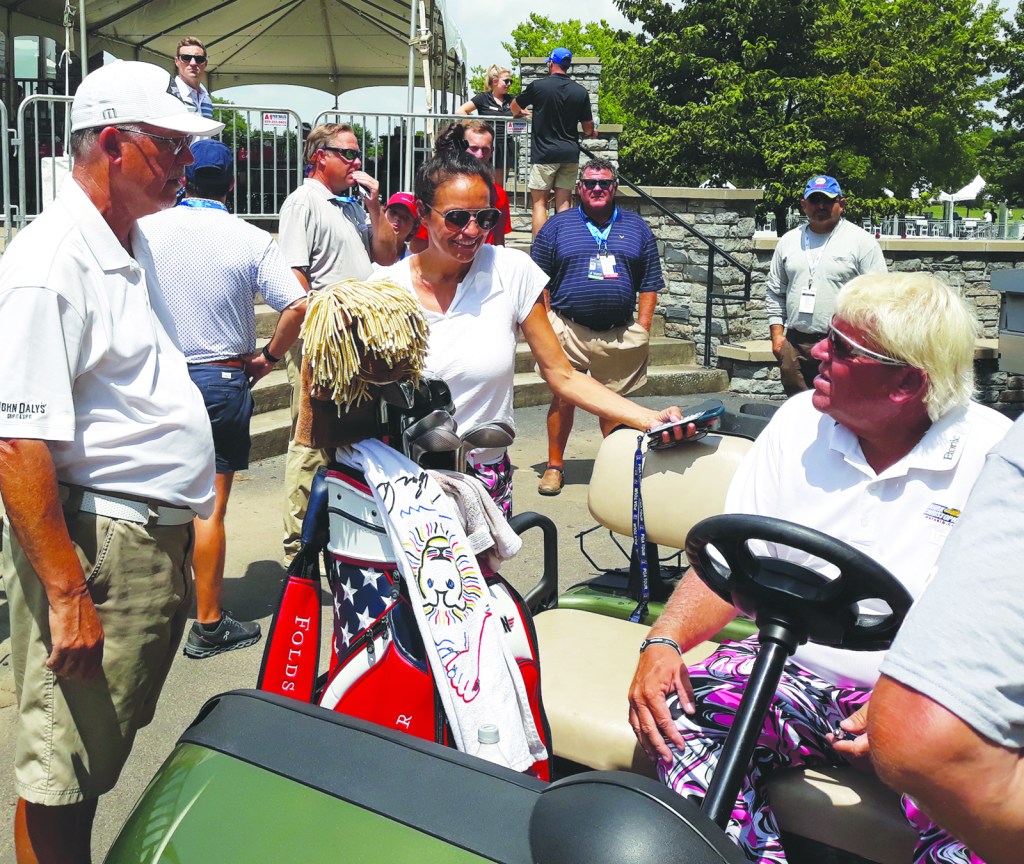 NICHOLASVILLE — John Daly’s up and down round included birdies, a triple bogey and a few short missed putts, but most fans at the Barbasol Championship at Keene Trace Golf in Jessamine County didn’t care.

They followed him despite the hot, humid weather and cheered loudly when he finished his 1-under par round of 71 that he’ll have to dramatically improve Friday if he hopes to make the 36-hole cut at the PGA Tour event.

His significant other, Anna Cladakis, watched every shot and as she traditionally does when she watches him play, her shorts matched the colorful pants that Daly wore.

“The fans love JD and I am going to tell you right now, it is just amazing how many people embraced him here considering it was his first time here I think too on this course,” said Cladakis while Daly did his media interview.

“I try to go to tournaments with him because I love it. I love meeting the fans and hearing the stories. Everybody has a little story with JD, so it’s cool and nice.”

She was actually in Boyle County with Daly Tuesday night at Old Bridge Golf Club. Daly is friends with country music singers Eddie and John Michael Montgomery and they got to together to tell stories and more. John Michael came to the course to watch part of his round before he had to head out of town Thursday.

“They are all buddies of JD’s and have been for many years,” Cladakis said. “We just went and hung out with them. They just happened to be in town and I know today they all left for shows.

“It was great to see them. They sung a few tunes, hung out at the golf course. It was very private and nice. They are an amazing talent. It was so much fun.”

Daly has released his own albums and provided backup vocals for Kid Rock.

“They were tuning, not with guitars. Just singing on their own a capella. They had a good time,” Cladakis said. “I loved it. We downloaded their songs and on the way home were singing them. It was awesome.”

The weather didn’t bother her or Daly, a two-time major champion, because she said it was similar to the heat and humidity in Florida where they live. She did think Wednesday night’s rain made the greens a little slower that impacted Daly’s putting a bit.

“But man the hospitality is amazing here,” she said. “Everybody is so great. It’s similar to John’s hometown (Dardanelle) in Arkansas. It’s just hard to believe the folks here are so hospitable and nice.”

Daly played in the Pro-Am with Kentucky football coach Mark Stoops Wednesday. They had dinner at Malone’s on Wednesday night.

“They have been texting and everything. Mark had to leave for a coach’s thing (SEC Media Days) but said he would be back Sunday and he hoped JD would win so they could celebrate,” Cladakis said. “We know we have to do better tomorrow and hopefully we can.”