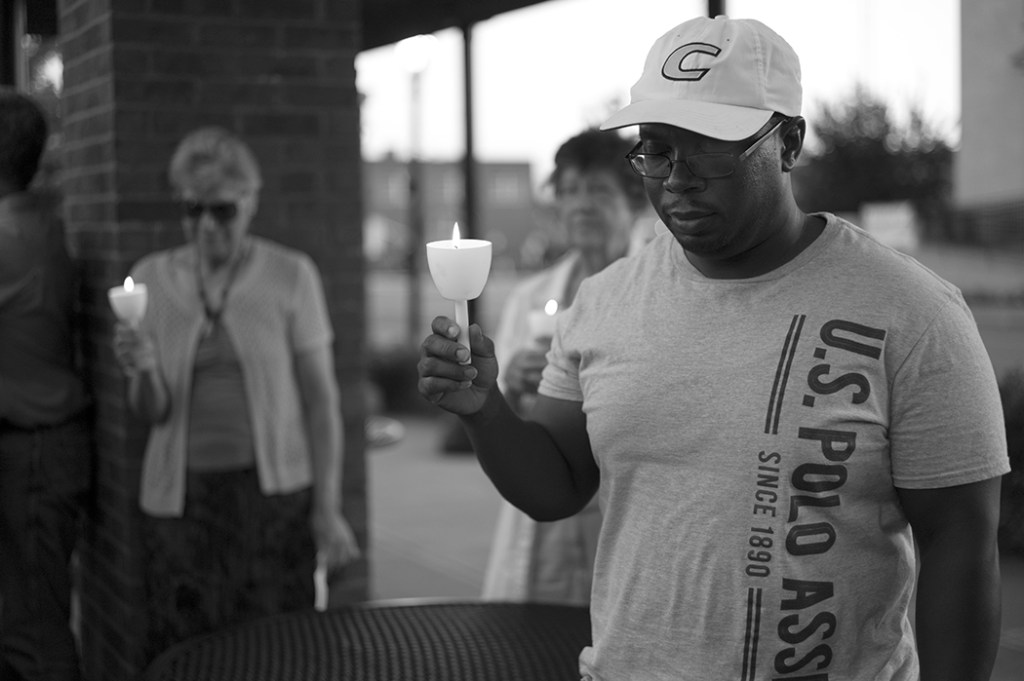 David Payne participates in the vigil during the moment of silence. (Photo by Nick Lacy)

On Friday, July 12, about 100 area residents gathered in Weisiger Park for the Lights for Liberty Vigil to End Human Detention Camps. The vigil was one of seven held in Kentucky and one of over 750 held worldwide. 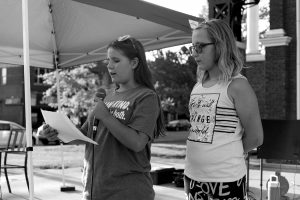 “The vigils are being held to shine a light on the inhumane conditions faced by migrants, the overcrowding and unsanitary conditions. Children are dying while in US custody, there is inadequate food and hygiene facilities, holding cells are crowded way beyond capacity,” said Vera Burris, one of the organizers of the Danville vigil.

Hank Linderman, 2018 candidate for U.S. House of Representatives, District 2, asked those assembled to bring pressure on elected officials, starting with the mayor and city commission, to pass a resolution opposing the detention policies of the government.

“I want to also gently suggest that the Danville City Commission draft and pass a resolution indicating where they stand on these issues, particularly regarding separation of families and holding them in pens. This is a moment when our morality matters, and all of us, especially our leaders, need to take a stand, one way or the other, a stand that acknowledges every aspect of the problem. You may think it won’t matter what the Danville City Commission has to say, but I disagree.”

Vigil co-sponsor Centro Latino representative Brady Swift shared the fear that immigrants living in and around Boyle County are feeling. “People that live, work and raise their children in this town have experienced and continue to feel the fear we see in images from the detention centers and the testimonials we hear tonight. When I ask, ‘Why did you choose Danville?’ The most common response is, ‘We feel safer here than in any other place. We want to build our family here. This is our home.’ Let’s make our neighborhoods, communities and country a place that anyone can call home.”

During the vigil, young people read the statements given by young people in detention centers, which stressed the pain of separation from parents and the need for children to care for other children. At the conclusion of the vigil, the names of the children and adults who have died in U.S. custody were read and candles lit before a moment of silence.

The vigil finished with the singing of “This Little Light of Mine.” Organizers believe that this will be the first of many efforts to close the camps and reunite families.

For more information, go to lightsforliberty.org.