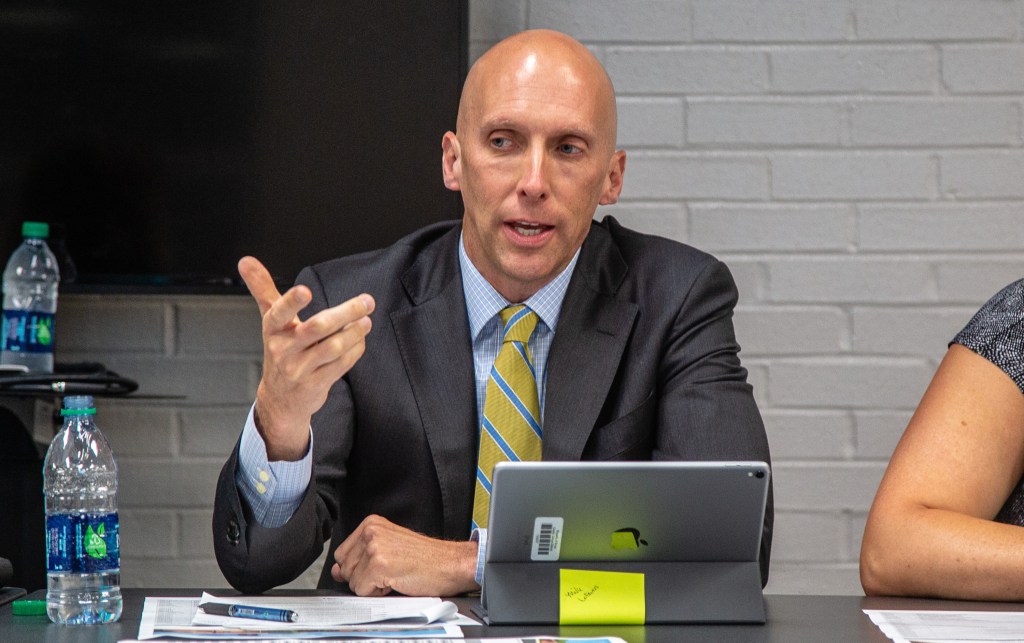 Boyle County Superintendent Mike LaFavers thanked the school board Thursday, after it voted 3-1 to give him a new contract that is likely to last until LaFavers is ready to retire. (Photo by Ben Kleppinger)

Superintendent Mike LaFavers will be staying put as the head of Boyle County Schools for four more years.

There was still time left on LaFavers existing contract, but the Boyle Board of Education voted 3-1 Thursday to give LaFavers a new contract that will keep him as the head of the school district through June 30, 2023 — and possibly to the end of his career.

“The board will have an option to renew the contract (in 2023), but he will also have that option to retire at 55,” board Chair Jennifer Newby said. “So it’s kind of a win-win for both sides. We get him for a guaranteed four years and then he can make that choice for what’s right for him and his family.”

Board member Ruth Ann Elliott voted against the new contract without comment during the board’s meeting Thursday night. After the meeting, Elliott said she voted no because there had been no meeting to discuss a new contract and she couldn’t support the increased cost.

“I can’t support over a $9,000 salary increase because the taxpayers are going to have to be paying,” she said. 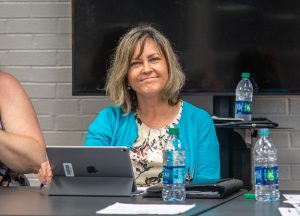 Newby said there was no substantial increase given in the new contract, but the board “rounded up to the next thousand” after including the standard step increase that educators receive each year they stay in the district.

“So there was no extra money given on the contract,” she said, explaining the board rounded up by an estimated $500 or $600 because “we didn’t want to decrease his position from where his step was.”

The new contract gives LaFavers a starting salary of $161,000 this year. “Also, the superintendent shall receive an increase … equal in percentage to that received by all other certified employees … each and every year he is employed,” the contract states.

According to the Kentucky Department of Education, LaFavers’ salary was $155,572 for the 2018-19 school year, which means his new salary represents an increase of about 3.48%. The year before that, the school board gave LaFavers a new contract that set his salary at $152,000.

The statewide average for superintendents’ salaries in 2018-19 was $129,889, according to KDE, but that figure doesn’t account for different levels of experience and longevity among superintendents.

LaFavers said he is entering his 11th year as Boyle County’s superintendent and his 27th in education. He taught for 11 years, worked as a principal for four years and then as a superintendent for one year prior to getting Boyle’s top position. He said he’s happy about the idea of finishing his career in the school district he considers home.

There were two years remaining on LaFavers old contract, but some of the major projects the school district is working on now will likely not be completed within that time frame, he said.

“I just feel like at the end of this contract … there will be some closure on all those things and it will be a good time to transition to the next person, whoever that is, and I think my work will be done.”

LaFavers said no one knows exactly what Kentucky’s retirement systems will look like four years from now, so he can’t say for sure that retirement will remain his plan, but he sees “a transition coming” for Boyle County.

“You never know, but I could see where the timing is going to be right at the end of this contract that the board just offered me.”

After the board approved the new contract, LaFavers said he’s been asked how he’s able to keep going as a superintendent for so long.

“The way you do it that long — and I don’t want to get emotional, but it’s great boards … this one in particular — the way you do business makes my job easy. And this team, the people … and our staff in the schools — we’ve got great staff. And we would all say that our kids are really inspirational to us. They make us want to go further.

“… I’ve been in a very fortunate situation.”