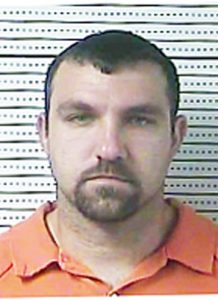 Zachary A. Vanderteems, 33, of Danville, was arrested and charged with failure to comply with sex offender registration and registered sex offender public playground restrictions, because of his residence’s proximity to Jackson Park.

On Friday at 6:20 a.m., Danville Police, along with Probation and Parole officers, responded to Ashford Drive to investigate the non-compliance of a registered sex offender. During the investigation ,officers determined Vanderteems was residing at an apartment on Ashford Drive.  According to the sex offender registry, Vanderteems has reported his residence as 120 Brookcove Drive in Danville.

As of Friday afternoon, Vanderteems was listed as an inmate in the Boyle County Detention Center with a $5,000 cash bond.