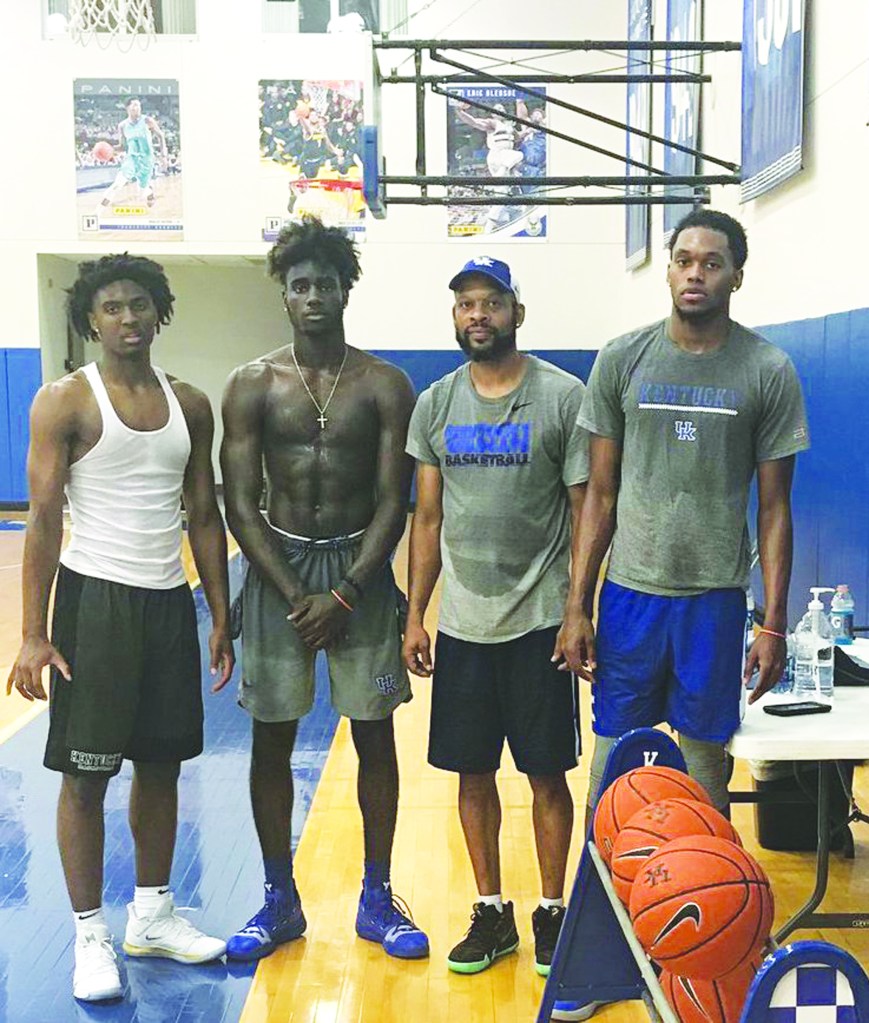 Keion Brooks Jr., right, won't seek the spotlight at UK but also will not be overwhelmed by it because more than anything, he just wants to win. With him are freshmen teammates Tyrese Maxey and Kahlil Whitney along with his father. (UK Athletics Photo)

Recruiting rankings have never been a huge topic of conversation for Keion Brooks Sr. and his son, Keion Brooks Jr., a Kentucky five-star freshman basketball player.

Brooks Jr. was ranked among the nation’s top 15 players in the 2019 recruiting class but some believe he could be even better playing for coach John Calipari than some suspect.

“I have never really thought about where people put him (in the rankings),” Brooks Sr. said. “We walk about the number in front of the game but what you do with the production behind it is what really matters. He can go out and be productive and show what he can do on the floor and it will speak for itself. A lot of times you can get caught up in rankings and kids will lose focus on what they need to do and can do.

“He just wants to win and understands the game is a team concept. It’s all about winning at the end and what have you done to help your team win and could you have done even more. He’s always been taught to make winning plays and that is not always scoring. He can be setting a screen or defending a key play. Just do whatever it takes to win is what he does.”

Brooks Sr. has seen Calipari “preach” that same philosophy to his players the last few years. The UK freshman’s father looks at numbers and has seen how Calipari’s players have balanced minutes and points per game.

“It’s not a one-man show. It’s a balanced attack. It’s who is in the right place to make plays at the right time,” Brooks Sr. said. “One of the things that really stood out to us with coach was all of the players getting a chance to eat and trust in their brothers. You do that, everybody succeeds and you play winning basketball. One thing I really enjoyed in conversations during recruiting was when coach talked about the game is not about shots but what you can do to help the team win.” 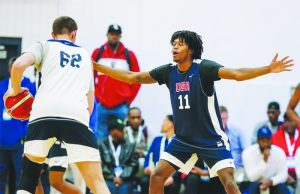 Keion Brooks Jr. is a versatile defender but he can also make “tough shots” to deflate defenses. (USA Basketball Photo)

Brooks Jr. has had a knack for making big shots at the biggest moments during his career. That’s also an attribute Calipari and his staff like.

“Keion has worked on shooting the ball from different spots on the floor from all kind of different angles,” the player’s father said.

“If he has a weakness, it might be that he sometimes sets the bar too high. He’s almost a basketball perfectionist who is never satisfied with what he has done.

“He wants to do things right no matter what it is,” Brooks’ father said. “He’s also wondering if this was the right play, right decision. He wants to be the guy you look at to make sure he’s doing it the right way. He holds himself to a high standard.

“Sometimes he feels he should have done more. He always wants it to be the right way. He doesn’t want to be in a situation where he did something (in a game) and then sees he should not have done it. If he can continue to have that mentality and really understand the game like that it will only help him grow more as a person and player.”

Could the spotlight at UK consume a player who sets such a high bar for himself because every move will be scrutinized by fans and media?

“He is a kid that will not look for the spotlight. However, he knows it will be there,” Brooks Sr. said.  “He is a kid that has had some experience on AAU and high school level with that. I do knot know that he understands the magnitude yet of what it will be like during the season. But it will never be about him. It will always be about the Big Blue Nation with him because more than anything, he wants to win.”