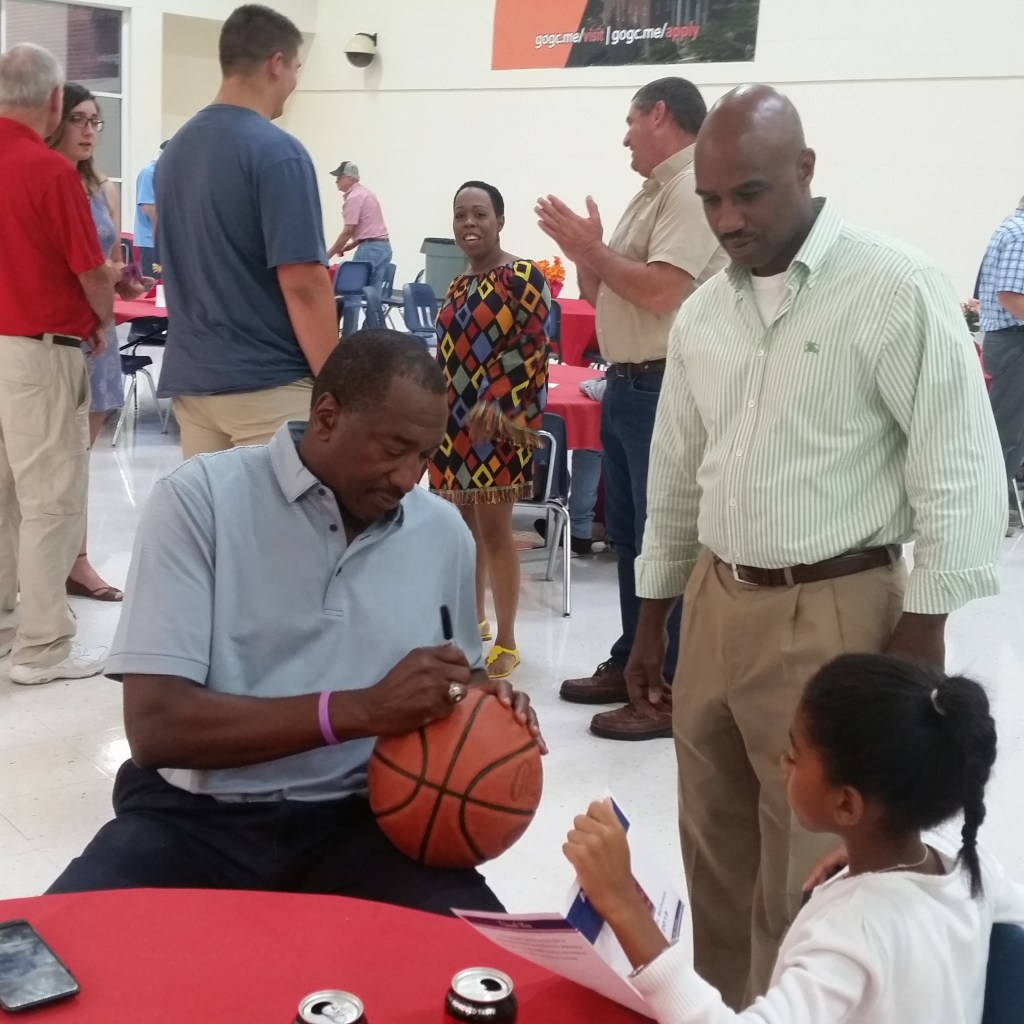 Twice during his freshman season at Kentucky, Jack Givens (shown signing autographs before a speaking engagement in Scott County) was content to let the team's seniors make the key plays. (Photo Larry Vaught)

Only twice during his four-year career at Kentucky was Jack Givens “mentally okay” just watching instead of needing to make key plays for the Wildcats.

Both games came during his 1974-75 season when UK reached the Final Four — and both came in the NCAA Tournament.

The first one was the Mideast Region final in Dayton, Ohio, against Indiana. The Hoosiers were ranked No. 1 and brought a 34-0 record into the game. Indiana also smacked UK 98-74 on Dec. 7, 1974, in Bloomington in the game where Indiana coach Bobby Knight smacked UK coach Joe Hall on the back of the head.

“He hit him with forearms, he hit him in the neck. He beat on Rick so badly,” Givens said. “They were beating us pretty badly. I was guarding Scott May in that game. I took a defensive rebound and I thought I am going to the hole.

“I don’t know where Scott May came from but he blocked my shot and it came down about half court. Quinn Buckner picks it up and Kent Benson flushes (dunks) it. Scott May looks over at me and said, ‘Boy, don’t you bring that weak stuff in here.’ My heart just dropped to the floor. That’s how it was.”

Kentucky seniors Jimmy Dan Conner, Mike Flynn,  Kevin Grevey and Bob Guyette didn’t forget when UK got a rematch in the NCAA — and won 92-90. Givens had 8 points on 4-for-7 shooting in 29 minutes along with six rebounds. Flynn had 22 points, Grevey 17 and Conner 17. Robey and freshman Mike Phillips both added 10 points.

“Our seniors were so into that game. I said, ‘Man you all go on. I will just sit back and watch.’ That game, even with us winning the (1978 national) championship, might have been the best game I was ever part of.”

The other game Givens gladly played a secondary role was the 1975 national title game against UCLA. The Bruins won 92-85 in legendary coach John Wooden’s final game even though Grevey had 34 points for UK. Givens played 25 minutes but was just 3-for-10 from the field and finished with 8 points.

“When we got to that final game, I told the seniors, ‘This is your game.’ Indiana should have been the championship game, not UCLA,” Givens said. “I was okay to sit back and just watch that UCLA game because I knew what it meant to our seniors. It also had a big influence on us (UK’s freshmen) three years later when we got to the title game because we didn’t want to have that losing feeling again in a title game.”