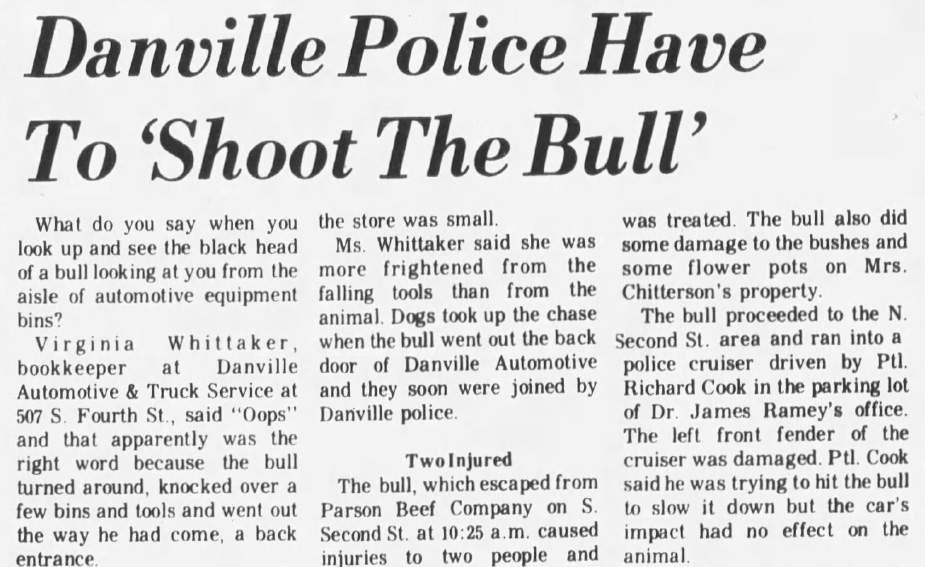 You’ve heard of something being as reckless as a bull in a china shop. If you read The Advocate-Messenger 43 years ago today, you would have understood a slightly different turn of phrase: As chaotic as a bull in downtown Danville.

In a story cleverly headlined “Danville Police Have To ‘Shoot The Bull,’” the paper recounted a 30-minute rampage by an escaped bovine culprit, which began with the animal’s unexpected arrival inside an auto parts store.

“What do you say when you look up and see the black head of a bull looking at you from the aisle of automotive equipment bins?” the un-bylined story began provocatively. “Virginia Whittaker, bookkeeper at Danville Automotive & Truck Service at 507 S. Fourth St., said, ‘Oops’ and that apparently was the right word, because the bull turned around, knocked over a few bins and tools and went out the way he had come, a back entrance.”

From there, the bull was apparently chased down the street by some dogs before Danville police arrived and began trying to corral the beast.

“The bull, which escaped from Parson Beef company on S. Second St. at 10:25 a.m. caused injuries to two people and damage to a yard and two police cruisers before it met its end on W. Lexington Ave. at 10:55 a.m.,” according to the story.

Lois Chitterson, then 72, was knocked down into some bushes by the bull; she had to be treated at Ephraim McDowell Memorial Hospital.

Danville Patrolman Richard Cook attempted to ram the bull with his police cruiser. But while the cruiser’s front fender was damaged, “the car’s impact has no effect on the animal.”

Patrolman Tommy Dunsmore’s cruiser also took damage when he maneuvered it in between the bull and a woman who “was carrying a small baby and another small child was with her” on North Second Street.

Finally, Joe Craig, then 57, was injured when he had to run up against a police cruiser to avoid being run over by the bull. His right arm was pinned to the door; he was treated and released at the hospital.

After the bull had been shot and the crisis ended, Police Chief Everett Kidd “laughingly said Danville had its own bull festival here … and that he was going to make a bull fighter out of one of the police officers,” according to the story. “But he added, in a serious vein, that the incident could have caused serious injuries to persons.”

• Boyle County Schools approved a $1 million plan to build a new elementary school on its grounds by Perryville Road and the Danville bypass. “The portion to be built this year will contain 10 rooms, plus a work area, toilets and a basement that will be used for play and for eating lunch.”

• An Associated Press story datelined Washington, D.C., told about outrage from some farmers over a “privy-on-the-prairie proposal that would require them to provide toilets, washing facilities and drinking water within a five-minute walk of all field workers.”

Giving away the newspaper’s editorial position on the matter, the story was given the kicker headline, “What Else From The Idiots?”