Progress being made on new Boyle Middle School 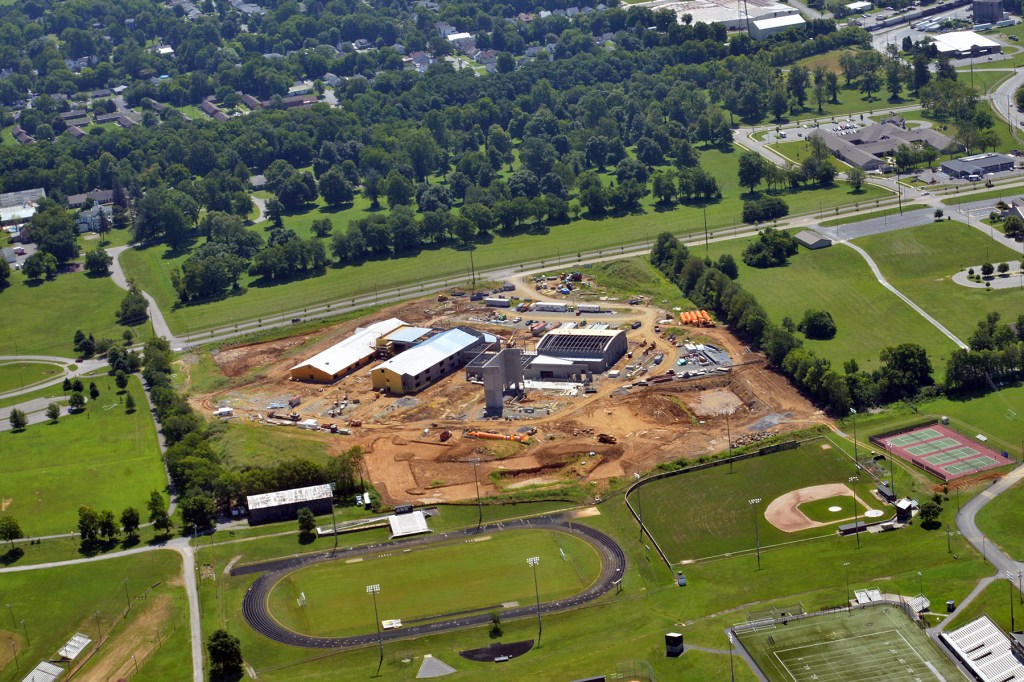 The construction of the new Boyle County Middle School is easily spotted from 1,200 feet above ground. It was one of many locations pilots pointed out to their young passengers. (Photo by Robin Hart)

Work is continuing on the new Boyle County Middle School building, but progress has been slower than school district leaders may have hoped. 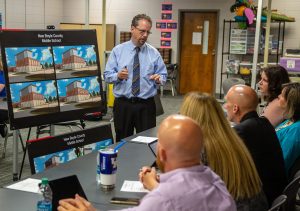 Tony Thomas with Clotfelter Samokar goes over possibilities for exterior design features on the new Boyle County Middle School theater building with members of the Boyle County Board of Education Thursday. (Photo by Ben Kleppinger)

“We’re getting close to finishing now in some of the areas that are dried in,” architect Tony Thomas told board members last week. “Of course, the theater’s not near that, but that’s the lowest priority at this point. The areas that are the highest priority have really seen a lot of progress.”

On Thursday night, the board gave Thomas, who works for the design firm Clotfelter Samokar, its opinions on design elements for the outside of the theater, which is planned to seat more than 500 and will feature an orchestra pit and fly loft for large productions.

Board members favored reflective metal panels with angled lines along one wall of the exterior. And they asked Thomas to study whether using a decorative glass panel at the top rear side of the fly loft wall would cause sunlight to reflect in a problematic way for the nearby baseball field.

Thomas said exterior brick is being laid around the building’s insulated walls now. The gymnasium, which is expected to be able to accommodate 900, is now closed in, he said.

There are “still some struggles” with progress, Thomas said. “We’d like to see it further along than we do. As soon as we get a little progress going, then we seem to get 2 inches of rain in two days. But it is moving along.”

Clotfelter Samokar representatives have been keeping the board apprised of progress on the more-than-$30 million project at every board meeting. They regularly praise the high quality of the work being done by general contractor Branscum – W. Rogers LLC, while also noting the speed of construction has been less than ideal.

In June, Clotfelter representative Mike Etapa told board members that part of the problem is that the construction industry “has taken off” and construction workers are in high demand. That makes it harder for the contractor to find available workers for its projects.

“We do feel for that, but again, we’re still pushing on them to get more masons on jobs … we’re still going to push on them because I’d rather have them on our site than on someone else’s job.”

At the June meeting, Etapa also told board members the contractor was hiring a second superintendent to speed up the work. Last week, Thomas said there had been “a lot of progress in just the last couple weeks.”

The school district currently expects the school to be complete this winter, according to Jacquie Peterson, media spokesperson for Boyle County Schools.

The building could be complete “just after the first of the year,” Peterson said Monday. “But we don’t have a firm date yet.”

When the district broke ground in January 2018, officials had hoped the building could be completed in time for the beginning of the 2019-20 school year. 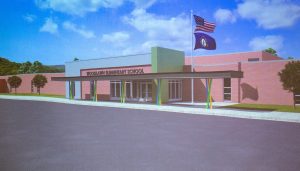 A rendering shows one possible design for the front of the new Woodlawn Elementary School, which will be inside the current Boyle County Middle School building. (Image by Clotfelter Samokar)

A complementary project to the new middle school is renovation of the existing middle-school building to serve as the new home for Woodlawn Elementary School.

Thomas told board members Thursday the estimated price for that renovation has gone up by more than $400,000. The base bid price — what the general contractor will be paid before any alternate plans or fees for architects — was estimated at $2.63 million last November. On Thursday, the board approved a new document for the state that ups the estimated base bid cost to $3.06 million. The total price after additional costs is estimated at $3.5 million. If the board opts for all of the “alternates,” which are optional improvements or upgrades, the price tag could be $4.27 million.

According to Finance Officer David Morris, the district’s current bonding capacity is $3.9 million, meaning the district can afford to sell bonds to cover up to that much of the Woodlawn project cost.

Thomas said Clotfelter Samokar is attempting to speed up the process so the district can bid the project in November, which would then allow the district to sell bonds in January. Morris said November is a good time to accept bids for the project, while January has a better “climate” for low-interest bonds.

Superintendent Mike LaFavers said as long as the bids come in at the estimated level or below, the district should be in really good shape to proceed. If the base bid comes in higher at $3.8 million or $3.9 million, for example, then board members might have 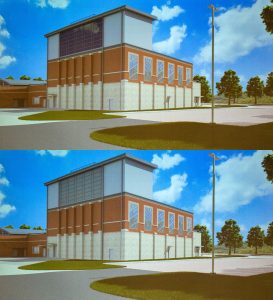 Clotfelter Samokar
Boyle County Board of Education members selected this look for the exterior of the theater in the new middle-school building during their meeting Thursday. The design features reflective metal panels on the side and, depending on whether the reflectivity would affect the nearby baseball field, either a metal or a glass panel at the top back side of the building. The panels would all be decorative pieces on the outside of the structure; none of them would let light inside the theater. (Image by Clotfelter Samokar)

to take a hard look at some of the alternates they hope to include.

A worst case scenario, LaFavers said, would be if the district has to put in additional funds from the general fund to cover the renovation, which would delay planned improvements to the nearby track and field facility.

Thomas also presented the board with a rendering of how the front of the new Woodlawn Elementary might look, based on a request from the school district to show an idea for “sprucing up the front of the building.”

The rendering features new brickwork and an awning held up by colorful, pencil-like tubes.

In other business, the board voted unanimously to approve the district’s new meal prices, as recommended and discussed in June.

The prices will not change at Woodlawn Elementary School. All students will continue eating for free at Junction City and Perryville elementary schools, thanks to a federal program that covers a substantial portion of the costs for high-poverty areas.