Coaches for local teams discuss their goals for the season 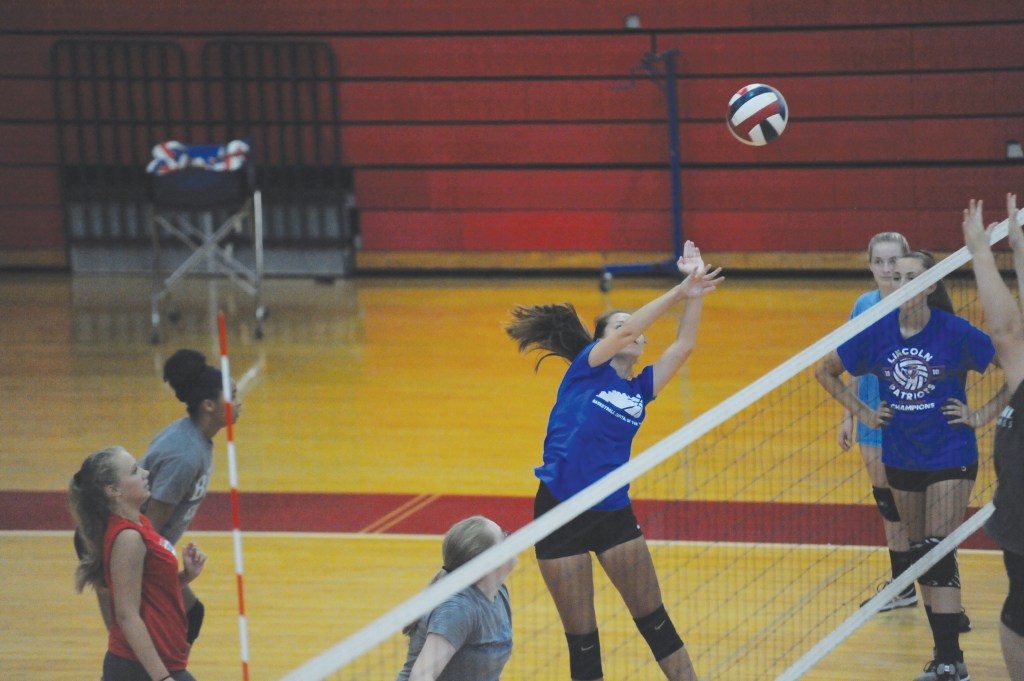 A Lady Patriot of the Lincoln County High School volleyball team leaps up to return a serve during a previous practice. (Photo by Derek Brightwell)

The 2019 volleyball season in the area should be an exciting one. Every team will be mixing a strong returning core with talented incoming players either making their varsity debuts or stepping into an expanded role from last season. Lincoln County, led by most tenured coach in the area Samantha Torres, looks to repeat as 45th District Champions. Casey County coach Victor Black hopes to continue the improvements shown from his first year with the Lady Rebels, while Burgin’s Rick Stewart hopes to turn the program’s fortunes around in his second year. Garrard County’s Hannah Johnson hopes that she can turn the Lady Lions around in her first season.

While every team has its own personal goals, the goals for every team remain the same: winning the district, region, and state titles.

Team goals: Team unity, on and off the court, seeing humbleness and integrity in players

Expectations for 2019: Overall eager to see how this team grows and challenges themselves to be better as players, a team, and most importantly people

Team goal: “Our motto this year will be DESIRE > IDEA.  Everyone loves the idea of doing everything well, but if we don’t apply the work then we don’t grow, or get better.”

Expectations for 2019: “This season will be all about keeping our motor running throughout the game. In all aspects playing team volleyball. Last year we had 16 girls play. Of those girls only 4 had played before.”

Strengths: “Experience and a desire to play hard. Some of these girls have played since 5th grade. They hustle and have the bruises to prove it.”

Team goals: “We’d like to get to double digits in the win column, defend our gold division title at the McCreary Central Invitational, improve our defense with our passing, and be positive as a team and as individuals. We see so many teams bicker and fuss at each other. We want our girls and team to be encouraging. It makes the game more fun to play.”

Expectations for 2019: Key departures from last seasons team combined with new contributors could lead to a tough start to the year. “Throw in a very good schedule as far as competition goes, in some ways it’s tougher than last season. So when you add all that up it’s gonna be hard to top last year in 2019. But what’s fun as a coach is to take a team and develop them into competitors and watch them battle and grow from the experience. We’re a team that’s growing.” 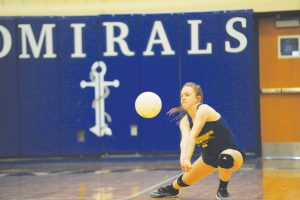 A Lady Admiral of Danville High School’s vollyeball team squats to return a serve during a previous practice. (Photo by Derek Brightwell)

New impact players: Large group, still needing to figure out where they slot in.

Strengths: Variety and level of difficulty of the offense. Incorporating a lot of different sets and plays. Big at the net.

Team goal: “Proving that we are a contender in the 45th.” Class A Regional Tournament. Exit the gym after every game and practice as better players than they went in.

Expectations in 2019: “I expect a lot from this team and they know that.”

Returning core: “We have some strong varsity players returning this year, and several returning that are now seniors.”

New impact players: “We have some very talented Freshman this year that I was able to coach last year as middle schoolers.”

Strengths: Strong playing abilities in several positions, and our communication as a team is improving significantly with each practice.

Weaknesses: Adapting to a new coach and new system.

Team goals: Our top goal this year is gaining confidence on the floor. 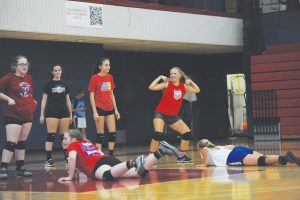 Expectations in 2019: Repeat as district champions.

Strengths: Team chemistry. All very solid with their skills. Very supportive of each other. Playing together since middle school.

Weaknesses: Too hard on themselves.

Team goals: More girls make all-region team. Play through mistakes, don’t let it take them out of the game. More communication on the court.

Expectations for 2019: “Winning 80 percent of our games, I think, is a realistic goal.” Compete in a tough 46th District.