Danville talking with design firm about solutions for Weisiger fountain 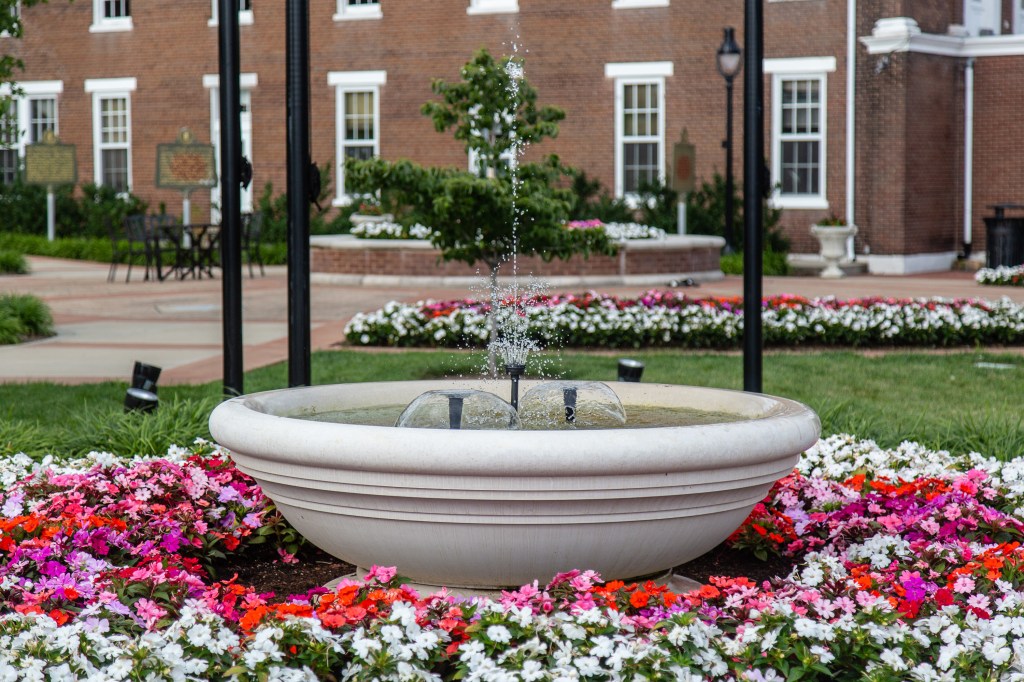 The fountain in Weisiger Park was criticized by Mayor Mike Perros as being an "expensive ice-maker" and a "glorified planter." (Photo by Ben Kleppinger)

City Manager Ron Scott said the city has heard the expressed desires of improvements needed on the Weisiger Park fountain. Many have commented to the city commission that the water fountain’s effect is underwhelming.

Monday, Scott said Municipal Utility Engineer Earl Coffey, who was not present at the meeting due to being on vacation, had a meeting with Monica Sumner with Brandstetter Carroll, the firm that designed the fountain, and said options are being reviewed to make a recommendation.

“My understanding is that they are considering the firm’s response,” but there were no further updates, Scott said. “But we are pursuing the topic.”

The fountain was installed in 2017, following delays and revised completion dates. The fountain is one of the main features in the newly renovated Weisiger Park. The park renovation cost $594,000, according to the official announcement when the park was dedicated.

During a June 27 meeting, Scott told the commission he was made aware of a local petition signed by about 15 citizens who have raised money in an effort to get the fountain replaced. The group wants a bronze fountain that’s been for sale in Lexington for years, featuring water “flowing out of necks of swans,” Scott previously said.

The price of the swan fountain is $6,000, with a total cost that included installation running up to $30,000. The city is considering finding a new home for the existing fountain, possibly at the water treatment plant.

Scott previously said the fountain was actually considered by the city commission when it was first planning renovations at the park.  “We’ve had difficulties — it’s no secret to anyone that our existing fountain I would say is not optimal,” he said in June.

During that meeting, Mayor Mike Perros likened the fountain to a “glorified planter” with its current malfunctions. “It will never be a workable fountain to where water can come in and circulate and go out and back in.” He feels the city got something which never worked right from the beginning, and City Attorney Stephen Dexter agreed, adding Brandstetter Carroll has a liability of making the fountain right.

Scott had been made aware of the petition by local business owner and Beautification Committee member Janet Hamner, and told that the group had raised $2,200.

Tuesday, Scott said, “The person circulating the petition did not present it to me as city manager or to the city commission, but instead noted the total number of names, and did not present the money collected.”

Scott said he is under the impression the money collected will be refunded, because perhaps the “major goal was achieved by the petition — to demonstrate that there is a community desire to improve on the existing fountain, and leaving that issue with the city/staff to solve.”

In other parks-related business, Scott was pleased to announce that a “personal sanitation device” — a porta-potty — has been installed at the Lexington Avenue park, located at the Coldiron-Watkins Memorial Water Treatment Plant. Resident Ben Knowles appeared before the commission previously in June with a humorous plea for a restroom facility at the site.

Knowles said residents are extremely happy the park is there and it’s been great for day trips. But, like many other parents he said he loads the car up with a group of kids to take to the park, but once they get there “someone’s always got to go.” He said they’ve been resorting to “going behind” one of the bigger trees in the area.

Monday, Scott said the city plans to keep the porta-potty on site, paying $125 a month to rent it during peak months of outside play time.

“Also in that area, the engineering and Public Works departments are to be commended,” Scott said, due to their continual work in very high temperatures “to complete the required forming to pour concrete.”

He said they hope to have the Lexington Avenue park in full operation, including the splash pad, around mid-August. Scott said he realizes this is late in the season, but residents will still get some enjoyment out of it this year.