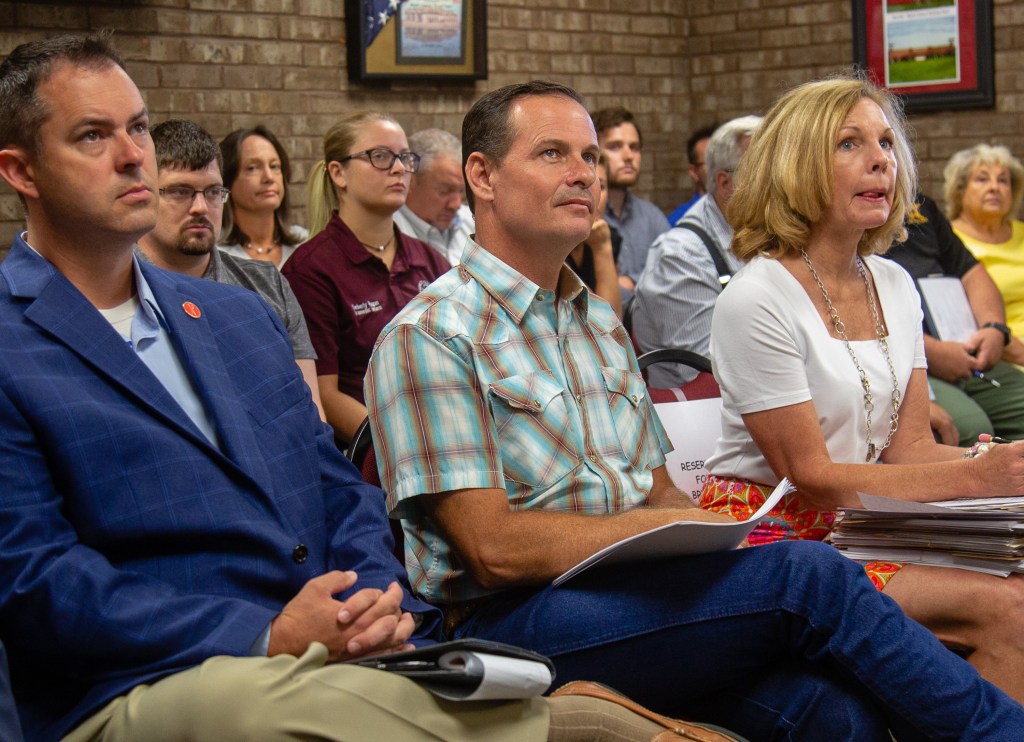 Martin Smith, center, attends Tuesday's Boyle County Fiscal Court meeting. The court approved a resolution supporting Smith's plan for a hemp processing business in Danville; it will serve as the applicant for a federal Community Development Block Grant that could be used to provide Smith with a low-interest loan. (Photo by Ben Kleppinger)

International Farmaceutical Extracts is seeking a loan through the federal Community Development Block Grant program to help make its $6 million hemp-processing business a reality in Danville.

If the funding is secured, the money awarded could eventually be reinvested in other economic development work in Boyle County, according to Economic Development Partnership President Jody Lassiter.

That’s because Boyle County would be awarded a grant from the federal government. That money would then be loaned to International Farmaceutical Extracts, which would pay it back with interest over time, Lassiter said.

The repaid money would then be kept to “expend … for future economic development projects with the approval of the Kentucky Department for Local Government,” according to an email from Lassiter.

The “target” amount for the CDBG is $500,000, Lassiter said Tuesday afternoon.

The Boyle County Fiscal Court voted unanimously Tuesday morning to serve as the applicant for the CDBG funding. The Bluegrass Area Development District will assist with “preparation, planning, submission and administration” of the grant, in exchange for $35,000 of the grant award, according to the court’s resolution.

The EDP would be a “sub-recipient” of the grant and the actual agency that loans the money to International Farmaceutical. Interest would be “at a minimum 2%” but “we can set a slightly higher rate if we so choose,” according to the email from Lassiter. “Typical loan term is 3-5 years, and no more than 10 years.”

Lassiter noted a condition of the CDBG is that at least 51 percent of the 34 employees the company expects to hire would be from low- or moderate-income families.

Lassiter said Martin Smith, owner of International Farmaceutical, is the first person in 12 years in Boyle County to “pull the trigger” on pursuing a CDBG project.

“Not only is he creating an economic opportunity for 34 jobs and an estimated $6 million investment, these portion of dollars … will be recaptured locally — not paid back but recaptured locally,” Lassiter said. “… A lot of our competitor communities have utilized CDBGs for a variety of purposes, such as acquisition of land, improvements of industrial parks, other industrial projects … this is a real opportunity for this project to give back to the community.”

Smith told fiscal court members he is a military veteran who has suffered from PTSD amnesia, and he has found relief from using cannabidiol (CBD), an active ingredient found in hemp plants. His plans for International Farmaceutical involve building two processing facilities in Danville that would be capable of producing enough CBD extract to serve mass-producers making products to be sold in nationwide chains.

At full capacity, the processing facilities may be able to produce 5,000 pounds of CBD oil from 50,000 pounds of industrial hemp flower pellets every day, requiring as much hemp as could be grown on 15,000 acres.

Smith said he plans for IFE to have an employee stock ownership plan, meaning over time, ownership of the company would transition to the farmers growing the hemp.

“You won’t ever have to worry about us leaving Danville, Kentucky. We’re going to be here continuously because of our ownership model, which allows our roots to stay here,” Smith told magistrates Tuesday. “… One of the reasons why we’re here is not only because you have such great history, not only do you have a great economic development team and the ability to move quickly because you’ve got a great unity about your community — the other reason we’re here is because you’ve got great farmers.”

Smith said it’s useful to think about “CBD and nicotine in the same way” because both can be extracted from crops and put into products. In the case of CBD, he wants to mass produce it with the hope it can help people like him — veterans with lasting health effects from war — cope with their pain.

Smith said many of those veterans are killing themselves because of the pain. “Our mission was always to utilize and open the doors for compassion on the potential for us to use this product.”

Magistrates were universally appreciative of Smith’s business plan and the CDBG plan. Magistrate John Caywood, himself a military veteran, thanked Smith for bringing up the issue of veteran suicides.

“I appreciate you are addressing this issue, because it’s an issue that many folks do not know is out there,” Caywood said. “… Thousands die every year.”