During the Southeastern Conference Football Media Days last week, the NCAA transfer portal and granting waivers to college athletes so they could play immediately without having to sit out a year was a popular topic among SEC coaches.

Alabama coach Nick Saban made it clear he was against the NCAA granting so many waivers. Not surprisingly, Kentucky coach Mark Stoops was asked for his opinion about waivers — a timely subject considering UK is hoping Florida State linebacker Xavier Peters of Ohio will get a waiver so he can play this season at Kentucky. 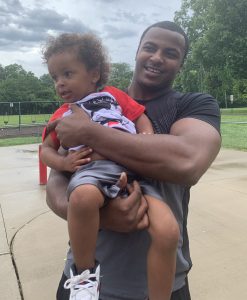 Linebacker Xavier Peters hopes the NCAA will grant him a waiver so he can play at UK this year after transferring from Florida State to be close to his son in Ohio. (Photo by Larry Vaught)

“I think it is difficult because, as I said, there’s a lot of good reasons. When kids need to transfer, there’s very good, solid reasons for that to happen. I think the human side of myself and everybody understands that and wants to support that,” Stoops said. “You want to be human. You want to help kids. That’s what we’re here for. That’s why we’re in this business.”

Stoops acknowledged the need to hold athletes accountable and knows players sometimes just want to transfer to avoid competition. However, he also knows there are exceptions like Peters, who wants to be closer to his infant son in Ohio.

“There’s the other side of it, the human side, where they need to transfer,” Stoops said before noting he had a player — Eli Brown — who needed to transfer to be closer to family again in Bowling Green that he “wholeheartedly supported.”

Peters was a Kentucky verbal commitment before deciding just before signing day to go to Florida State.

“I think what happened was he was committed to us all the way through and then he went to that Under Armour Game with (former NFL star) Deion Sanders and some other celebrity guys coaching teams and he got caught up in the (Florida State) hype a little bit. I still wished him the best because he is a great kid and now he wants to do the right thing and get closer to home,” Kentucky recruiting coordinator Vince Marrow said.

Peters played in just two games as a true freshman at Florida State before deciding to transfer so he could spend more time with his son.

“He was really missing his kid and wanted to get closer to home,” Marrow said.

Marrow admits some athletes have received waivers for immediate eligibility that puzzled him.

“His son’s birthday fell during the season and he said he would not see him even on birthdays until he was 4 or 5 years old if he was at Florida State and would not be able to celebrate that with him. He missed being part of that. This is something where you do the right thing for a young man who wants to be with his kid. Whether he went here, Cincinnati, Ohio State, he just wanted to get back to his son and do the right thing.”

“When we were recruiting him, we thought he would come in and play some as a true freshman and eventually take over for Josh Allen,” Marrow said.

That’s the Josh Allen who was a top 10 pick in the NFL draft after he was the consensus national defensive player of the year in 2018 when UK went 10-3 and won the Citrus Bowl.

“His physical capabilities are way better than what Josh’s were coming out of high school,” Marrow said. “That’s not saying a lot because Josh was only 205 pounds. Xavier was like 230 or 235. Very explosive, very strong. He still has to get out there and play but just from what you see, all the measurements are there for him to be a great player for us in the Southeastern Conference just like Josh was.

“But this is about a lot more than just what kind of player he is. This waiver is about doing what is right for a young man and his family and I just have to believe the NCAA will see that.”