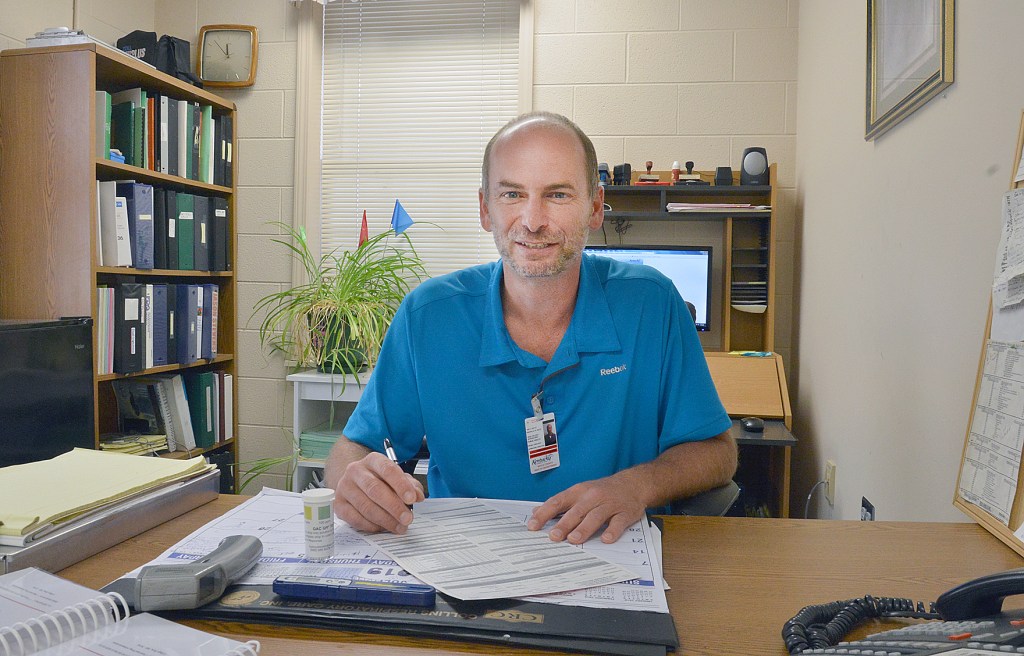 The Boyle County Health Department provides more than just physicals and vaccinations. The two environmental specialists there work continuously to keep the public safe and healthy.

Executive Director Brent Blevins said, “These guys do a ton of work and most people in town don’t pay any attention to them, until something happens.” 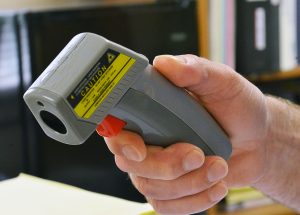 A hand-held commercial thermometer that meastures surface temperatures of refrigerators and freezers is just one of the tools Jason Stevens uses when inspecting food service locations. (Photo by Robin Hart)

“It’s so many different programs. … They think the health department is shots and that type of stuff. But they don’t realize what goes on with the environmentalists. It’s a very, very interesting job,” said Environmental Supervisor Jason Stevens, RS.

Stevens is a registered sanitarian and has worked at the health department for 21 years. He manages and conducts inspections for the department’s 17 state-mandated programs for Boyle County. His co-worker is health environmentalist Brittny Elkins.

He said the most time-consuming projects are septic systems. Every new home or building construction project in the county that is not hooked up to the city’s sewer system must have its septic system approved by a health department environmentalist, which takes several trips to the construction site. He conducts site evaluations, measures soil depth and characteristics, approves the layout of the system, checks on restrictions, meets with the property owners and licensed septic installers several times and gives the final approval of the system once it’s installed.

Or he may have to tell a property owner that their lot isn’t suitable for a septic system. They can’t build their dream home at that location or will have to spend thousands of dollars more and wait at least a year to put one in, Stevens said.

At the hotels, he inspects kitchens and breakfast serving areas twice a year; rooms once a year; and pools every 30 days.

“We’re always looking at doors, walls and ceilings,” for general sanitary and safety aspects, such as mold in the showers, working fire alarms and locks, tripping hazards — “and bedbugs, that’s the big dreaded one,” Stevens said.

“We try to get a snapshot of what they’re doing. Sometimes they may be having a bad day,” Stevens said. “They could have a new employee that accidentally set a drink cup where it’s not supposed to be, or by the sink, a chemical bottle where it’s not supposed to be. You can get a bad score pretty quick. But I try to look at the last two or three inspections and look for a pattern. Then they may need some help.”

He said, “They know we’re all on the same page. We’re here to make sure nobody gets sick. That’s our whole goal. … Our job is not to cause anybody undue hardship or trouble. It’s to try and help people.”

Jason Stevens always has a hand auger loaded in his vehicle, which he frequently uses when testing soil conditions for a septic system. (Photo by Robin Hart)

This year, in addition to the food inspections, Stevens will be conducting food manager courses now mandated by the state. “I could send them to Fayette County or somewhere, but I think it’s only fair if we’re going to require this, that we offer something here local for them to come to.”

Stevens said he likes everything about his job.

“I guess the best thing is we’re not just stuck doing one particular thing every day in and out. It’s a variety of stuff.”

One minute he may be at a site evaluation, then the next he’s going to inspect a swimming pool. Then he could be called by the hospital or urgent treatment center reporting an animal bite. “Any time anybody gets bit by an animal, the hospital is required … to report it to the health department,” due to the possibility of it having rabies, Stevens said.

Dogs, cats, raccoons and bats are rabies carriers, he explained. Sometimes a person who’s been camping or sleeping with their window open may wake up and find a bat inside with them. He said their teeth are so sharp that someone may think they’d been bitten by a mosquito, when in reality it was the bat.

“If they can’t get the bat to get it tested, we refer them to a physician to start rabies shots.”

Stevens said he doesn’t always get to go home on time because he tries to accomplish as much as possible for everyone who needs services.

“We’re here to help people. … I’d rather go ahead and deal with it right now because tomorrow is going to have its own problems.”