Danville chooses firm to find its next city manager 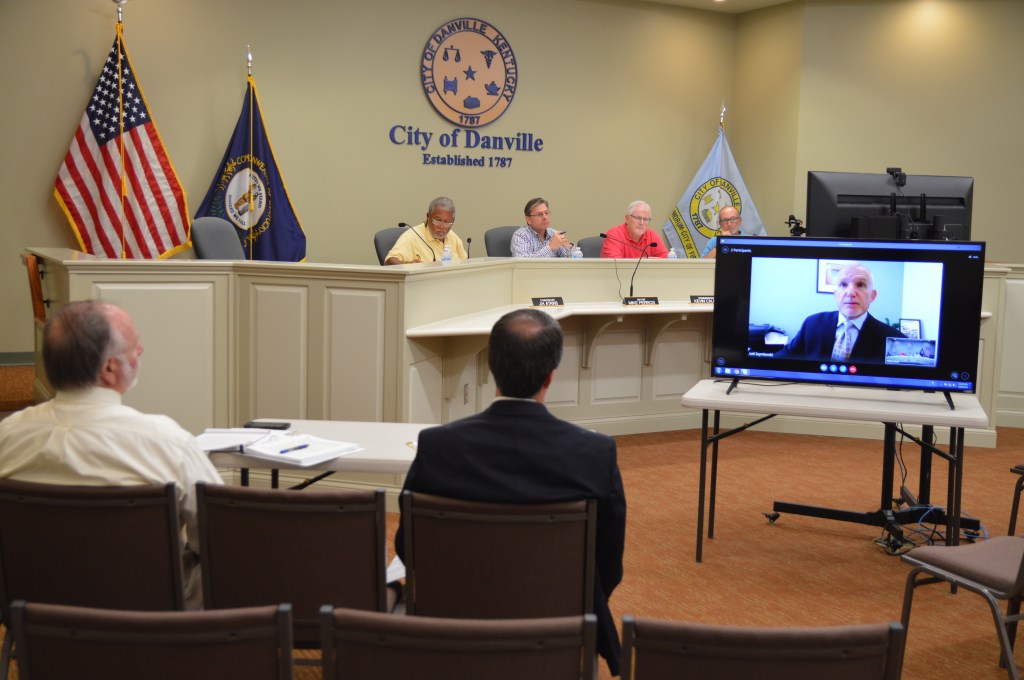 Danville City Commission interviews Lee Symborski Wednesday with GovHR USA, one of the firms that was being considered to find the city’s new city manager. Slavin Management Associates won the job. (Photo by Bobbie Curd)

The City of Danville held Skype interviews Wednesday during a special meeting to review three firms it’s considering to hire for the new city manager search. City Manager Ron Scott plans to retire at the end of this year.

The city commission chose Slavin Management Consultants, located in Georgia. Mayor Mike Perros said, “In addition to their broad experience, one of the tipping points would be the person working with us lives in Louisville.”

He said not only does that make things more convenient, as well as helps cut travel expenses, “but there’s some intrinsic value” to the recruiter living in Kentucky. 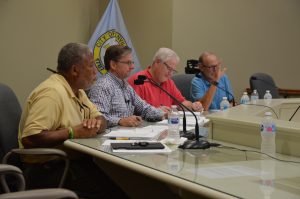 Commissioner J.H. Atkins, from left, Mayor Mike Perros and Commissioners Kevin Caudill and Rick Serres listen to a representative with a search firm Wednesday during a special meeting of the Danville City Commission. (Photo by Bobbie Curd)

There were two other major factors about the Slavin firm, Perros said, that made it the best choice: “95% of their placements stay at least two years; and 25% are either minorities or female, and I think that’s good.”

Perros did ask firms how they would plan to involve the local community in the search for a new city manager, and was given options including holding “listening sessions,” circulating an online survey and meeting with stakeholders or focus groups.

Dexter said where the process is concerned, if the commission desires to have public input, it should proceed with caution as far as setting up focus groups or stakeholder meetings, “so as not to provide some citizens an avenue of input and disqualify others,” he said.

In between interviews, Commissioner Rick Serres wondered if the commission may want to have the search firm meet with certain agencies’ directors to get their opinions on what’s needed in the next city manager.

Perros asked what others thought about holding a special called meeting with the Economic Development Partnership, “since that touches a lot of different important components of the community?”

Dexter said, “I would say proceed cautiously to involve anyone outside of the elected members of this chamber, and the identification of ‘stakeholders’ in this community by and large alienates others that are not considered in that ‘group.’ I think that this responsibility falls incumbent upon you and your shoulders to make that decision, regardless of the perceived needs, wants and desires of other stakeholders or groups that you serve or partner with.”

When discussions turned to using surveys to involve the community to relay what it wants in a new city manager, Dexter said the idea is interesting. It may involve more people who would reply online with their opinions, rather than showing up for a listening session, he said.

Scott said surveys have been circulated in the past to involve citizens, once that was randomly selected to go out in snail mail to certain stakeholder participants, and again online. He said they need to create a mechanism where citizens who can’t make it to meetings or listening sessions can still provide input, “so that you can respond adequately to their needs.”

“Which is another option,” Dexter said. “I mean, in the representative form of government, you are elected to be the voice of the people. So, in reality, your constituents should communicate concerns to you, which you discern, digest and then use as you make your selection.”

Scott said, “And, with that thought in mind, it’s certainly that we are certainly a representative form of government, if you get into any extensive survey effort, you’re talking about more time, money and effort to do that. That might fit within your desired timeline.”

The commission hopes to get a new city manager in place before the end of the year, possibly by November.

Randi Frank with Slavin Management Consultants will meet with the commission on Aug. 5. “This visit will be more of a meet-and-greet,” Perros said, but added that “we may get into” the city manager qualifications they are looking for.

“That’ll be the easy part. The hard part will be when we actually meet some of these people, or interview them — that’ll be the challenge.”

The commission started with six search firms, and reduced it to three — the cheapest three out of the six. The costs for GovHR USA, out of Illinois, were $15,000 for the placement and expenses up to $4,500. The costs of The Mercer Group, with offices in Georgia and New Mexico, were $15,000 for placement and expenses up to $6,000.