Review: You’ll laugh ‘heartily and often’ during ‘Not Now, Darling’ 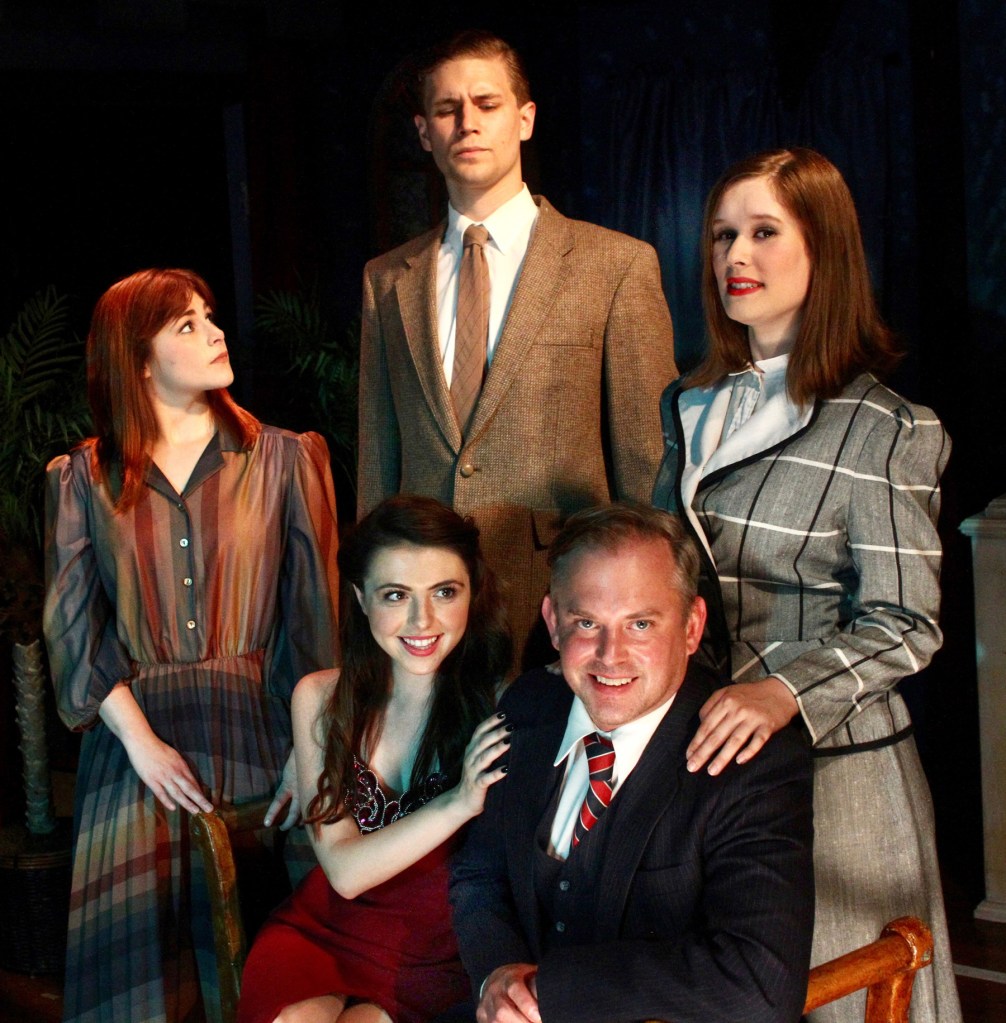 Furrier Gilbert Bodley (Drew Sutherland) is the owner of a posh London boutique, where he uses his gift of gab and suave demeanor to sell luxurious coats and charm female patrons. His current romantic obsession is Janie McMichael (Katherine Rose Reardon), an exotic dancer who has promised Bodley a night with her in exchange for a particularly expensive mink. Unable to afford the entire five-thousand pound price tag, Bodley plans to dupe Janie’s brutish and quick tempered husband Harry (Eric Hedlund) into covering the difference. Nerves get the best of Bodley, though, so he has to rely on his junior partner and morally upright boy scout Arnold Crouch (Forrest Loeffler) to help pull off the ruse.

As you might imagine, the plan goes awry in spectacular fashion. Harry eventually leaves with the mink, but decides his wife isn’t worthy of it. Instead, he gifts the fur to Sue Lawson (Bailey Angel), his secretary and mistress, causing more headaches for Bodley and Crouch. The fellows find another accomplice in hijinks in their bespectacled secretary, Ms. Tipdale (Jessa DeLuca), who harbors a crush on virtuous Mr. Crouch.

The trio find themselves quickly and thoroughly entangled in a web of deceit, subterfuge, and mistaken identities. Through a series of unforeseen events Ms. Lawson and Mrs. McMichael wind up swapping multiple fur coats and somehow losing their undergarments, forcing them to hide out at the boutique while the mess gets sorted out. To make matters worse, Bodley’s wife (Brittany Polk) returns from a trip abroad two weeks early, further derailing his intended philandering.

“Not Now, Darling,” uses many of the tropes of a typical bedroom farce. There are plenty of instances of frantic comings and goings, slamming doors, and ribald humor to keep the audience laughing along the way.

The play’s success hinges on the relationship between the two leads and, lucky for us, Loeffler and Sutherland make a great comedic team. They nail every heated back and forth verbal exchange, as well as the limited but welcome bits of physical comedy. Throughout this season, Loeffler has embraced his supporting and background characters, like his pleasant everyman turn in the last play, “Breaking Up With Elvis.” Here, he gets to steal the spotlight, despite being a more-or-less straight man for Sutherland. It’s a dynamic the audience is sure to enjoy. I was also impressed with Hedlund, in his first role of the season, as tough guy Harry. It’s especially fun to watch his character drop the bravado and get a little silly in the conclusion.

“Not Now, Darling” is a fine comedy based on the Swinging Sixties that feels updated and lively. The audience I saw it with laughed heartily and often. I was pleased to find out that there is also a movie version of the play, made in 1973, that I’m now gonna seek out for some rainy day entertainment.