30 years later, Hanson still known for his loyalty to UK 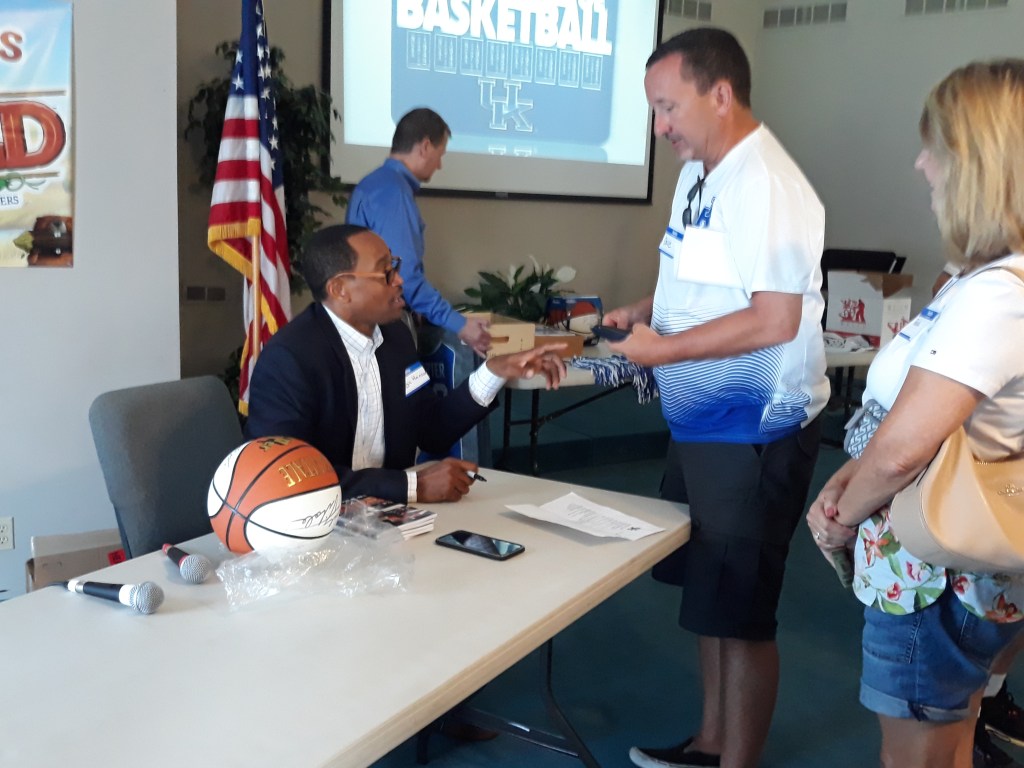 Reggie Hanson autographs his new book for a fan at the Ohio UK Convention Saturday in Franklin, Ohio. (Photo by Larry Vaught)

It has been almost 30 years since Reggie Hanson graduated from the University of Kentucky, but UK basketball fans still remember him well. 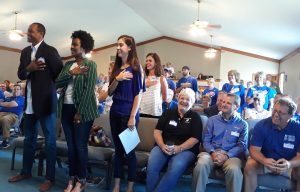 Hanson was one of the featured speakers at the Ohio UK Convention in Franklin, Ohio, Saturday and signed autographs, posed for pictures and sold copies of his new book, “10 Life Lessons: Learned As a Student Athlete.”

“No matter where we go, there will be a UK fan who knows Reggie and recognizes him,” said Lee Theodate, Hanson’s fiancee.

Part of that is because Hanson, who led Pulaski County to the 1987 state high-school championship, wouldn’t bail out on UK when the Cats went on probation under Eddie Sutton. He could have transferred and played immediately anywhere, but he stayed at UK to try and help new coach Rick Pitino put the program back together.

Hanson scored 1,167 points and later returned to UK as an assistant coach on Tubby Smith’s staff. Pitino often calls Hanson his “most important recruit” because of the message his loyalty to UK sent to others.

Yet Hanson admitted in Ohio that he grew up a North Carolina fan in Charlotte.

“I did not start out as a Kentucky fan. I am not from Kentucky. But cut me, I bleed blue now even if I was from Charlotte (N.C.),” Hanson smiled and said.

Hanson explained in depth how he got to Pulaski County. It started when his older brother, Art, dropped out of high school and entered the Job Corps. He was placed in McCreary County in Kentucky. That’s when Pulaski coach Dave Fraley got involved.

“Coach Fraley had a reputation for getting kids out of the Job Corps and back in high school,” Hanson said. “My brother told him he also had two little brothers who could also play basketball.”

Fraley and a Pulaski assistant drove to Charlotte to see Hanson’s mother and convinced her the move to Somerset would help her younger sons have a chance to get college basketball scholarships.

“She was convinced it was the right place to be and we packed up like the Beverly Hillbillies and moved,” Hanson said. “It was a big adjustment coming to a smaller town.

“I was also a die-hard Carolina fan. My teammates in eighth grade would tell me about Kentucky basketball. Finally Kentucky started recruiting me and then all these fans started talking to me and telling me about Kentucky.”

“I was here for good then,” Hanson, who now lives and works in Tampa, said. “I always talk about how special Kentucky was and still is.”

It was an adjustment to play for Pitino after being recruited by Sutton, a much more defensive-minded coach.

“I was one of the most physically and mentally tough guys you will meet but those conditioning runs Rick put us through that first year broke me down,” Hanson said.  “I would throw up before every run.

“Rick thought I was on drugs. He had (strength coach) Rock (Oliver) talk to me. Rock said, ‘What’s going on? We can get you help if you need it.’ I said, ‘Rock I have never tried illegal drugs. I am just scared of these runs.’ Then we both laughed and he said I would make it.

“Rick was great at developing you from a skills standpoint. Eddie limited my game to what I could do, but Rick wanted me to shoot 3’s, handle the ball, do everything.”

Still, the Sutton mentality was not easy to forget as Hanson found out in the Big Four Classic against Indiana in Indianapolis in one of his first games for Pitino.

“We were running the motion offense and I came open at the top of the key for a 3, but I took two dribbles and shot a 2,” Hanson said. “Rick immediately called time out and ripped into me. He said, ‘What are you doing? Shaving points.’ I said, ‘Coach, honestly I had a flashback to Eddie when I was not allowed to shoot the 3.’ Rick left me in the game and I didn’t have that problem again and had a great, great time playing for him and Kentucky.”