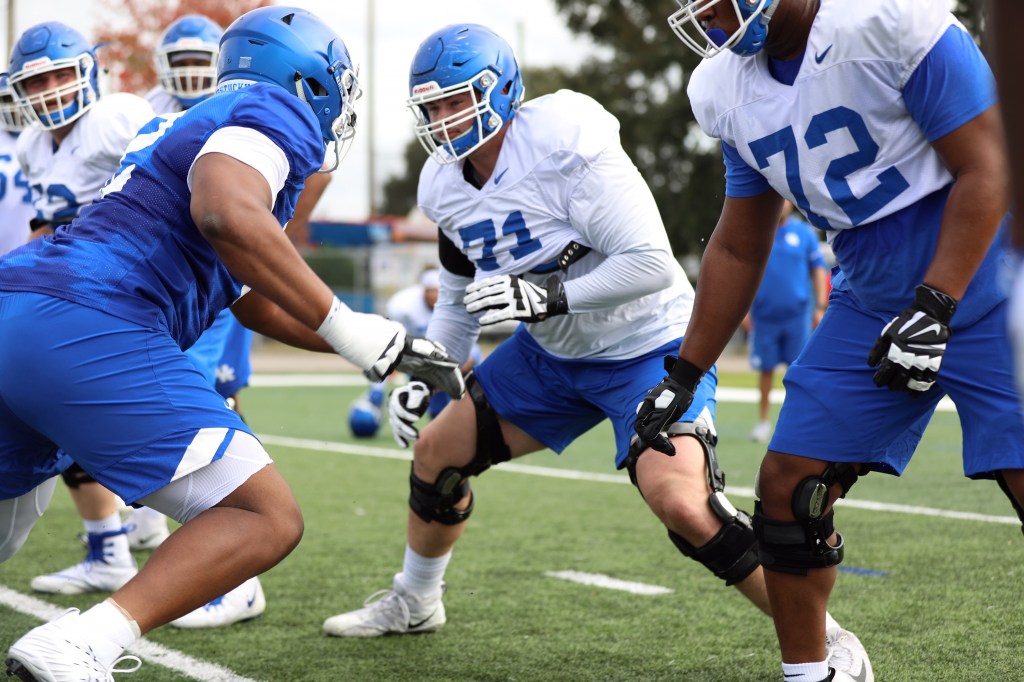 Logan Stenberg (71) is a preseason All-American offensive lineman who has an old-school mentality to his play for Kentucky. (Vicky Graff photo)

“I always felt he had a very high ceiling as a player. He was probably a little under recruited coming out of high school (in Alabama). He has got the size and mentality and intelligence. The biggest thing he has had to really work on in the last two or three years is just the technical side of things. Just the little finer details,” Schlarman said.

The 6-6, 320-pound lineman was a three-star recruit and only a second-team all-state player at James Clemens High School in Madison, Alabama. He picked UK over Southern Mississippi and Troy. After a redshirt season in 2015, he had 37 knockdown blocks and only one missed assignment as a freshman. He has started 26 games the last two years and was instrumental in Benny Snell Jr. becoming UK’s all-time leading rusher.

Stenberg had three older brothers who he credits with instilling the “toughness” he has and shows frequently during practice and games. 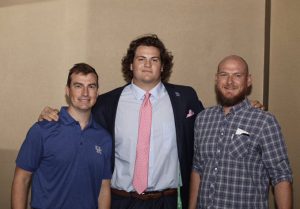 Logan Stenberg, center, credits his older brothers — who came to see him at SEC Media Days when he returned to his home state of Alabama — for instilling mental and physical toughness in him. (UK Athletics photo)

“I was the youngest, so they would absolutely abuse me,” Stenberg said. “I think you have to have a competitive edge to play in the SEC and they helped give me that. You have got to beat teams physically and mentally. We take pride in being a smart offensive line.”

He does a lot more than just play smart.

“He has always been a guy that just mauls people and I feel like that was okay with him but when you are doing that a lot of times you miss blocks because you are not always technically sound,” Schlarman said. “I think to clean his game up … that’s what he had to do to become a great player and he’s doing that.

“We saw that in the spring a lot with him being much more detailed in some of the little things that he lacked a year or two ago. He represents himself the right way.”

Stenberg at times can cross the line on being too physical in games leading to penalties or maybe a missed assignment. It’s both a blessing and curse for Schlarman to have a player like Stenberg.

“He blurs that line a little bit that as a coach will drive you crazy but you also love it because he is going to block to the whistle, if not through the whistle at times. At times it gets him in trouble and he gets a penalty and you hate that but at the same time it brings a whole mentality to your room that you love. There’s a fine line there,” Schlarman said.

The same kind of fine line that Schlarman maybe blurred at times when he was a feisty, undersized offensive lineman who started four years and earned all-SEC honors as a senior in 1997.

“I wish I was 6-6 and then I might not be sitting here talking to you,” Schlarman said.  “I think the way he plays the game, and you are absolutely right about him maybe being like me. He’s a little bit of a throwback to where you could insert him in the 70s, 80s, 90s and he would have fit in just fine and that’s not always true for players now because the game has changed a lot.

“Things change over time but he is a throwback guy and you could put him in any era and he would fit in just fine because he has those things that you do love as a coach. That’s what makes him a good player, a great player for us and someone we really have big expectations for this season.”