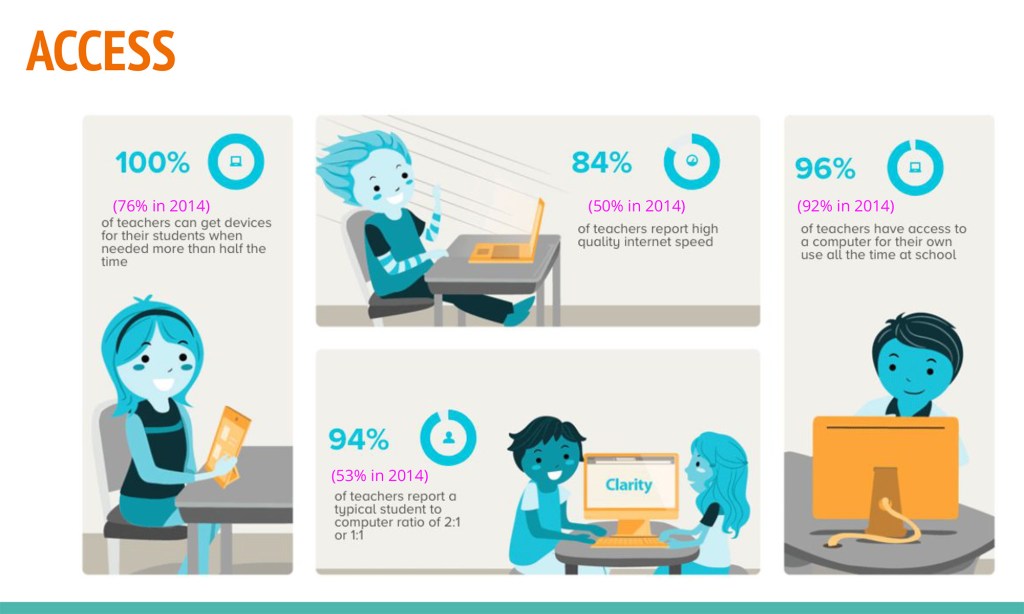 Since Boyle County Schools instituted its 1:1 technology plan four school years ago, it has greatly improved the results of its Brightbytes data survey, according to Susan Taylor, the district’s chief information officer.

Today, each Boyle County student gets a Chromebook laptop in fifth grade; they get a new one again in ninth grade. Sets of tech devices in the classrooms ensure children in elementary school have access as well, beginning in third grade, according to the district’s website.

That’s the 1:1 initiative — one computer for every student. And according to district officials, it’s a big part of why the Boyle County School District scores above the state average in the Brightbytes survey’s four areas of classroom, access, skills and environment. In the area of technology access, it’s rated “exemplary;” in the areas of skills and environment, it’s rated “advanced.” The district’s overall score of 1,135 is also rated “advanced.” The average score in Kentucky is 1,075.

Factors that go into the district’s score include:

• 100% of teachers can get devices for their students when needed, up from 76% in 2014, the year before students began receiving their Chromebooks;

• 71% of students are asked to collaborate online with classmates at least monthly, up from 49% in 2014;

• 41% of teachers spend three hours or more a year teaching “digital citizenship,” up from 25%;

• 63% of students are asked to solve problems using technology monthly, up from 53%;

• 77% of teachers give online assessments monthly, up from 39%; and

Taylor noted the point isn’t to “use technology for technology’s sake” — the primary goal should be for technology to enhance student learning. That’s what the Brightbytes survey data gets at with things like questions focused on assessing the use of communications, collaboration, critical thinking and creativity in the classroom, she said.

Taylor and Assistant Superintendent David Young said the district isn’t done improving its use of technology. One way it’s doing that is with a new initiative to get teachers creating educational videos that can be played by students and their parents at home.

These videos can allow teachers to “re-teach” a concept right at a family’s kitchen table, allowing parents to better understand what their children need to learn, as well, Young said.

“You just can’t overstate how awesome that is and how helpful that is as a parent,” he said. “… There’s just a million different uses for it. I think it’s a great use of technology.”

Taylor said creating the videos has been “a little bit more fearful for some” teachers who don’t like the idea of their face being front and center in a video, but there are ways around that to make things easier for those teachers. “I think for the most part, it’s been very well received.”