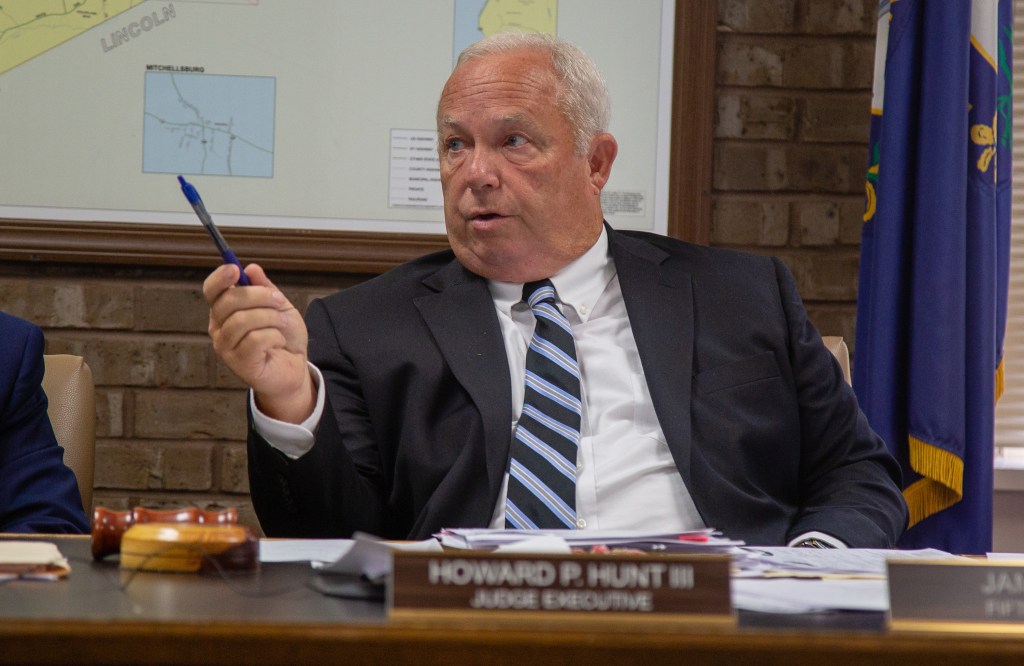 Boyle County Judge-Executive Howard Hunt presented data on property taxes for every county in Kentucky to magistrates on Tuesday, as a "point of information" prior to any discussions on what Boyle County's property tax rate will be for 2019. (Photo by Ben Kleppinger)

Businesses in Boyle County made a lot more money than anticipated during fiscal year 2018-19, and the county government’s budget benefited significantly as a result.

Boyle County Fiscal Court originally budgeted to collect $625,000 in net profits taxes — which are collected from businesses on the profits they produce — during the year. Treasurer Mary Conley projected the county would actually get $699,000, but even that revised figure turned out to be too low: The actual revenue wound up at $816,700, Conley reported this week. That’s $191,700 more than the budget and $117,700 more than Conley’s projection.

“That kind of saved us from eating into our surplus,” as the county has been doing regularly for several years, Conley told county magistrates.

The county’s general fund balance has been dropping by around $200,000 annually for some time now, Conley has reported previously. But thanks to the net profits tax gains, “we only ate into our surplus this year at $57,800.”

A “categorical report” is being compiled for the fiscal court to further break down how much in net profits tax was paid by different types of businesses, Conley said.

Boyle remains in the bottom quarter of Kentucky counties when all the different county government property taxes are considered together, including property taxes for public libraries, ambulance services, fire protection districts, extension services and health departments, among others.

Asked whether presenting the information meant Boyle County would be considering a property tax increase in 2019, Hunt responded, “the possibility is never off the table.”