Bromley remembers Lorenzen as ‘unique’ on and off the field 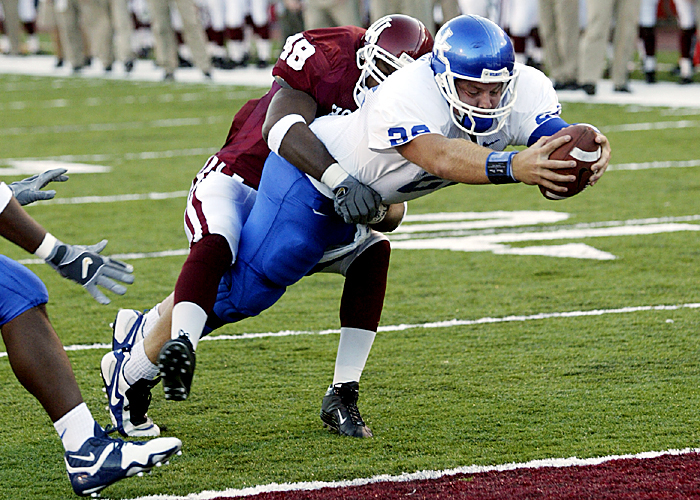 Former WKYT-TV sports anchor Rob Bromley is one of the media members who had a chance to not only watch Jared Lorenzen play in high school and at Kentucky, but he also got to interact with him in interviews.

“What I will remember most is that over the many years I can think of no one to compare him to.   There are unique athletes who come along … but not like Jared… once in a lifetime chance to see someone of his size perform at quarterback the way he did,” Bromley said.

Lorenzen died at age 38 and his passing continues to resonate with UK fans who helped raised over $100,000 for his family in less than a week after his death.

“Jared wasn’t just good, he was great …  record setting,” Bromley said.  “He goes down as one of the most popular players at UK over the last 25 years along with the likes of Tim Couch, Randall Cobb, Jacob Tamme and Benny Snell.

“But as unique and as great as he was on the field.. he was every bit as good off the field, building a strong relationship with BBN.”

Bromley can’t single out a specific play, game or interview that stands out to him more than others about Lorenzen.

“I think I will just always remember the way he approached the physical challenge he faced later in his life with his weight.   Playing careers tend to be short. Life goes on,” Lorenzen said. “He faced a challenge (his weight) that he understood could become life threatening.

“It always seemed like Jared lived life to the fullest and good naturedly handled questions about his weight. Very publicly he faced the situation and made a serous effort to lower his weight and improve his health.

“I’ll remember Jared as a fighter on the field and off. It’s such a loss for the BBN.”

Country music singer J.D. Shelburne paid tribute to former UK quarterback Jared Lorenzen’s memory by wearing a Lorenzen No. 22 blue UK game jersey during his concert July 13 at Kentucky Speedway before the Quaker State 400. However, don’t ever doubt how big a basketball fan he also is.

“I am still not over last year. I thought we were going to win it all,” Shelburne said. “I am excited to see what Cal (John Calipari) has this year. I don’t know much about the team yet but it sure seems like we could be as good or better than last year.

“I want Kentucky to win another national championship about as bad as anybody. I hear so much grief on the road about how Cal is never going to get another one. I know it’s hard to win titles. I love football but basketball is in my heart. I can’t help it. I grew up playing basketball and basketball was all my family talked about. We get jazzed up for UK basketball.”

He’s had to make a few modifications since his marriage to accommodate his wife, Amy.