Library fountain back in business 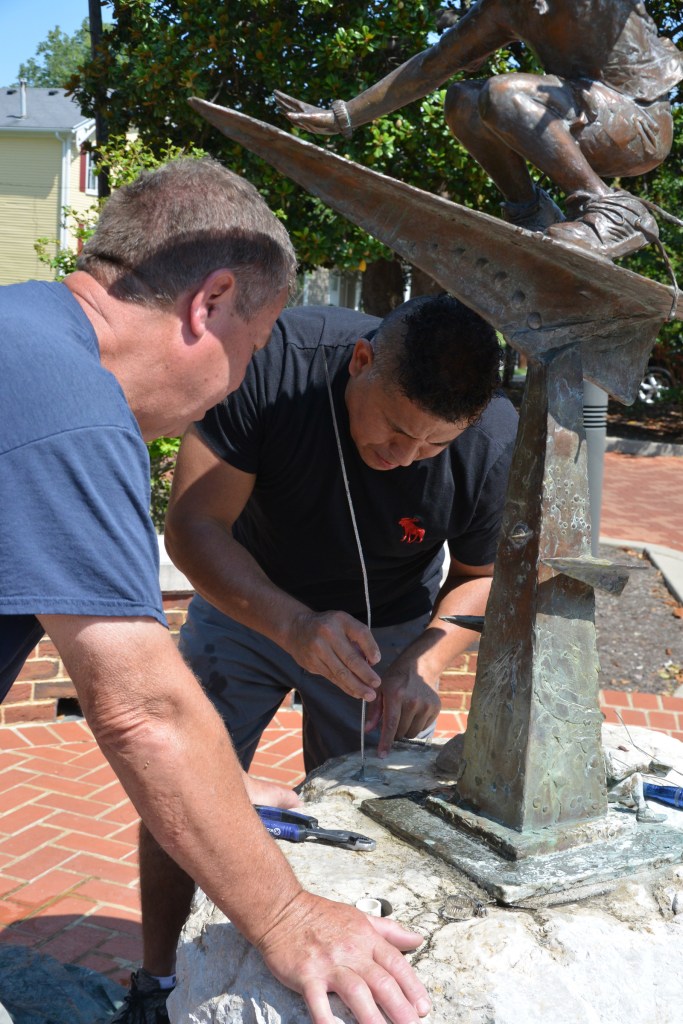 Allen Arth, left, and Isai Rivera, who are responsible for the upkeep of the Boyle County Public Library building and grounds, devise a way to fish out small stones that children have dropped into the water fountian in the reading park that caused it to not flow properly all summer. (Photo by Robin Hart)

The Weisiger Park fountain has been getting most of the headlines recently, but it was another fountain that got fixed this week.

The limestone water fountain at the Boyle County Public Library reading park has been sputtering for most of the summer. But on Thursday, Allen Arth and Isai Rivera, who are responsible for the library grounds and building, worked to solve the problem.

Earlier this summer they discovered that the tubes where water was supposed to flow from the top of the boulder were clogged with creek rocks. Arth said children and other visitors had been dropping small rocks down into the tubes, which eventually blocked water from spouting out.

The blockages also caused two of the fountain pumps to burn out, Arth said.

On Thursday, Arth and Rivera devised a way to fish out the rocks without damaging or disassembling the fountain. A slender metal rod was bent at one end so when Rivera eased it down the tube and twisted, a rock was captured on the “hook” so that he could pull it out.

Rock by rock, pebble by pebble, Rivera patiently pulled each rock out until water was once again freely bubbling up. And each time he tossed a rock to the side he laughed. “It’s the little things that make me happy,” he said.

When they had gotten several rocks out, the rod was too short to reach further inside the tube, so Arth went back inside to create a much longer tool.

To prevent the problem from happening again, Arth said they have devised a simple solution — replace the foundation’s small creek rocks with larger rocks that won’t fit inside the tubes.

Isai Rivera carefully pulls out one of the small stones that has clogged the fountain at the library’s reading park for several months. (Photo by Robin Hart)

With a hooked rod in one hand, Isai Rivera uses his fingers to pry out a stone that had clogged the water fountain pipe at the library. (Photo by Robin Hart)

Isai Rivera is happy when he fishes out the last rock and water begins to flow out of the water fountain tube at the Boyle County Public Library’s reading park on Thursday. (Photo by Robin Hart)

On Thurday, Isai Rivera fishes out creek rock that over time, children and visitors have dropped into the water fountain tubes at the Boyle County Public Library’s reading park causing it to fail. (Photo by Robin Hart)