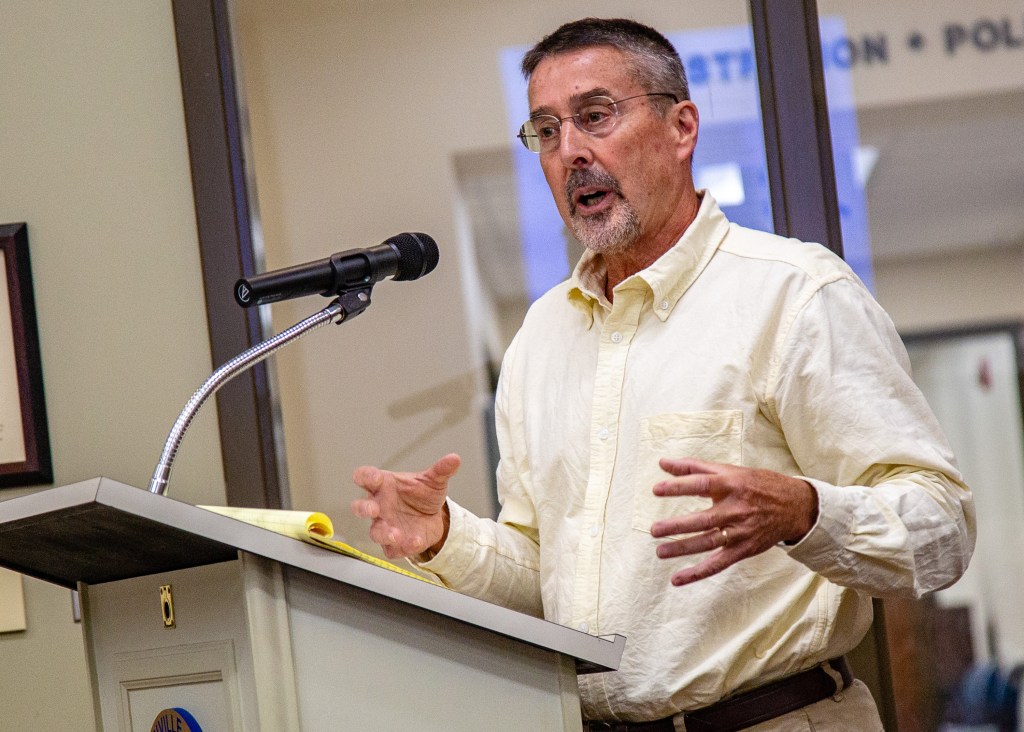 Local attorney Mark Morgan warns P&Z commissioners he believes modifications to their hazardous pipeline regulations could put local governments at risk of going bankrupt if they lose a hypothetical blockbuster lawsuit from a pipeline company. (Photo by Ben Kleppinger)

A major update to Boyle County’s zoning ordinance was tabled again this week, after the grassroots group Citizens Opposed to the Pipeline Conversion raised concerns over how it would alter regulations for hazardous pipelines.

“I think there are shortcomings in the proposed ordinance that were not thoroughly considered,” said Mark Morgan, a Danville attorney who has been a leader in the COPC.

Boyle County’s P&Z regulations concerning hazardous materials in pipelines dates back to 2015. That’s when the COPC got the P&Z Commission to require any company wishing to pipe hazardous materials through the county to get a conditional-use permit.

The move was intended to protect against a plan from Houston-based energy giant Kinder Morgan, which intended to use Tennessee Gas Pipeline No. 1 to transport “natural gas liquids” — highly explosive byproducts of oil fracking — from northern Ohio to the Gulf Coast.

A Kinder Morgan representative admitted to COPC members and other local residents that it had chosen Pipeline No. 1 rather than trying to pipe the fracking byproducts along the eastern coast because the company thought it would face less opposition from a less educated, less activist population, Morgan alleged during Wednesday’s hearing.

Instead, they ran into far more opposition than they imagined in Boyle County. Ultimately, Kinder Morgan abandoned its plan to repurpose the pipeline, which currently carries natural gas. 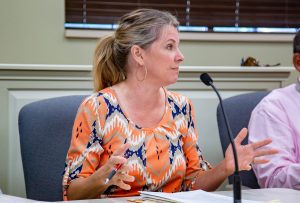 P&Z Commissioner Wendy Rochester made the motion Wednesday to table a proposed zoning ordinance amendment, over concerns about how it would change the existing regulations for hazardous pipelines. (Photo by Ben Kleppinger)

The zoning amendment as it stands today requires a conditional-use permit for “any pipeline constructed or converted to transport hazardous liquids under pressure.” It requires the local Board of Adjustments to consider eight factors before granting the permit, including proximity to industrial areas where explosive or hazardous materials are stored; and proximity to “schools, daycare facilities, hospitals, nursing homes, jails and prisons.”

It also states the Board of Adjustments can hire an expert consultant to examine any pipeline project and the applicant for the project must pay for the consultant.

The proposed zoning ordinance amendment being considered by P&Z tackles a lot more than the pipeline rules; it affects regulations for signs, short-term rentals, agricultural lot sizes and much more. It would repeal the 2015 pipeline amendment and replace it with new rules based largely around three restrictions: Anyone building or repurposing a pipeline would have to:

• comply with 1,000-foot setbacks from numerous types of buildings, including churches, schools and residences;

• avoid residential zones entirely, because pipelines would not be an allowed use; and

• obtain 100-foot easements on all properties the pipeline would travel through.

Could proposal be too strict?

Morgan warned P&Z commissioners he thinks the proposed rules are so strict that they amount to an all-out ban on any new or repurposed pipelines.

“I don’t want something that dangerous in our community … but to ban something under our Constitution constitutes a ‘taking,'” he said. “Our Constitution protects private citizens from a taking of their property without just compensation in these United States. And that’s a good law.”

Morgan said if an applicant trying to repurpose a pipeline could prove the new rules actually result in a total ban on what they want to do, they could sue P&Z, Danville and Boyle County for “just compensation.” In the case of Kinder Morgan’s defunct pipeline plan, the company was planning to invest around $5 billion; Morgan said it would be reasonable to expect a company wants a $10 billion or $20 billion return on such an investment; he suggested that’s an amount a company might seek in damages for just compensation.

“That would bankrupt our county and our city and our Planning and Zoning Commission,” he said.

Morgan said the existing rules were thoroughly researched, backed up with evidence and expert opinions and “carefully crafted … to withstand a legal challenge.”

If Boyle County were ever sued over the existing rules, “it would be a winnable and affordable case,” Morgan said. “Conversely, the new proposed ordinance — which I wish would be upheld by the courts because it gets right to the heart of the matter, it stops any future hazardous pipelines — that would be a real problem in the courts.”

‘No reason to act right now’

Morgan urged the P&Z commission to table the zoning ordinance so they can look more carefully at the issue and make sure they know what the effects of any changes will be.

“There is no reason to act right now,” Morgan said. “… We don’t have a serious threat at this time … I propose to you that we use this opportunity and time wisely.”

Sarah Vahlkamp, another member of the COPC, also asked P&Z to take it’s time and “investigate a little more” before changing the existing pipeline rules. She noted the efforts to oppose Kinder Morgan’s plan were supported from all sides and by all political groups in Boyle County, but they also had support from the Bluegrass Area Development District, Kentuckians for the Commonwealth and even the Kentucky Legislature (the state Senate passed a resolution stating “concerns” about the plan, after a Boyle County resident pushed for it).

“This was not just a little group of crazy environmentalists doing something,” Vahlkamp said. “This was a bigger thing. We had the National Park Service writing letters … because the pipeline came so close to Mammoth Cave.”

‘Possible weaknesses with both’

P&Z Attorney Henry Smith said he had met with the COPC to discuss the points raised by Morgan previously and he found their perspective helpful. He acknowledged there could be issues with the proposed ordinance’s 1,000-foot setbacks.

“I see possible weaknesses with both the proposed ordinance and the existing ordinance,” he said.

Smith said he doesn’t think the new ordinance would amount to an outright ban on pipelines — he believes a thoroughly researched map would show there could still be legal pathways through the county for a pipeline to take under the proposed rules.

Smith also noted the proposed rule concerning 100-foot easements on every affected property “does ring alarm bells” — that piece of the proposal may have to be struck if further legal review doesn’t turn up supporting court precedents.

P&Z Director Steve Hunter said he has had serious questions about the existing pipeline amendment ever since he was hired as director in 2017. There are pieces of it he believes are “completely flawed” and he was attempting to fix it and make it better with the new ordinance.

For example, the Board of Adjustments has no legal authority to hire anyone — that would have to be a duty of the P&Z Commission itself, he said. And requiring a single conditional-use permit for a project that could span 30 miles and travel across thousands of separate properties seems absurd, he said. 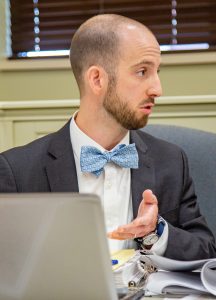 Hunter also had issues with the basic idea that P&Z would regulate a product inside a pipeline. He questioned if Kinder Morgan’s Pipeline No. 1 has been in the ground since World War II, why it wouldn’t be considered grandfathered in and not subject to P&Z rules, since it’s a structure that predates zoning in Boyle County. And he said hazardous materials such as natural gas liquids can travel today on roads, by rail lines, on boats — and none of that can be regulated by any zoning commissions.

Tabled for a second time

At the end of the day, Hunter said there’s so much other important stuff in the zoning ordinance amendment that he doesn’t want to see the pipeline issue bog everything down. If the P&Z Commission needs to keep the old pipeline language in order to pass it, Hunter said so be it — though he strongly urged them to do away with or alter the existing language that says the Board of Adjustments can hire an expert.

P&Z Commissioner Wendy Rochester ultimately made the motion to table the public hearing and it passed unanimously. This was the second time the zoning amendment public hearing has been tabled; it was first discussed for around an hour during P&Z’s June meeting.

Rochester said Morgan provided her with “new information” she thinks needs to be looked into.

Hunter suggested he could assemble the attorneys for Danville, Boyle County and P&Z and “sit down and talk about where we want to go with this” before the next P&Z meeting in August.

He said he knows of a pair of economic development projects — a restaurant and a “major investment on the bypass” — that are waiting to move forward until the zoning ordinance is finalized.

“I’m fine with tabling another month,” Hunter said. “At some point, maybe leave the old stuff in. But we need to move on with the other 110 pages.”

Morgan asked if he could invite Tom FitzGerald with the Kentucky Resources Council, who helped draft Boyle County’s existing pipeline regulations, to participate in the attorneys’ discussion; P&Z Chair Jerry Leber said he would be “100-percent for that.”

If P&Z approves a zoning ordinance amendment, it must still be approved (and potentially modified) by Danville City Commission and Boyle County Fiscal Court before it could take effect.