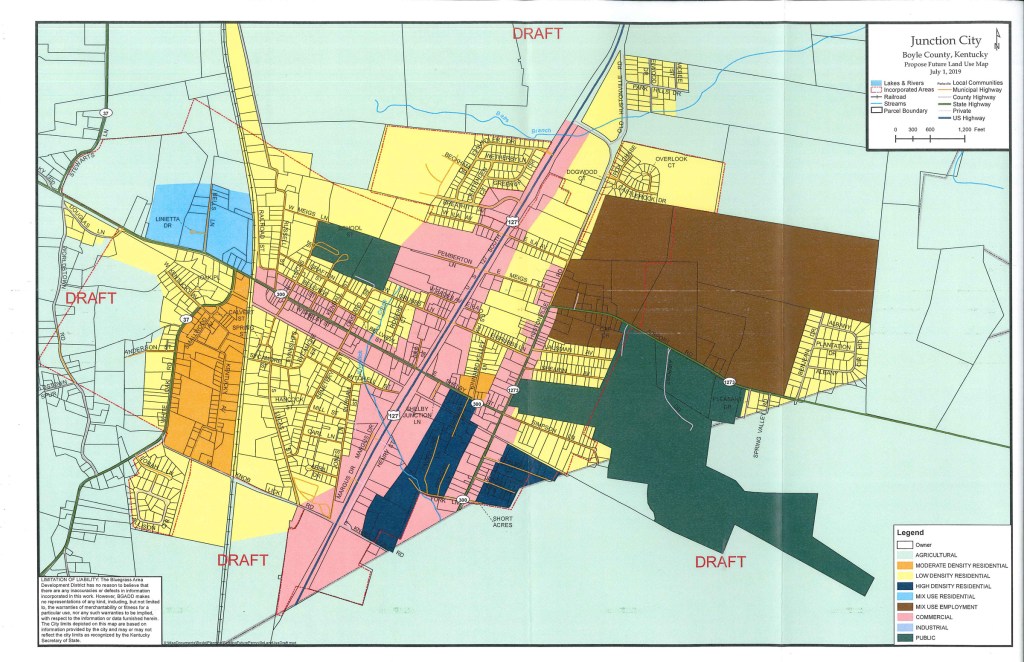 Junction City’s future land-use map could promote business and industrial development near the Danville-Boyle County Airport. It could also allow the city to have the densest residential development in all of Boyle County.

The local P&Z Commission approved Junction’s new future land-use map unanimously this week, after holding a public hearing during which no one spoke for or against it.

The FLUM was developed by a committee of P&Z officials, Junction City elected officials and local stakeholders, according to P&Z Director Steve Hunter.

A future land-use map (FLUM for short) does not dictate actual zoning, nor does it prohibit anyone from continuing to use their land the way they currently do. Instead, it specifies what type of development is expected to occur in the future. FLUM categories define what zone changes might be allowed and what kinds of development projects might be approved down the road. 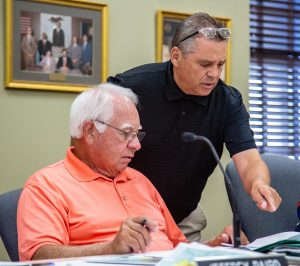 P&Z Director Steve Hunter, standing, points out something on a map to P&Z Chair Jerry Leber during this week’s P&Z Commission meeting. (Photo by Ben Kleppinger)

Hunter said Junction’s new FLUM was originally slated for approval in June, but after the FLUM committee held an open house, residents who attended brought up several minor issues. So the committee went back and fixed things, which delayed approval by a month.

The new FLUM plans for commercial development along the U.S. 127 corridor through the city, as well as along the main drag, Shelby Street, and Ky. 1273/Old Hustonville Road. Much of the rest of the city is designated for low-density residential.

Two areas in east Junction are designated high-density residential. Hunter said that means future developments could have more than 16 units per acre. “We have no categories of that in the City of Danville, interestingly enough,” Hunter said.

North of the airport is a large region designated for “mix-use employment.”

Hunter said there’s a “pretty big farm” that makes up most of the land in that category. The owner of the farm attended the committee’s open house and “he was pretty much on-board with that.”

“He said he’s going to farm it as far as he knows, but down the road he doesn’t think it’s a bad thing to have that label of mix-use employment,” Hunter said. “That’s always a positive when the property owner comes out on a major change like that and gives us their OK on something so dramatically different.”

The northwest corner of Junction — Bells Lane and Linietta Drive — is designated “mix-use residential,” a category used heavily by Perryville for its downtown area when it completed a similar FLUM update process last year.

The mix-use residential category allows for things such as businesses run out of homes or first-floor businesses with apartments on the second floor.

Hunter said Junction’s old FLUM — created in 2007 and defunct ever since Junction City removed itself from P&Z regulations in 2011 — had “most of the town yellow” for low-density residential.

“So there’s a lot of changes here,” he said. “… It’s unique for Junction City and they were OK with it.”