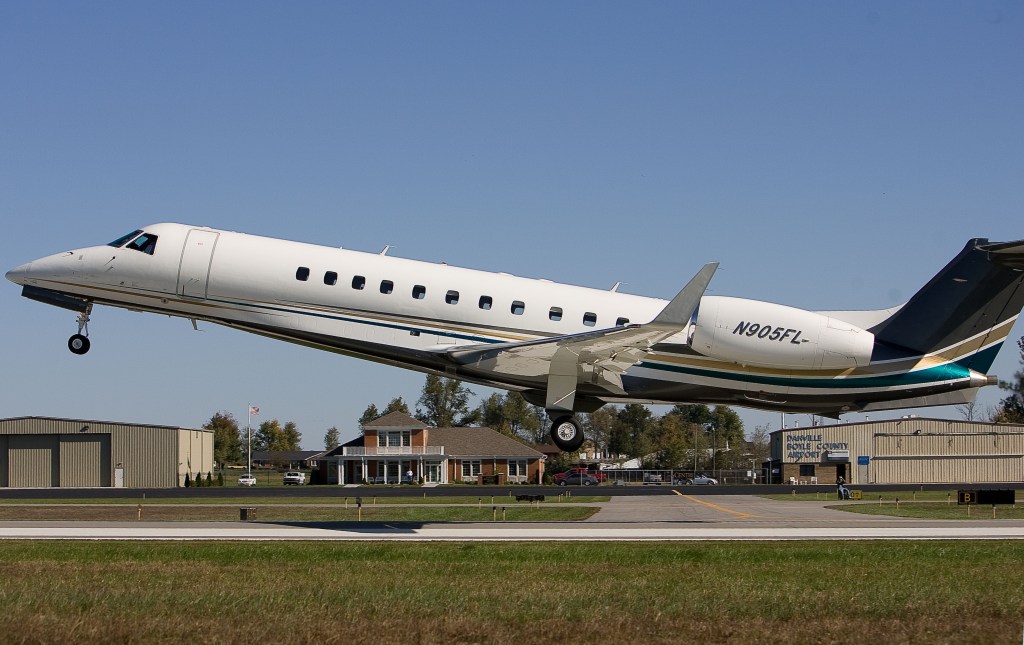 The Danville-Boyle County Airport has been annexed into the city of Danville by a vote of 3-2 by city commissioners.

Gears are turning that could lead to further expansion of services at and business surrounding the Danville-Boyle County Airport. Those involved say they are excited about the possibilities because they involve pursuing the vision the late Stuart Powell had for what the airport could mean to the county and the region.

Earlier this month, airport representatives, local officials and representatives for Eastern Kentucky University held a meeting to discuss the possibility of EKU using the Boyle airport as the university’s aviation program continues to grow.

By all accounts, the meeting was successful in getting the different groups on the same page and looking ahead to the future possibilities, according to some of those who attended. 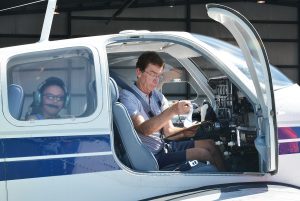 Rob Caldwell, chair of the airport’s board, checks his list before taking off with a couple of young passengers during Young Eagles Day, July 15, at the Boyle airport. (Photo by Robin Hart)

The “strategic planning session” held at EKU helped Boyle County’s community leaders think through what it will look like to build an “economic ecosystem” at the airport, in which EKU’s participation might be just one piece, said David McFaddin, senior vice president for operations and strategic initiatives at EKU.

McFaddin said the meeting came about because EKU didn’t cut ties with this area when it closed its Danville satellite campus a year ago. The closure was necessary as “part of some other strategic university reductions and efficiency” moves, but “we didn’t say we weren’t going to be here to serve this community; it’s just we weren’t going to be here” with a physical campus anymore, he said.

In fact, EKU already utilizes the Boyle airport to a certain extent — there are planes that are part of the aviation program touching down there almost daily, he said.

EKU learned in discussions with the Danville-Boyle County Economic Development Partnership that the aerospace industry is a targeted industry for development and recruitment in Boyle County. That fact pairs nicely with a couple other facts: Kentucky is already top three in the nation for aerospace industrial activity, and EKU has a thriving aviation program.

“We’re the only four-year aviation program in the state,” said McFaddin, who noted there’s a growing job market in the aerospace industry — it’s projected there will be 750,000 more jobs in that sector by 2025.

EKU talked with state Rep. David Meade (R-Stanford), who represents Lincoln County, the other county in which the airport sits. Meade helped lead a conversation about using aerospace to “leverage” the local economies in Lincoln and Boyle counties, McFaddin said.

All that culminated in the July 10 meeting, during which some “visionary concepts” emerged, McFaddin said.

The airport wants to expand what it offers; the area wants to recruit and retain aerospace business; Meggitt Aircraft Braking is already in Danville and growing its presence; EKU wants to continue growing its aviation program, which has just about doubled in size in the last two years. “We’re exploring all those options,” McFaddin said. “… There’s an immense opportunity for partnerships.”

“Eastern is emphatic — they don’t want to be a driving wheel; they want to be a significant spoke in the wheel” of growth at the airport, Hunt told members of the EDP board earlier this month.

Hunt said the July 10 meeting didn’t result in anything “set in concrete,” but it did produce “a lot of good, positive discussion moving forward.”

Hunt acknowledged there have been various discussions about EKU using the Boyle airport more over the years that haven’t previously gone anywhere.

“It’s kind of been table talk, but it really hadn’t been much more than that,” he said. “Now, I think it’s starting to get some legs.”

Rob Caldwell, chair of the airport’s board, confirmed the board has expressed an interest in playing a role if EKU were to expand it’s pilot-training or maintenance technician programs.

“(EKU’s aviation) program is one of the fastest growing programs in the country and given all of the aviation/aerospace-related industry that’s in Kentucky … this would just be huge,” he said. “But there has been no commitment at this point.”

Caldwell acknowledged the driving force of the late Stuart Powell, who helped make the airport what it is today and for whom the airport’s airfield is named.

“Stuart Powell’s vision was for this airfield to meet the needs of the community through the years,” Caldwell said. “And if there are opportunities to help the community and expand the airport, that was well within his vision.” 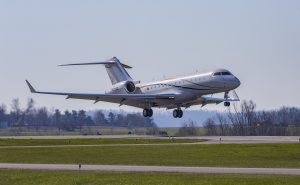 Hunt said growth at the airport would have very positive impacts on workforce development for the area; he similarly pointed to Powell’s vision for what the airport is and could become.

“It’s right for the county, but it’s also honoring his vision of growth and development,” Hunt said.

Powell spent nearly 68 years in the car business, selling Fords and other models in Boyle and Garrard counties. He was also a driving force in developing Boyle’s airport in a highly regarded regional airport with a 5,000-foot runway and a waiting list of airplanes wanting hangars.

Powell died in September 2017 at the age of 89. “I have no doubt that some of his last thoughts were about the airport, because it was a part of his family,” Caldwell said at the time of Powell’s passing.

Beyond the airport’s borders

McFaddin said one thing to come out of the July 10 meeting will be a report, which EKU is currently compiling. The report could more specifically spell out some of what EKU is looking for from the airport and what steps could be taken to move partnerships forward.

EDP President Jody Lassiter said that’s an important development — Boyle and Lincoln counties may soon have specifications or parameters that would help the airport develop in a way that makes EKU want to increase its activity there.

One path forward could be with development of a “two-county industrial park” in the area of the airport, Lassiter said.

Junction City and the Danville-Boyle County Planning and Zoning Commission may already be helping in that regard, through the new future land-use map for Junction City, approved this week.

The map designates a large area of farmland to the north and west of the airport as “mixed-use employment” — a category meant to show a desire for increased business activity.

“We targeted that simply because of its location and proximity to the airport,” P&Z Director Steve Hunter said Wednesday. “In talking with the airport, they saw some benefit of job creation in this part of the county.”

Lassiter and Hunt both said the benefits of a growing airport extend beyond just Boyle and Lincoln counties. The Boyle airport already serves businesses in Boyle, Lincoln, Garrard and Mercer counties daily, Lassiter said. Hunt said the Boyle airport is one of only about 10 in the state capable of handling a certain level of fixed-wing air traffic on a daily basis.

While there are not currently any plans for improvement of the roads around the airport, Lassiter mentioned that as something that could be very helpful in the future.

“Boy, I would love to see maybe a three-lane direct-access” road from U.S. 127 to the airport, “rather than the curves,” Lassiter said. “Particularly if there’s an industrial park associated with it.”

There are no hard timelines on anything happening at this point, though Hunt said he would like to see some plans realized within two years.

McFaddin said while all the ideas are very exciting, “it will take a little bit of time to get that off the ground — no pun intended.”

“I was very pleased at the positive conversations (during the July 10 meeting),” Lassiter said. “And everyone’s absolute support for the vision that Stuart Powell put into effect a long time ago and extolled to his dying day. And we need to continue to build upon that foundation.”

This story has been updated to reflect the correct date of Stuart Powell’s death.