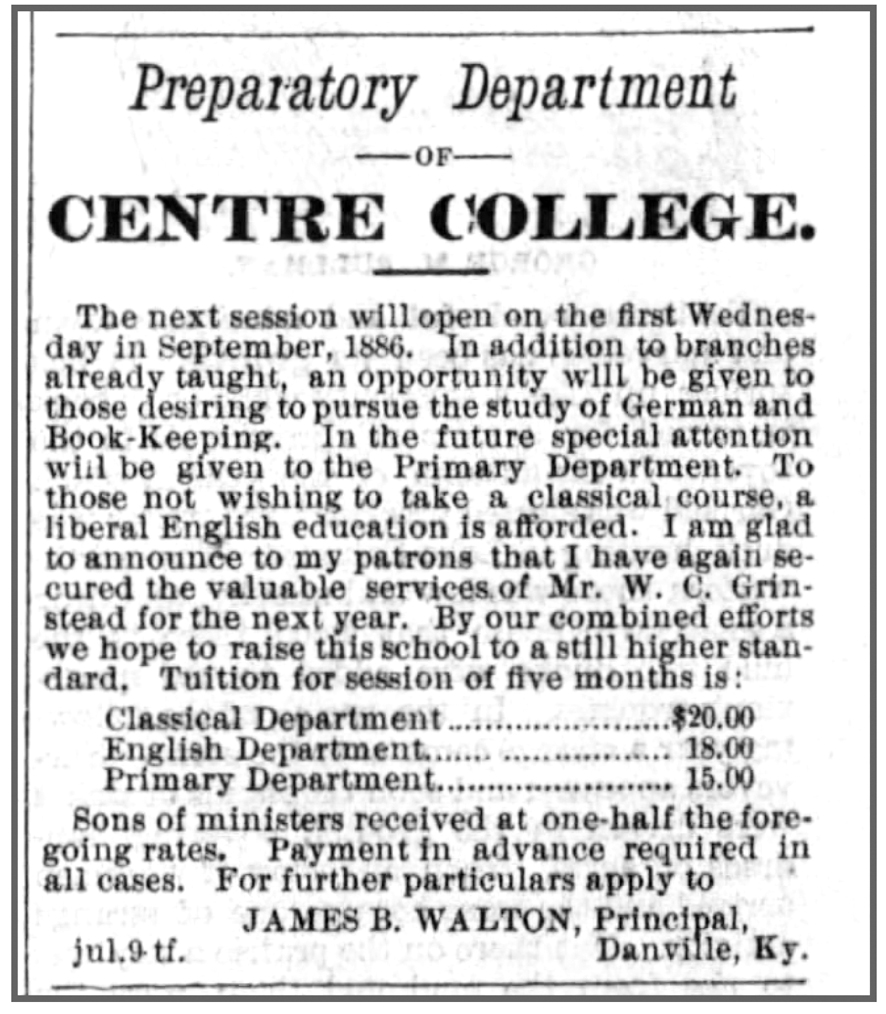 Advertisements for the classes at Centre College appeared in the Kentucky Advocate prior to enrollment in the Preparatory Department. (The Advocate-Messenger archives)

James Benjamin Walton was a professor of Walton Preparatory at Centre College in the late 1900s. The Virginia native came to Centre as a student and graduated in 1872. He was in charge of the college’s Preparatory Department from 1877 to 1894.

James added German and bookkeeping to his usual classes in the Preparatory Department of Centre College. His assistant was W.C. Grimsted, according to an article in the Advocate in August 1886.

Costs were $20 for classical department, $18 for English department and $15 for primary department. Sons of ministers received their education for half price for the five-month period.

He used his home for the boarding and training school for young men from a distance who attended the preparatory department of Centre. He made the home a place for study hours and exercise.

When he retired from Centre in January 1894 he was replaced by William J. Price and Professor Rupley, principal.

While in Danville, Walton and his family lived in a house on Main Street, known as the Martha McAlister property. He had purchased the house for $5,500 in 1890 and spent about $2,000 making improvements. While in Danville, he was also active in the Anaconda Club.

Walton sold the house and household and kitchen furniture before he moved to Colorado.

H.S. Withers of Stanford bought the house at auction for $5,625.

Walton was born in 1852 in Louisa, Virginia. He was a son of James and Susan Quisenberry Walton.

He was a professor when he met his wife, Matilda (Tillie) Farrand in 1872. She was attending Caldwell Institute for Young Ladies. They were married on July 7, 1872, in Danville.

Born April 14, 1850, in Lexington, she was the daughter of Samuel E. Farrand and Jane Elizabeth Alling.

She was later a teacher’s assistant with Mrs. William Dike at the local school for music.

Thomas was a piano salesman in Springfield, MA, when he was struck by a train and killed. He was 26 years old. He had a wife and daughter.

The family is buried in Evergreen Cemetery in Colorado Springs, Colorado.