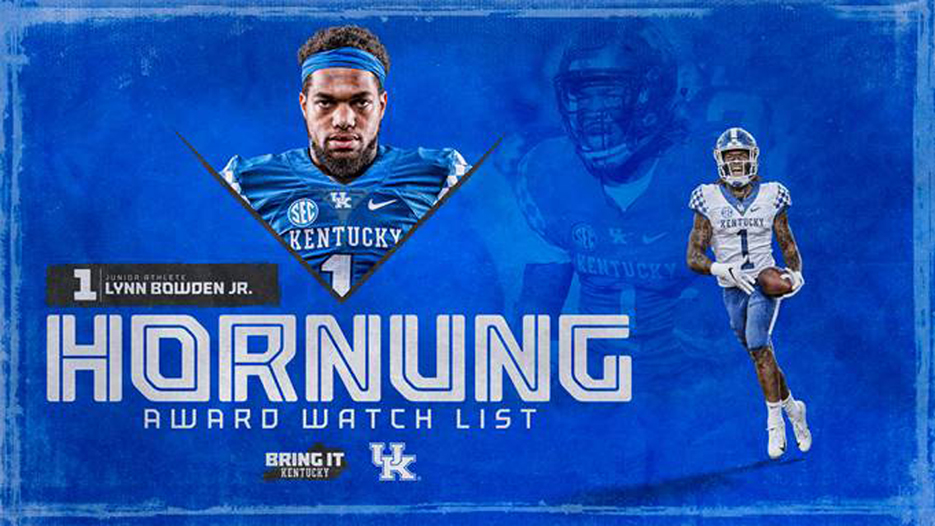 LEXINGTON– Kentucky athlete Lynn Bowden Jr. has been named to the 2019 Paul Hornung Award watch list, it was announced on Thursday by the Louisville Sports Commission. The award annually is given to college football’s most versatile player.

Bowden, from Youngstown, Ohio, is coming off a sensational 2018 season that saw him break the school record for most receptions (67) by a sophomore in school history, surpassing Derek Abney’s 66 from 2001. He led the Wildcats in catches, receiving yards (745) and touchdown receptions (five) and hauled in the most catches in a season since current NFL star Randall Cobb caught 84 passes in 2010.

Bowden enters 2019 needing just 45 receiving yards to become the 30th player in school history to reach 1,000 for their career. With 16 more receptions he would become the 17th UK player to have 100 career catches. He is also on the Biletnikoff Award Watch List for college football’s most outstanding receiver.

The All-Southeastern Conference return specialist totaled two punt returns for TDs in 2018 on just five total returns. With a 58-yard punt return for a TD in the first quarter vs. Penn State and 67-yarder at Missouri, he was one of just three players nationally last season with two punt returns for a TD. He also returned 25 kickoffs for an average of 21.6 yards per return. 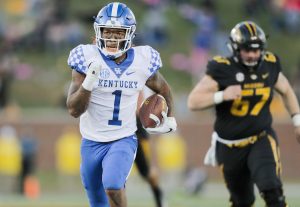 Kentucky receiver and return man Lynn Bowden, Jr. is on the watch list for the Paul Hornung Award given to the nation’s most versatile player. (Vicky Graff Photo)

The 2019 Hornung Award winner will be announced on March 4, 2020 at the award’s annual dinner, to be held at the Galt House in Louisville, Kentucky. Nicknamed The Golden Boy, Hornung was a Heisman Trophy-winning quarterback at Notre Dame in 1956 and the NFL’s Most Valuable Player with the Green Bay Packers whose versatility earned him enshrinement in both the College and Pro Football Hall of Fames.

Tickets are available at UKFootballTix.com.