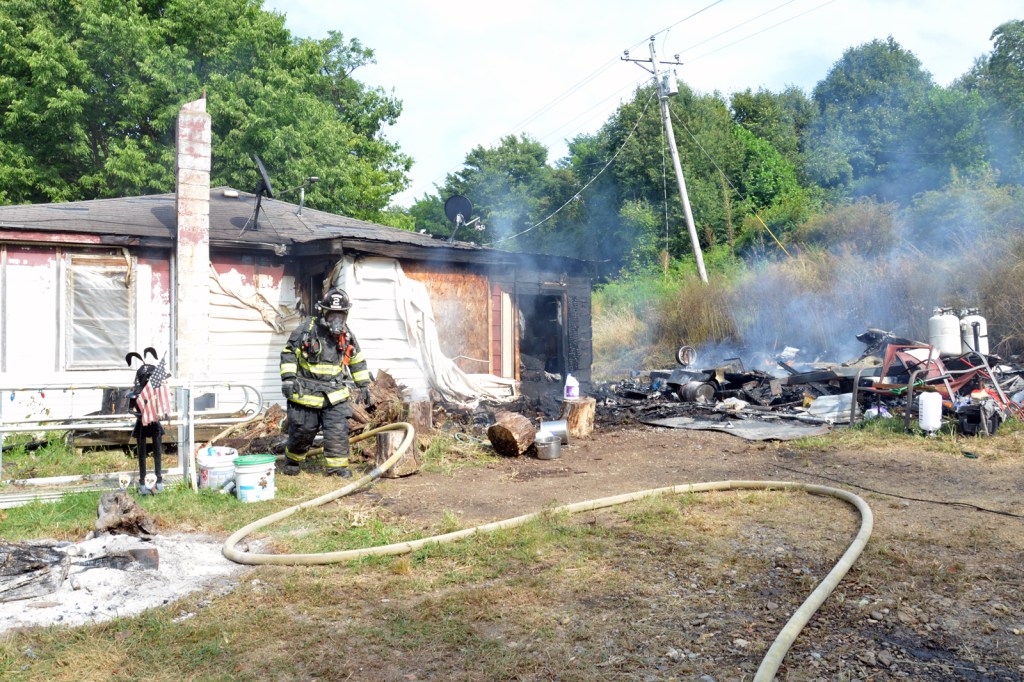 A camper parked behind Jay T. Crowe’s home at 12866 Lebanon Road caught fire and spread to the rear of Crowe’s home. Crowe said the smell of smoke woke him up from a nap and he was lucky he had cell service to call for help. (Photo by Robin Hart) 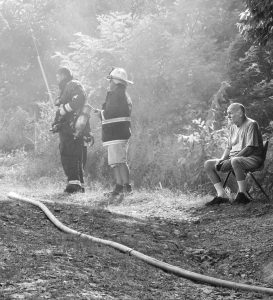 Jay T. Crowe, far right, sits and watches Boyle County firefighters work in heavy smoke as they try to save his home from burning down late Monday afternoon. (Photo by Robin Hart)

MITCHELLSBURG — Quick action and a dedicated force of firefighters prevented a home near Mitchellsburg from being completely destroyed by fire late Monday afternoon.

At 4:43 p.m., Boyle County Fire Department received a call about a structure fire at 12866 Lebanon Road, according to Assistant Fire Chief Jimmy Coffman.

Upon arrival, crews encountered heavy smoke and fire, Coffman said. Once the exterior fire was under control, firefighters began to extinguish interior flames.

Because of the location of the house fire, Boyle had to bring in tanker trucks of water, and had a total of six vehicles on scene. “It was a countywide response,” Coffman said. 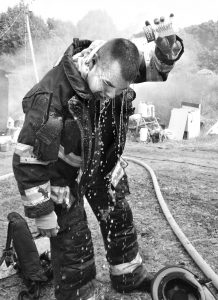 Lt. Chuck Ellis pours water over his head trying to cool down after working inside Crowe’s home on Lebanon Road. (Photo by Robin Hart)

Jay T. Crowe, who lived at the home, sat in a folding chair in the shade as he watched firefighters try to salvage whatever belongings they could. Crowe said he had been napping and was awakened by the smell of smoke in his home. He said he looked outside and saw the camper that had been parked behind his house was on fire and it had spread to the rear of his home. Crowe said friends had been living in the camper, but were away at work when the fire broke out.

“I appreciate you all coming,” Crowe told Coffman.

“I’m just glad they saved this part of my house,” Crowe said as he pointed to the front portion of the home.

Emergency Management Director Mike Wilder asked if Crowe needed lodging for the night and offered services from The Red Cross. However, Crowe said he had family he could stay with until he could move back in.