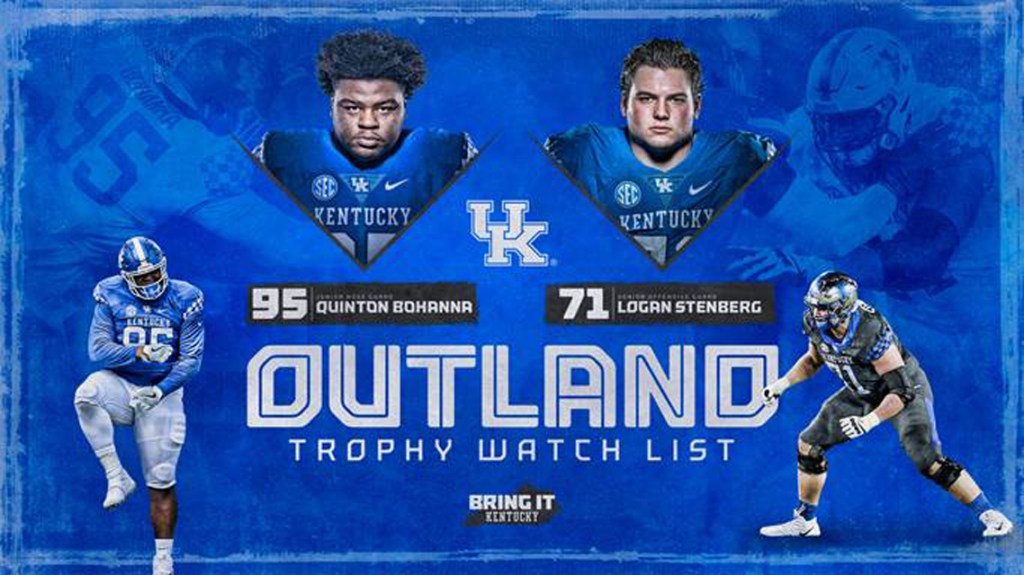 The Outland Trophy presented by the National Foundation for Infectious Diseases (NFID) is given annually to the nation’s top interior lineman.

Bohanna, a 6-foot-4, 361-pound junior nose guard from Memphis, Tenn., has played in 24 career games with 12 starting assignments, including the final six games in 2018. Last season, he also totaled 17 tackles, 4.0 tackles for loss, one sack, one forced fumble and a fumble recovery in leading UK to 10 wins for the first time in 41 years.

Stenberg, a 6-6, 321-pound senior of Madison, Ala., has played in 38 career games, starting the last 26. He was named a preseason Second-Team All-American by the Sporting News and was a third-team offensive selection by the media after grading out at 85.5 percent in 2018. He registered 78 knockdown blocks, 154 blocks at the point of attack and did not miss a single assignment all season. He allowed just one sack as well.

The Outland Trophy, now in its 74th year, is the third-oldest major college football award. Created in 1946 when Dr. John Outland presented the FWAA with a financial contribution to initiate the award, the Outland Trophy has been given to the best interior lineman in college football ever since. Dr. Outland, an All-American at the University of Pennsylvania in the late 1890s, eventually took up practice in Kansas City, Mo. An avid outdoorsman, Dr. Outland believed linemen did not get the credit they deserved and wanted an award to recognize them.