One Day: How a drama-free office manager makes it work at Pioneer Playhouse 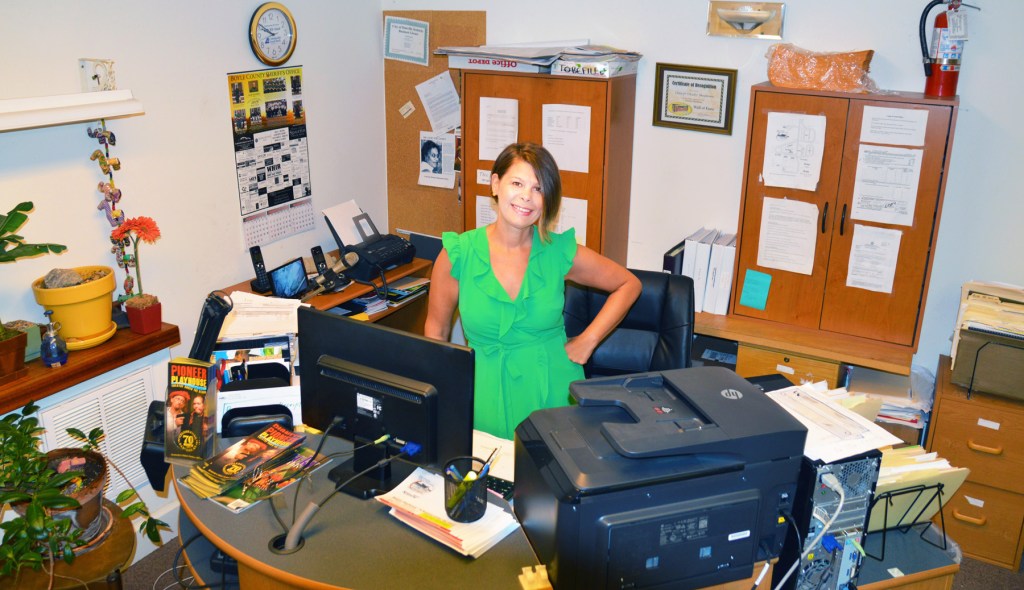 Callie Minks has been office manager for Pioneer Playhouse since 2012. She says her favorite part of working for the theater is the relationships she’s built. “The Henson Family is wildly creative and dedicated to this place, and to each other,” Minks says. (Photo by Bobbie Curd)

Callie Minks says during her first summer on the job at Pioneer Playhouse, “the Turtleman unexpectedly picked me up and turned me upside down one night, so I knew this was to be no ordinary job …”

That was a year after she started in 2012 as officer manager for the oldest outdoor theater in Kentucky. “And I didn’t know the first thing about the theater, but I love to learn anything new so I dove right in.”

She says at the playhouse, there’s never an average day — “Literally never a dull moment. This summer, I’ve walked into the office to find a table full of antique guns, wigs, Elvis glasses, fur coats and snow globes,” Minks says.

And she readily admits — she really likes predictability, so she’s had to learn to improvise. 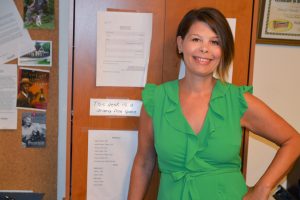 Minks keeps a “This desk is a drama-free space” handmade sign posted behind her desk. “We work with a lot of actors, and big personalities. And I love that. But I do finance,” she says and laughs. (Photo by Bobbie Curd)

“Two weeks ago, during our busiest play of the season, lightning struck the office building and fried our computers, phone lines and internet.” So she could continue to do her office duties, Minks plugged in an old rotary phone she found in the props room — “… and it worked!”

Now, she’s come to love how every day brings new and interesting events and people. “From actors, directors, volunteers, campers, patrons and employees. It’s a whirlwind, and after the season is over, it can feel a bit like a ghost town.”

However, she says when the season ends, that’s when her work really begins. “Lots and lots of paperwork. But I’m one of those weird people who loves paperwork.” Minks handles the financial responsibilities for the theater, such as payroll, keeping track of royalties to be paid, taxes and donations.

She says she does just about anything that’s needed, in addition to office work, but stays away from one task due to liability — “I’ll do anything except water the plants, because I’ll kill them …”

She loves helping Robby Henson, artistic director of the theater, with the behind-the-scenes work on his Voices Inside outreach program he brings to Northpoint Training Facility. “Robby made a fantastic and moving documentary, ‘I Come From,’ about his prison playwriting program that I transcribed for the hearing impared. I also type scripts that the prisoners have handwritten.”

However, her favorite part of working at Pioneer Playhouse is the relationships. “I’ve been so fortunate in my life to make lasting friendships with my coworkers … My box office staff is hilarious, year after year, and I miss them when they leave.”

She and Heather Henson, managing director, share an office space. “We’ve laughed, vented and cried together.”

And there’s one very simple pleasure she enjoys: “I really love Taco Friday,” Minks says. The employees and actors are all fed on the grounds together during the season.

Back before she came on at the theater, she was working out of town and missed one of her son’s performances in a talent show. “He probably doesn’t even remember that, but I knew then I wouldn’t be missing anything else, and chose to stay home with my kids a while.”

Minks says she wasn’t even looking for a job when someone told the Hensons about her. “I was enjoying my free time, but Charlotte Henson is very charming — and convincing,” she says about the matriarch of the Henson theater family, still very much involved with the day-to-day operations. And they agreed on a schedule that allowed Minks to take her boys to and from school.

She’s happy she made the decision. 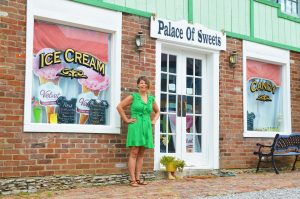 The Palace of Sweets in the 19th century Main Street village at Pioneer Playhouse holds a special place in Callie Minks’ heart. Both her sons grew up around the playhouse, volunteering to scoop icre cream during the season, and one is getting ready to head off to study theater in college.

“I am proud to work at Pioneer Playhouse because I believe in the power of the arts to move, to transform and to bring people together. The Henson Family is wildly creative and dedicated to this place, and to each other,” Minks says.

Not to mention, both her sons — Barrett and Britton — are both involved in theater; Barrett will be off to Northern Kentucky University to study theater in a couple of weeks.

“They grew up running around the playhouse, watching rehearsals, scooping ice cream at night and making friends,” Minks says. “I didn’t go looking for this job, but I’m so glad they found me.”