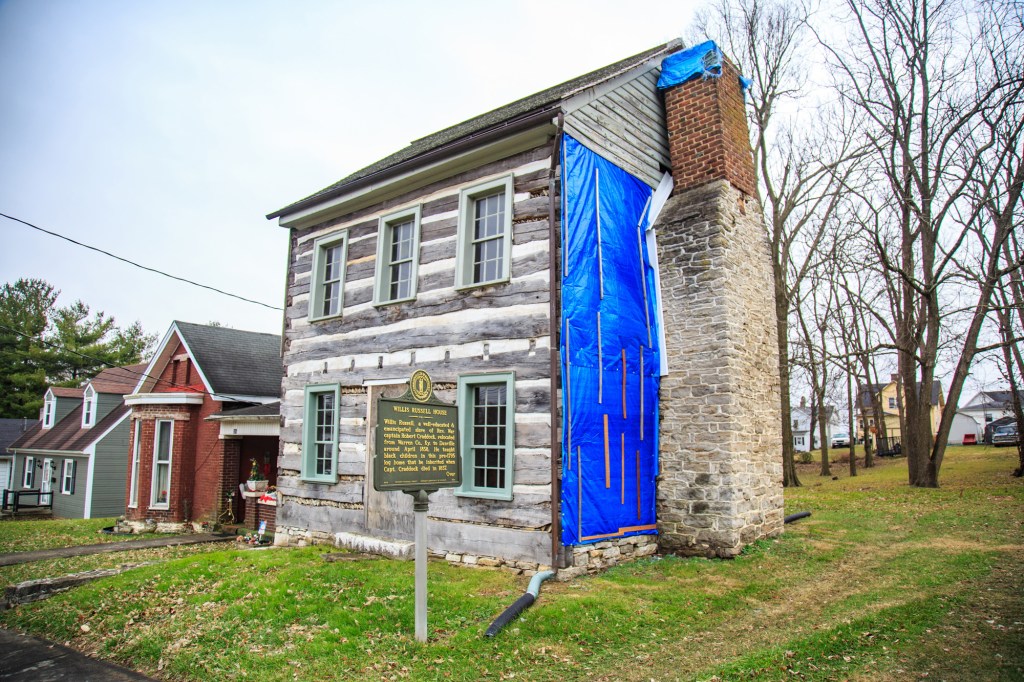 The structure known as the Willis Russell House in Danville has officially been added to the National Register of Historic Places. (File photo by Ben Kleppinger)

The Willis Russell Memorial House, a two-story log building that’s more than 200 years old located on East Walnut Street, has been named to the National Register of Historic Places after 35 years of work by those who were determined to preserve the special structure.

The log house dates to the 1790s “and has been a cherished landmark for decades, harkening back to the earliest days of Danville,” according to a news release from Boyle Landmark Trust.

The Trust has owned the property since the 1980s, and nominated it this spring to be included on the national register after completing extensive research and documentation.

The Willis Russell Memorial House compliments the recreated log structures in the Constitution Square Historic Site and reveals a residence from the same period as the public buildings that are displayed there, House said.

The formal name on the National Register is the “Thomas Barbee House,” even though locally it’s known as the Willis Russell House said James Hunn, BLT board member. He explained that through research, they discovered that the building may have actually been built by Thomas Barbee in the 1790s, and Willis Russell never owned it.

According to the release, The Willis Russell Memorial House was built around the same time that the Commonwealth’s first constitution was signed — just less than a block away — and had ties to several of Danville’s founding fathers. Barbee probably built the log house after he bought the land from John Crow, who had sold a tract that was the original plat of Danville to Walker Daniel.

Barbee served as the first postmaster west of the Alleghenies. When he died in 1797, the property passed to his brother Joshua, who was a founding trustee of Centre College.

For many years, Danville residents thought a former slave, Willis Russell, who was a well-educated man, taught school in the log house. He had received his freedom and inherited property along what is now Walnut Street after his owner, Robert Craddock, died.

When Willis took over his inheritance around 1840, he started one of the first schools for African American children west of the Allegheny Mountains. According to the release, deed research revealed that Russell never owned the property, which casts doubt on whether he taught school in that particular building.

The Willis Russell Memorial House exhibits well-preserved architectural elements that are indicative of the secondary log construction that was once the most common construction style used to build permanent residences in the grown settlements in Central Kentucky as the end of the 18th century, according to the release. “The use of unpeeled, old growth white oak logs and the distinctive V-notched corners reveal to modern viewers the techniques and architectural styles that were used for similar two-story log houses across the region.”

Former BLT board member Barbara Hulette said, “Listing on the National Register of Historic Places validates the importance of the 1790s log home, named the Willis Russell House. … It secures the indefatigable work which Cecil Dulin Wallace initiated in 1984 to preserve and protect the property’s history.”

Hulette added that even though Danville has evolved over the past 200 years, “this humble log house remained intact and now provides a unique example of the type of log construction that helped enable the settlement of Central Kentucky. Boyle Landmark Trust began for this very purpose — saving, documenting and telling the story of our earliest dwellings in the settling of Danville.”

And the Willis Russell House will always have a future, thanks to the BLT. Ben Miles, a consultant with Shire Environmental who wrote the nomination documentation for BLT, said the organization is working with the Kentucky Heritage Council to put a preservation easement on the property. Once the easement is completed, which will permanently protect its historic resources, BLT plans to sell the log house, as is — some stabilization work has been completed and a blue tarp still covers a side wall.

Whoever purchases the historic log house, “will have the responsibility and freedom to build it out to suit the next use.”