Boyle constable ran into burning home to save Mitchellsburg man 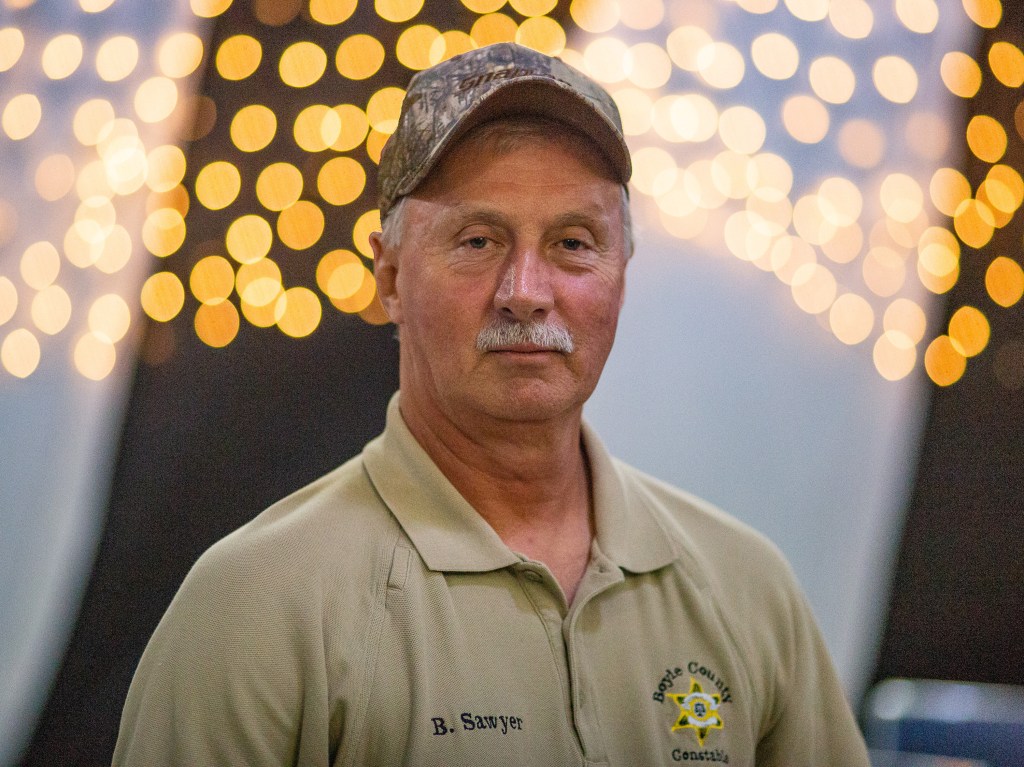 Boyle County Constable Buck Sawyer ran into a burning building Monday to help get a man inside out safely. (Photo by Ben Kleppinger)

A Boyle County constable may have helped save a Mitchellsburg man’s life Monday by getting him out of a burning building. But Buck Sawyer didn’t seek the limelight after his heroics; instead, the limelight came to him. 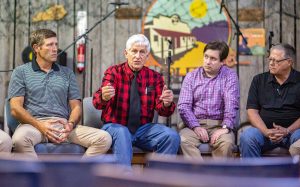 Boyle County Magistrate Tom Ellis, second from left, talks during Tuesday night’s “Pulse of the People” public forum. During the forum, Ellis praised Constable Buck Sawyer for his actions during a house fire on Monday. (Photo by Ben Kleppinger)

“Our wonderful Constable Buck Sawyer went in without equipment — because he didn’t have time to go get his fire protection equipment — and rescued that man, woke him up and helped carry him out,” Ellis said, earning a round of applause for Sawyer, who was seated toward the back of the Perryville Jamboree, where the forum was held.

The Monday-afternoon fire started in a camper behind the home of Jay T. Crowe and then spread to the home on Lebanon Road in the Mitchellsburg community. Crowe had been sleeping, but got out safely; Boyle County firefighters were able to get enough crew members and water to the remote location quickly enough to prevent the home from being a total loss.

Asked about the fire after Tuesday’s forum, Sawyer said he was “just doing my job.” It took some peer pressure from other first responders, who were calling him “Star-Buck Sawyer,” before Sawyer agreed to relate what had happened.

“We had a guy come by the garage and say there’s black smoke rolling,” Sawyer said. “We went and checked it out. We got there and we found out the back of the house was on fire. I knew the guy that lived there … I knew he was inside, so I hollered at dispatch and told them I was going in to get him out.

Sawyer isn’t a stranger to fires — he has 30 years of experience as a firefighter and still works for the Perryville Fire Department. He fights fires in addition to serving as constable, an elected position that comes with some law enforcement authority but has few officially designated duties. Constables often serve in support roles for formal law enforcement agencies, such as the sheriff’s office.

“He’s one of the good constables,” Sheriff Derek Robbins said.

Sawyer said because of his firefighter training, he knew what to do when he realized he had to enter the burning building.

“I just kind of covered my face with my shirt, got down low to get below the smoke, and got him out safely.”

Sawyer said he enjoys his work as a constable, and he learns a lot from Sheriff Robbins and the deputies he works with.