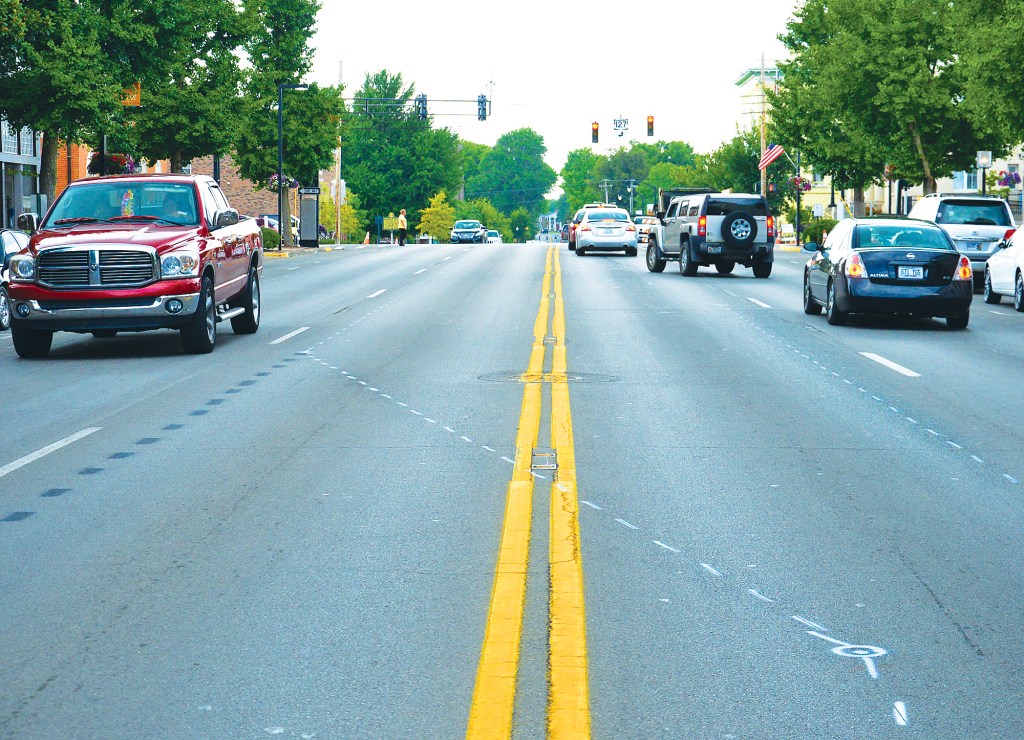 Motorists who travel on Main Street will experience a new way to get to their destinations when the transportation cabinet implements its lane reduction and dedicated turning lanes on a trial basis beginning today or Friday.

Dotted white lines have been painted on Main Street, designating where traffic will be required to travel, as left-hand turning lanes are added. 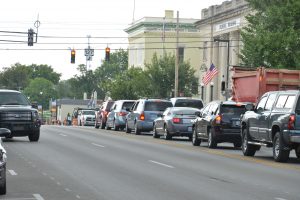 Traffic is lined up waiting to turn left from Main Street onto Fourth Street Wednesday evening. (Photo by Robin Hart)

As of Wednesday evening, no new traffic signals had been installed, and a few downtown business owners were unsure when exactly the lane reduction was to take place.

The lane reduction is supposed will result in one lane for traffic in each direction on Main Street, with a shared center lane for left turns. Four weeks into the trial, the state plans to hold a public input meeting.

Natasha Lacy, from the KYTC communications office was in town Wednesday passing out information about a meeting for downtown business owners that will be held in two weeks to discuss the traffic modifications. It will be held at 1:30 p.m., Tuesday, Aug. 13 at Danville City Hall. Business owners were being invited so they could meet with engineers from the state Transportation Cabinet and a representative from the University of Kentucky who would answer any questions they may have about the new traffic flow, according to the news release.

At the end of the six-week trial period, the state will review traffic flow data and decide whether to keep the new arrangement when it resurfaces Main Street later this year.

Boyle County Judge-Executive Howard Hunt said his office hadn’t had much communication with the KYTC about the lane changes, but he felt that the test project would just be “blowing in the wind without a dedicated traffic light” with a left-turn signal.

Police “will be visible and assist in any way we can” during the change, he said.

“I think it will be hard for some as they take the same route to their favorite everyday (destination.) It will change some routines,” Gray said. “But I am excited to see how it looks and functions. I believe we should give it a try.”