Danville water tower project remains a mystery to many 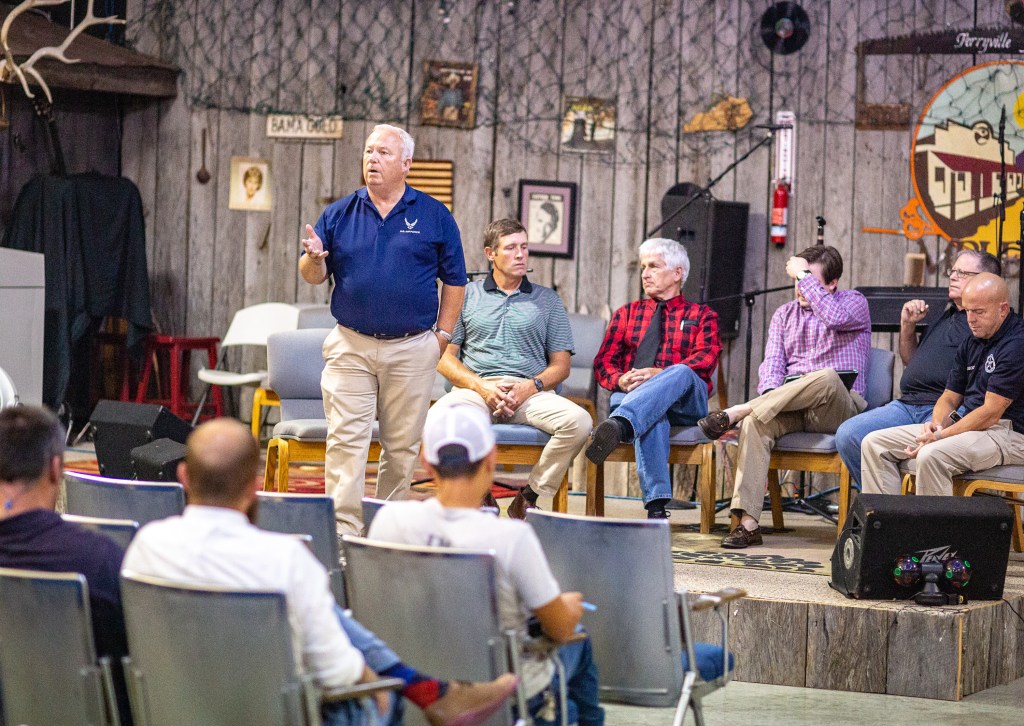 Boyle County Judge-Executive Howard Hunt, standing, welcomes a crowd of around 50 to Tuesday night's "Pulse of the People" public forum, held for residents of Magesterial District 1 at the Perryville Jamboree. (Photo by Ben Kleppinger)

Rodney Marlowe wishes he knew more about the man who came to his house on Tuggle Road and took photos of his property last week. Boyle County and Perryville officials say they wish they had some answers for Marlowe, but they’ve been running into a wall with the City of Danville — the organization that apparently sent the property assessor to Marlowe’s home.

Danville is upgrading a water line that runs to Perryville and planning to build a water tower near Tuggle Road, where Marlowe lives. It’s part of a larger project to improve water service to the Boyle County Industrial Park and to the east of Danville. Hubert Excavating was awarded the project in two phases in May 2018 and is getting paid a little more than $1 million for the work, according to news archives.

At Tuesday night’s “Pulse of the People” public forum in Perryville, Marlowe said the project’s being handled poorly, at least in his neck of the woods. 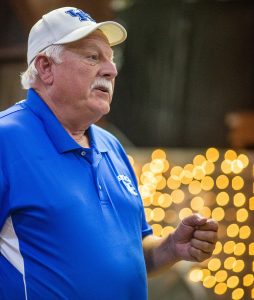 Rodney Marlowe talks Tuesday night about the lack of information he has been able to find about plans for a water tower that could be built in his “back yard.” (Photo by Ben Kleppinger)

Marlowe said several months ago, a man knocked on his door. The man told Marlowe he was with the City of Danville Water Department and the city was going to be building a water tower in his backyard. Marlowe said he invited the man in to talk, but the man declined.

“He said, ‘We might as well just go out there and I’ll show you where we’re going to build it,” Marlowe said. “That’s kind of a rude way to address somebody, to start with.”

The man told Marlowe someone would be out that same week to appraise his property, but no one showed. Marlowe said he asked the man from the water department to have anyone coming out give him a call ahead of time. Months passed, then just last week, “a fellow calls me from Lexington and says … ‘I couldn’t come in your house because you wasn’t there,'” Marlowe said.

The man took photos of his property, but Marlowe said he can’t get any more information than that — in fact, the man told him he can’t share with Marlowe information about his assessment because of a confidentiality clause in his contract.

“It’s like the whole thing is top-secret,” he said. “I thought everything should be on public record.”

Judge-Executive Howard Hunt said Boyle County has “made some inquiries” about what’s going on with the project, but Danville hasn’t provided much beyond the fact that “there are some negotiations going on.”

“We’ve been told that right now is not the time to be asking questions,” Hunt said. “I don’t know what the right time is going to be. It’s not my project; it’s not the county’s project. We want to help and make sure it’s done right. But we really don’t have a dog in the fight, except to maybe help you guys that are constituents.”

Meeting could result in answers

Magistrate Tom Ellis said he hopes to find some clarity about the water tower project and the recent sewer-rate hike from Danville — an issue that still has Perryville water customers spitting bullets more than a year later — during an upcoming meeting of the Asset Development Committee, a committee of the Economic Development Partnership.

Ellis said he expects to attend the public committee meeting, along with Hunt and Danville Mayor Mike Perros.

“Thank you for being here Mr. Marlowe, because I know exactly how you were approached and how an adjoining farm owner was approached,” Ellis said.

“When you talk about negotiations, it takes two people to negotiate,” Marlowe said. “The only contact I’ve had from anybody at the water department was that one time. So it doesn’t sound like much of a negotiation.”

“It doesn’t sound like much of a negotiation to me, either,” Hunt said. “And that’s not my idea of negotiation — one-way communication. I really don’t know right now what’s the best way to approach it other than what Magistrate Ellis said.”

Perryville Mayor Brian Caldwell said he has raised questions about the water-tower project before and never received any satisfactory responses from Danville.

‘A pile of hootie’

Another area resident, Rob Kernodle, has been trying to get answers, as well. He has family members who own farmland adjacent to Marlowe’s home. Kernodle said his family members haven’t so much been approached by anyone from Danville about a potential water tower site as they have “been informed” something may be happening.

Kernodle filed an open records request with Danville last Friday for “all files, documents, records and emails pertaining to the water tower on U.S. 150 at Tuggle Road,” he said.

By law, public agencies have three days to respond to open records requests, which means Danville should have responded by Wednesday, July 31. But Kernodle said he was told a city employee was on vacation and no one saw his request, so now Danville plans to get him a response by Friday.

“I’ll be surprised if you get it in three days,” Hunt told Kernodle.

“It’s frustrating to me, living here in Perryville — in the last year and a half, I’ve paid about $1,500 additional for my water bill,” Kernodle said, raising the other sticking point on water service that many in Perryville have with Danville. “We had an old saying when I was growing up in Arkansas — ‘That’s a pile of hootie.’ They’re in the middle of negotiations and it’s not time to be asking questions? That’s a pile of hootie. When else do you ask questions?”

Hunt defended Boyle County Fiscal Court as not being a part of the project and Kernodle said he knows it’s not the county he has a problem with.

“I think it’s just the City of Danville — they’ve always looked this way with slanted eyes, if you will.”

“It’s jealousy,” said Jason Cullen, magistrate for District 4 on the east end of the county, who attended the forum. “You guys have the jewel of the county. So much history … I’m baffled how they’re going through early stages of eminent domain to take up land —”

“That term has not been mentioned,” Ellis interjected.

“It doesn’t have to be mentioned,” Cullen said. “You say some words and that’s something that automatically comes to mind — ‘Hey I’m coming to take your property for the benefit of …’ Wait a second, you’re a city coming into the county to take over property without even talking about it. So that disturbs me as someone from this county.”

Danville City Manager Ron Scott was not available for comment Wednesday because he was on vacation, according to a person in his office. Danville Municipal Utility Engineer Earl Coffey did not return a call asking for comment on the water tower project Wednesday.

Danville Mayor Mike Perros said Wednesday the city would provide information when it was able to.

“At the appropriate time, I’m sure the City of Danville will be more than glad to share any and all information,” Perros said. “At this point in time, it would be very inappropriate for me to make any further comment.”

Marlowe said whatever happens, he would like some more courtesy from Danville in how they treat him.

“This fellow came from Lexington and took pictures of my house. Would you appreciate somebody just driving up your drive and going out there and taking pictures of your house without you knowing?” he asked. “I would like for anyone from the city, county or state, whatever, to call me.”