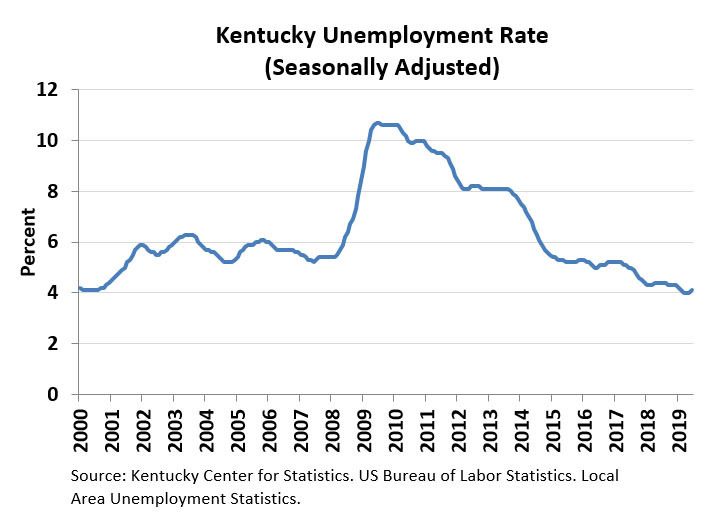 The preliminary June 2019 jobless rate was down 0.3 percentage points from the 4.4 percent recorded for the state in June 2018.

The U.S. seasonally adjusted jobless rate for June 2019 was 3.7 percent, up 0.1 percentage points from May 2019, according to the U.S. Department of Labor.

Labor force statistics, including the unemployment rate, are based on estimates from the Current Population Survey of households. The survey is designed to measure trends in the number of people working. It includes jobs in agriculture and individuals who are self-employed.

In a separate federal survey of business establishments that excludes jobs in agriculture and people who are self-employed, Kentucky’s seasonally adjusted nonfarm employment increased by 4,100 jobs in June 2019 compared to May 2019. Kentucky has added 20,700 jobs since June 2018, for a growth rate of 1.1 percent.

“Kentucky employers added 4,100 jobs to their payrolls in June,” said University of Kentucky’s Center for Business and Economic Research (CBER) Interim Director Mike Clark, Ph.D. “This increase in the number of jobs in Kentucky is well above the average monthly change of 1,725 jobs over the past 12 months. However, the figure is somewhat tempered by a reduction in the number of people working. This pushed the state’s unemployment rate up slightly for June.”

Nonfarm data is provided by the Bureau of Labor Statistics’ Current Employment Statistics program. According to this survey, seven of Kentucky’s 11 major nonfarm North American Industry Classification System (NAICS) job sectors saw employment increases from the previous month while three declined and one was unchanged.

Kentucky’s professional and business services sector added 1,400 jobs or 0.6 percent in June 2019. This sector was down 800 jobs since June 2018. All three subsectors showed gains in June 2019 with professional, scientific and technical services adding the most with 800 jobs.

“Professional and business services recovered employment loses from the previous month,” said Clark. “In spite of these monthly fluctuations, the overall employment level for this sector has generally been flat for the past couple of years.”

The financial activities sector reported 300 more jobs in June 2019. The sector is up 400 jobs compared to last June. The real estate, rental and leasing subsector declined by 100 jobs, while the finance and insurance gained 400 jobs.

Kentucky’s leisure and hospitality sector added 100 positions from May 2019 to June 2019. Accommodations and food services category decreased by 200 jobs, while the arts, entertainment and recreation subsector increased by 300 jobs. This sector is up 4,100 positions since June 2018.

Employment in the information services sector was unchanged in June 2019. This sector has decreased by 200 jobs since June 2018. The industries in this sector include traditional publishing as well as software publishing; motion pictures and broadcasting; and telecommunications.

Construction employment decreased by 100 jobs in June 2019. The construction sector was up 2,200 jobs during the past 12 months for a gain of 2.8 percent.

Kentucky’s statewide unemployment rate and employment levels are seasonally adjusted. Employment statistics undergo sharp fluctuations due to seasonal events, such as weather changes, harvests, holidays and school openings and closings. Seasonal adjustments eliminate these influences and make it easier to observe statistical trends. However, because of the small sample size, county unemployment rates are not seasonally adjusted.