People accounted for in area of Lincoln Co. explosion; witnesses react to what they saw 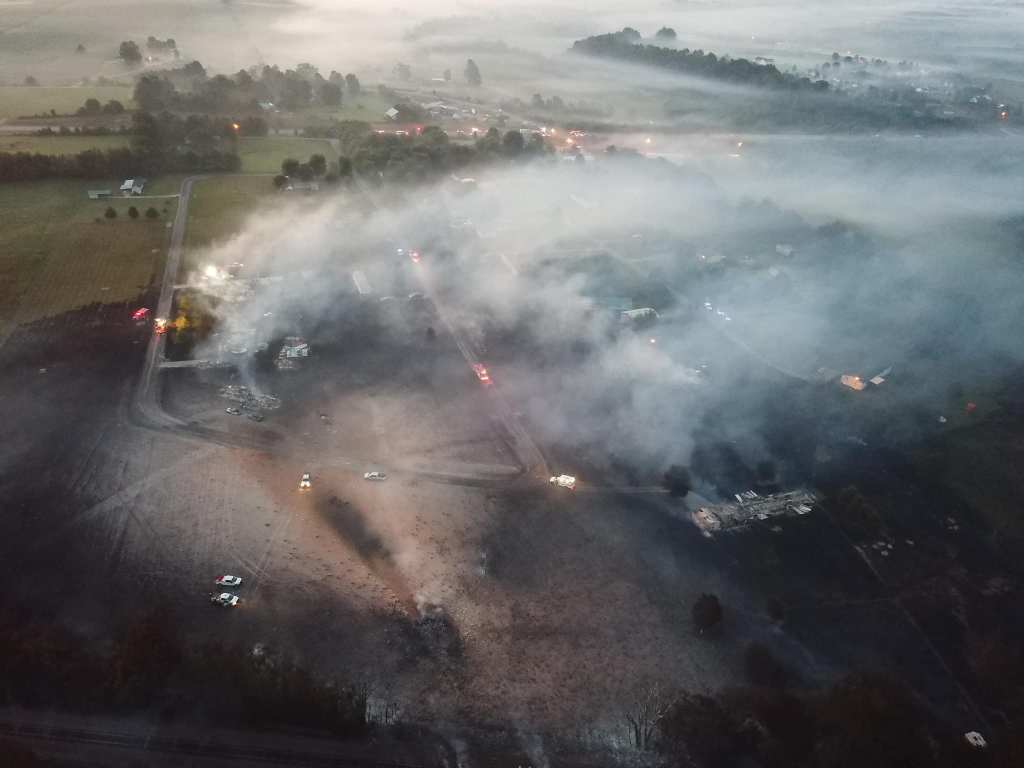 Jeffries Lane resident Matt Wood took aerial photos with his drone at 6:15 a.m. Thursday morning, after the explosion which happened shortly after 1 a.m.

By BEN KLEPPINGER and BOBBIE CURD

Everyone has been accounted for following a natural gas pipeline explosion in Lincoln County early this morning.

The explosion killed one and injured five; initially, it was unclear how many others may have been hurt or killed by the explosion, which rocked the Indian Camp subdivision off of U.S. 127 in the Moreland area around 1:20 a.m. Authorities asked everyone from the area to head to New Hope Baptist Church to be accounted for.

Around 10:30 a.m. Thursday, everyone had been accounted for, said Trish O’Quinn, deputy emergency management director for Lincoln County. 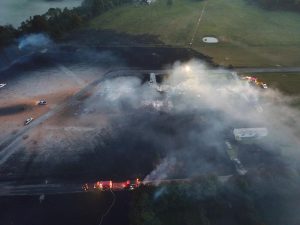 “The main thing is everybody is accounted for. We did have the one fatality,” O’Quinn said.

Hopefully, the five injured by the massive blast will recover, she added.

“As of right now, everything seems to be stable. We have not got any more missing people,” she said.

A stretch of U.S. 127 is shut down while first responders continue to work the scene and gas company representatives investigate their pipelines, O’Quinn said.

“Hopefully, we’ll get this wrapped up in the next few hours for the people here, but it’s going to be an ongoing (investigation) for a while,” she said.

Everyone is being asked to continue avoiding the area for now. The Red Cross is providing food, water and blankets for those evacuated from their homes and first responders at New Hope Baptist Church, at the intersection of U.S. 127 and Ky. 1194, O’Quinn said.

Fighting the multiple fires caused by the explosion was tough on the firefighters — “we’ve had to keep rotating,” O’Quinn said. “They get very hot. It was a very hot situation, especially at the beginning.”

O’Quinn said Lincoln County is fortunate to have good working relationships with neighboring counties and cities. Numerous other first-responder agencies also responded to help, and Russell County sent two EMS ambulance crews to cover Lincoln County EMS needs while local responders were at the scene of the explosion, she said.

“This is why we do our mass-casualty drills, to get everybody working together,” she said. “… When something does happen, it really does pay off in an instance like this. You’re not meeting a stranger, you’re working together with a friend.”

There are no active fires remaining in the area, but firefighters are continuing to watch for and put out hot spots, O’Quinn said. It will likely be at least three to four more hours before U.S. 127 can be reopened.

‘He thought we were under attack’

Laura Kirkpatrick, a Lincoln native, was in town visiting her family, but wasn’t at her mom’s house when the explosion happened. She panicked as soon as she heard, due to how close her mom and stepdad, Jodi and Denver Coulter, live to where the suspected gas line exploded.

“They can’t remember exactly how they woke up, but my stepdad is a former Marine and he seriously thought we were under attack,” Kirkpatrick said. “The sky was white, like a nuclear bomb had hit.”

By the time she was able to reach them, she said “they were in shock. They were just sitting there, bewildered, like ‘how did this happen, and what was it.’”

Her mother was taken to the ER for burns on the back of her arms, but has since been discharged. Kirkpatrick said her mom and stepdad told her they didn’t think they were going to make it out alive.

“They saw everything melting in front of them. Denver’s body physically hurts from how fast and vigorous they had to run out of there, and he also had burns on his head, but I don’t think he realized it.”

Both of their vehicles were burned in the blast, as well. Kirkpatrick showed an aerial picture posted by a Lexington news station, with her mom and stepdad’s former house location circled, which is nothing but a pile of gray rubble.

“They lost everything. Their home, even their vehicles from the front yard,” Kirkpatrick said. “But, they’re alive. One person didn’t make it out alive.”

Bobbie Kitchen, a Boyle County resident, was at her boyfriend’s house on Jeffries Lane, just off of U.S. 127 and not too far from the site of the explosion. She said people in the area were outside, looking at the massive flame bursts, which could be seen for miles. 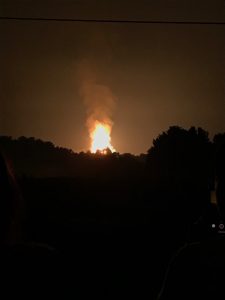 A photo taken around 1:24 a.m. by Bobbie Kitchen, who was on Jeffries Lane at the time of the explosion, shows how brightly the 300-feet flames lit up the area. “We didn’t know what it was …” Kitchen said.

She witnessed the scene around 1:24 a.m., just minutes after when officials say the explosion occurred.

“I didn’t hear the explosion, we just thought it was a huge fire,” Kitchen said. “It was gigantic, and was like a bubbling noise, and it totally lit up the sky.”

Kitchen had to take a detour, like many other morning travelers, to get to her early-morning bakery job in Danville due to the end of Jeffries Lane being shut down.

Matt Wood, who also resides on Jeffries Lane with his family, said he wasn’t awoken by the explosion but his wife was. “Then people began calling me about my parents, they live in that neighborhood. They’re fine — the house has a significant amount of damage, but it’s still standing.”

Wood flew his drone over the area once the fire was put out and took pictures of the devastation. He said his brother and niece, who were at his parents, were treated in the ER for smoke inhalation, but both are fine.