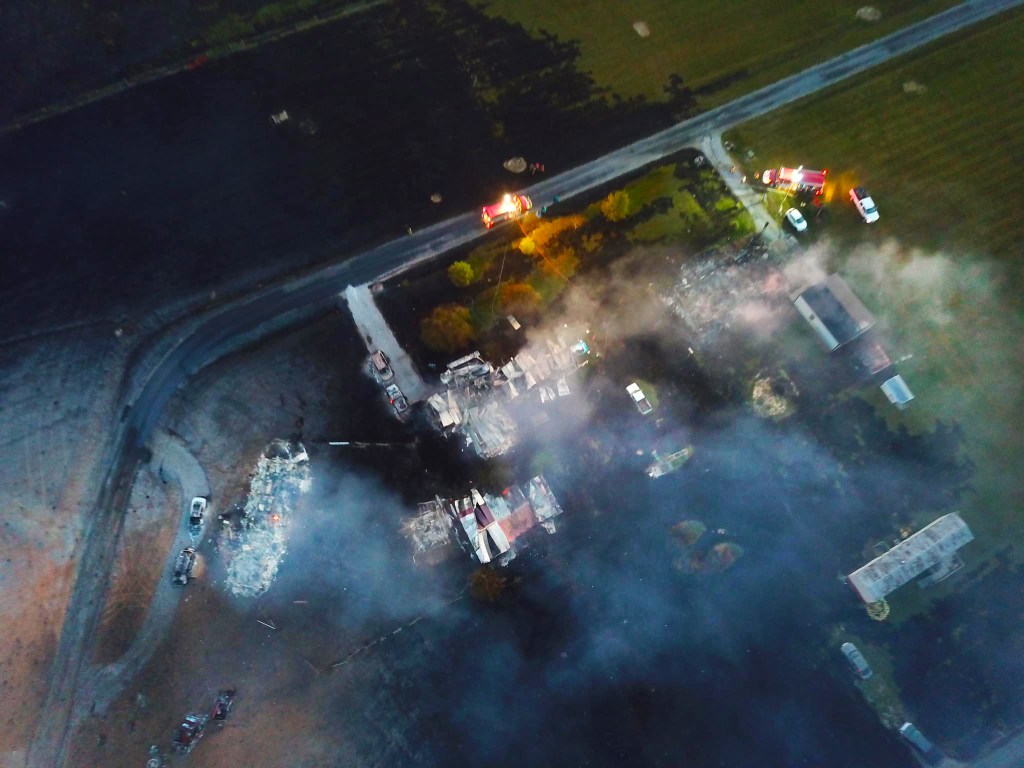 An aerial photograph taken by Matt Wood, a resident on Jefferies Lane, with his drone shows the extent of damage from the gas pipeline explosion in Lincoln County.

Officials are baffled with how the pipeline explosion affected an area of Lincoln County early Thursday morning. At 1:20 a.m., the natural gas line exploded, sending an enormous fireball an estimated 300 feet into the sky; it could be seen from counties away, including Fayette, and many who live several miles from it have said they could feel the heat.

The explosion was in the Moreland area, greatly affecting the Indian Camp subdivision. 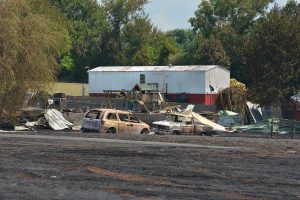 The remnants of two trailers sit beside a lawn table and chairs. (Photo by Robin Hart)

One resident — Lisa Denise Derringer, 58 — was killed in the explosion; her death is still being investigated by the Kentucky State Medical Examiner’s Office.

Several people were treated for injuries. Officials say the explosion area spans four or five acres; at least five homes were completely destroyed, but others were left virtually untouched.

Thursday during a press conference, Kentucky State Police’s media liaison, Trooper Robert Purdy, said due to the area impacted by the explosion, it has been “really surprising” there were not more casualties or destroyed structures and homes, especially due to the early-morning hour it happened, when most are at home and asleep.

The natural gas pipeline is owned by Enbridge Inc. and operated by Texas Eastern Gas Pipeline Co. An incident commander with Enbridge, Jim McGuffey, said it “could take three days or could take a week” to find the answer of what made the pipeline rupture.

Officials said a resident who was leaving the scene of the incident described it as looking like Mars — the affected area has no trees or grass left, and an asphalt road in the area was turned into gravel.

Viewing the explosion site from a field adjacent to the Indian Camp neighborhood, the entire area is black, flat and barren. Pockets of smoke were rising above the ground and several wooden fence posts were still burning. Vinyl siding on homes closest to the fire appeared to have dripped off, and burned out vehicles sat in driveways.

As a helicopter circled overhead, KSP Troopers stationed at the entrance to the neighborhood began allowing only residents into the area to secure their homes and pick up any necessary items they needed.

Earlier in the day, officials asked residents of Indian Camp to report to New Hope Baptist Church in Moreland, so that a headcount could be taken; there were still people reported missing after the explosion. Around 10:30 a.m. Thursday, everyone had been accounted for, said Trish O’Quin, deputy emergency management director for Lincoln County.

“As of right now, everything seems to be stable. We have not got any more missing people,”  said Trish O’Quin, deputy emergency management director for Lincoln County.

A stretch of U.S. 127 was shut down for hours and travelers advised to avoid the area, with detours for those trying to head into Danville, in order to give first responders room to work and gas company representatives time to investigate their pipelines. The road was opened back up around 2:30 p.m.

O’Quin assured “it’s going to be an ongoing (investigation) for a while.”

Those who have been displaced by the explosion are being sheltered at New Hope Baptist Church in Moreland. O’Quin said the community has been amazing; the church has received more food than it knows what to do with, and organizers are currently working to set up a plan to facilitate donations.

“My office and I are closely monitoring a significant explosion of a natural gas transmission pipeline near Danville …” a release from his office states. “Obviously the investigation is just beginning. My staff and I will continue to stay on top of this and be a resource for everyone affected. This morning, our prayers are with all the families whom this disaster has touched, and our gratitude is with all the first responders who rushed toward towering flames to protect their neighbors and communities.”

An American flag was flying high Thursday afternoon where a home had once been in Indian Camp subdivision. The fire destroyed homes and scorched the ground, but stopped right before consuming the flag.(Photo by Howard Hunt)