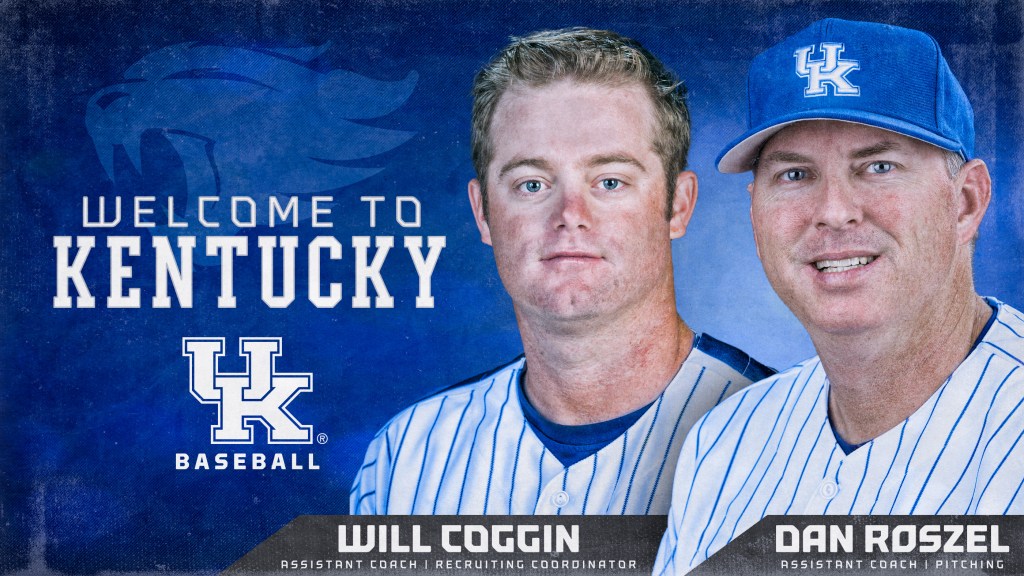 LEXINGTON– Dan Roszell, who has nearly two decades of impressive coaching credentials, and Will Coggin, a former player and coach in the Southeastern Conference, have been added to Kentucky’s baseball staff as assistant coaches, it was announced Wednesday.

Roszel comes to UK from East Carolina, where he has mentored one of the most consistent pitching staffs in the country during his nine years with the Pirates. Chris Sale, a six-time finisher in the top five of the American League Cy Young Award race, headlines a list of 11 major leaguers he has groomed.

Coggin will join the Wildcats’ staff as an assistant coach and recruiting coordinator, reuniting with UK coach Nick Mingione after the two previously worked together at Mississippi State. He has been a part of five conference championships in his nine years of coaching.

“I’m thrilled to welcome Dan and Will to Kentucky,” Mingione said. “They bring a wealth of experience and success to our program. They are winners who can connect with young men and develop them as students, people and players. I’m excited for them to get started.”

Roszel comes to Lexington after 19 years of high-level success at four programs, including the past nine seasons at East Carolina where the Pirates finished in the nation’s top 50 in earned run average seven times. East Carolina advanced to six NCAA Regionals during his nine years on staff.

“Dan is exactly what we were looking for,” Mingione said. “He has a track record of winning, he’s committed to helping student-athletes win all areas of their lives, and he’s a proven developer of Major League Baseball pitchers. He’ll be an invaluable resource for our program.”

In 2019, Roszel disciple Jake Agnos was named to six All-America squads and set the American Athletic Conference’s single-season strikeout record with 145 in 102.0 innings on his way to being named the 2019 AAC Pitcher of the Year. He was selected by the New York Yankees in the fourth round of this summer’s draft.

In his 19 seasons as a coach, Roszel has seen 30 of his pitchers sign professional contracts, headlined by MLB all-star Chris Sale, who he coached while at Florida Gulf Coast. Sale, who has finished in the top five of the American Cy Young Award vote six times, was selected 13th overall by the Chicago White Sox in the 2010 draft. In 2014, Hoffman became Roszel’s highest draft pick when taken ninth overall by the Toronto Blue Jays.

After completing his playing career at the University of North Florida, Roszel broke into the coaching ranks and within three seasons had joined Gardner-Webb University, where he saw two first-day draftees in four years. From there, Roszel went to Florida Gulf Coast for two seasons, helping the Eagles win an Atlantic Sun Conference title in its first season at the Division I-A level, the only team in NCAA history to accomplish that feat. Before settling at East Carolina, he spent two seasons at College of Charleston, where three of his pitchers were selected in the 2010 MLB Draft as the Cougars came within one win of a Super Regional appearance.

“My family and I are extremely excited to join the UK family,” Roszel said. “Nick Mingione’s vision for the program of developing young men as students, people and players, his leadership style and the Lexington community were all important factors in our decision. This is a dream come true. We can’t wait to get to work, invest in the community and start building lasting relationships.”

Roszel, a 2000 graduate of North Florida, and his wife Melissa have three children, Madyson, Makenna and Clayton. Roszel received his degree in criminal justice with a minor in political science.

Coggin Known as a Winner

Coggin will reunite with Mingione after the duo had a successful tenure together at Mississippi State. The former Bulldogs infielder and assistant coach has proven his salt as a recruiter and hitting guru who has helped develop multiple big leaguers.

“I’m ecstatic to welcome Will to Kentucky,” Mingione said. “I watched his transition from player to coach first hand and then his evolution into one of the elite recruiting coordinators in the country.

“He’s a winner. He’s won at every step of his career: he’s been to Omaha as a player, he won multiple conference championships while coaching at St. Johns River State College and the SEC title at Mississippi State. He was an integral part of the success we enjoyed in Starkville and will be an indispensable piece of reaching our goal at Kentucky of reaching Omaha.”

“I’m excited for and appreciate the opportunity to reunite with Coach Mingione,” Coggin said. “The University of Kentucky is a special place and I can’t wait to get started.”

Coggin was a staff member on the 2016 club that won the SEC championship, was a national seed in the NCAA Tournament and saw 11 players selected in the Major League Baseball Draft. It was his second stint in Starkville, having played for the Bulldogs from 2007-08 and served on former UK and Mississippi State coach John Cohen’s staff from 2009-12. He spent three seasons at St. Johns River State College in Palatka, Fla. before returning to State before the 2016 season.

During that 2016 season, the Bulldogs showed drastic offensive improvement, as their team batting average improved by 42 points (.271 to .313), on-base percentage jumped from .372 to .407 and slugging percentage exploded by 91 points. The club hit 30 more home runs, 60 more extra-base hits and scored 90 more runs on the way to 20 more wins.

Coggin had a hand in the development of all-time SEC hits leader Jake Mangum and 2017 SEC Player of the Year and First-Team All-American Brent Rooker, two of the most accomplished players in Mississippi State’s history.

Following the 2016 campaign, Coggin, a native of Booneville, Miss., was promoted to the assistant coach and recruiting coordinator role Mingione held before accepting the Kentucky job. The two worked hand-in-hand at State for five seasons, during which time the program went to two Super Regionals and won both a SEC regular season title and conference tournament title (in different seasons).

In between his two stints at Mississippi State, Coggin helped St. Johns River State College post 122 victories in three seasons, including a 57-14 mark in the Mid-Florida Conference. The 122 wins from 2013-15 were the most by a Florida junior college and the program spent time in the top five nationally in 2014 before being ranked No. 1 for much of the 2015 campaign. The Vikings won a school-record 47 games in 2015, won three straight league titles for the first time since 1966-68 and won their first Florida State Tournament game in 38 years.

While at SJRSC, Coggin’s calling card was player development, where 25 players went on to sign with Division I-A programs and 45 with four-year schools. Current big-leaguer Nate Lowe earned NJCAA First-Team All-American honors in 2015 after hitting .372 with 59 runs, 53 RBI and 17 home runs in 56 games before signing with Mississippi State.

What They Are Saying About Roszel:

“Coach Roszel, he really just caught my eye, with the guys he’s had and just how well he’s developed some of those guys. I really trusted him in my development. Coach Roszel really taught me how to pitch, being able to locate all my pitches. I just have a real natural feel for the game now.” – Colorado Rockies pitcher Jeff Hoffman

“I’m more pro ready after the experience with East Carolina and working with the best pitching coach in the world, Dan Roszel. I’ve learned so much about pitching (from him).” – Oakland Athletics pitcher Jharel Cotton

“During my junior year, we got a new pitching coach – Dan Roszel – and we clicked. He saw something in my mechanics. After one year working with him, I became a consistent starter. Coach Roszel helped me learn how to pitch. By my junior year, I was up to 95-96 and I began to earn his trust. We worked well together and we talked a lot about how to set up hitters, where to concentrate throwing them and reading swings.” – MLB veteran pitcher Mike Wright

“Dan Roszel is a fantastic hire for Kentucky. He’s long been regarded as one of the best pitching coaches on the East Coast because he has a great temperament for teaching and a keen baseball mind. His track record speaks for itself: he has a real knack for helping young arms unlock their potential. And he also deserves plenty of credit for identifying promising talent on the recruiting trail, then helping them develop into impact players at the collegiate and pro levels. He’s a man of high character, and he’ll do great things at Kentucky.” – D1Baseball.com national analyst Aaron Fitt

The Will Coggin File

What They Are Saying About Coggin:

“I owe Coach Coggin an enormous amount of credit for my growth and success as a hitter. His extensive knowledge of the swing is something that is extremely hard to find and would be incredibly valuable to any hitter. His relationships with recruits and players is second to none and will no doubt aid in the building and sustained success of any program.” – Brent Rooker, 2017 SEC Player of the Year and All-American

“Coach Coggin was the man! It always blew my mind when I would go to the field late at night and still see his car there (and him) working in his office. He loves baseball and loves to win. He brought the energy every day and his work ethic is unmatched. That’s what you’re looking for in a coach.” – Jake Mangum, SEC all-time hits leader

“Never have I been helped as much by any coach, and by a human, as the things Coach Coggin has done for me. From a small-town junior college to the biggest stage in college baseball, he has been the first person that I look to for support. Twenty-four hours a day and 365 days a year, I know that I’ll receive honest advice. There is not a harder working coach in all of baseball than Coach Coggin.” – Tampa Bay Rays first baseman Nate Lowe